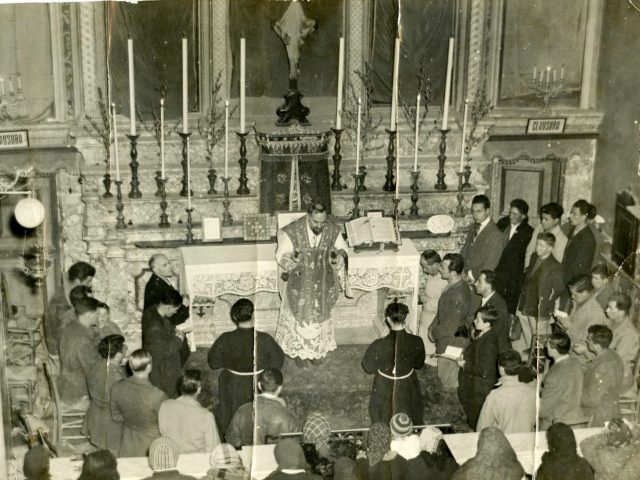 Mario Avignone’s stint in the Army turned out to be a blessing, as it led to a friendship with a most remarkable man.

Mario Avignone was born in Chicago and raised in the Roseland community. He was employed by the Sherwin Williams Co. when Pearl Harbor was bombed. He decided to enlist in the Army Air Force in January 1942. 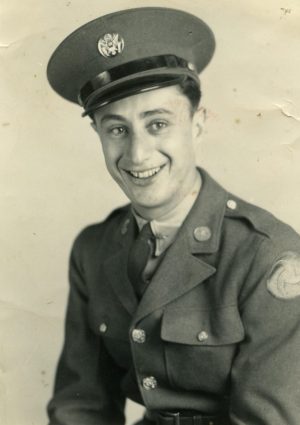 Avignone met his future wife while training at Casper, Wyoming, and they married later that year. Christmas Eve 1943, found Avignone among thousands of troops waiting to board ships in Newport News, Va. His Liberty Ship was part of the largest convoy of troops and war materials ever to disembark from the United States.

The teary-eyed, young soldiers sang “Silent Night” as they sailed. Avignone says it seemed very strange to sing carols on the holiest of days as the crowded ship full of young men headed off to war “to kill and many to be killed.”

After two weeks on the rough ocean and a brief stay in Oran, North Africa, Avignone headed on to Italy, the birthplace of his parents.

On January 27, 1944, a date that Avignone remembers well, his ship arrived in Naples. He says, “The buildings on shore were bombed pretty badly; the docks were all destroyed.” As the ship waited for boats to bring the troops to shore, hundreds of boats carrying soldiers left the harbor going north.

Avignone found out later that those boats were headed to the Anzio Beach invasion. For two days and nights, the Liberty Ship waited in the harbor. Avignone says, “It was an experience I shall long remember, my first taste of actual war.”

The Germans bombed the harbor nightly and the Allied troops retaliated. Avignone says, “I’ve never seen fireworks as those two nights.” Ships near his were hit; luckily, his was not.

Finally, the troops were brought to shore and Avignone traveled to Cerignola, were he was assigned to the 304th Bomb Wing, Headquarters Squadron. Offices and living quarters were located in two different schools in town.

The locals were friendly to the soldiers. The children pleaded, “Me hungry Joe … give me food.” Whenever he could, Avignone took extra food and medicine for them. He says, “The poor, old and children are the ones who suffered the most.”

As company clerk, Avignone’s rank was technical sergeant, and he kept records for all the personnel, including payroll for the soldiers as well as the civilians who worked for the Army.

Avignone became close friends with two men in his outfit, Joe Asteriat and Leo Fanning, both of New York. Together, the three men hung out during their free time and often attended the Capuchin Church in town. Because the soldiers were in a war zone, they were allowed to receive Holy Communion at any time during the day. They became friendly with the monks and visited and dined with them.

One of the Capuchin monks, Padre Paolino da Casacalenda, told the three soldiers about Padre Pio, who bore the five wounds of Christ. The men were fascinated and wanted to meet him. Padre Paolino offered to arrange a meeting.

Only Avignone and Asteriat were able to go on the appointed day. When they arrived in San Giovanni Rotondo, Padre Paolino, the provincial of Franciscan monasteries in Central Italy, led them into the monastery. They waited for Padre Pio in the sacristy of the church and when he entered, Avignone says, “My heart began to beat double time.” Avignone and Asteriat knelt down and kissed the palm of Padre Pio’s hand and Avignone says, “I was speechless … filled with indescribable joy.”

During the crowded, two-hour Mass, Avignone saw the suffering on Padre Pio’s face. It is said that during Mass, Padre Pio relived the passion of Christ, quivering as if he, along with Christ, were being nailed to the cross.

When Padre Pio raised his arms, Avignone saw the blood soaked wounds in the palms of his hands. Avignone says, “The only words that came to my mouth were ‘My Lord and My God.’”

Avignone and Asteriat sat on either side of Padre Pio as they dined together with the monks in the monastery. They were thrilled as Padre Pio kidded with them. Avignone says, “There are millions of people who would give anything to be in our shoes that day.”

That was the beginning of a long-lasting friendship between Padre Pio, Avignone and Asteriat, as well as Fanning, who came with them on later visits. Padre Pio called them his “spiritual sons.”

Avignone and his friends persuaded one of the monks to give them each a piece of Padre Pio’s bandage from his wounds.

The war ended and Asteriat had points to return home, while Avignone would stay in Europe and Fanning was headed to Japan. They visited Padre Pio and told him of their orders. He smiled and said they would all go home together.

When they arrived back at headquarters, they found a change in their orders. All three would return home together. Avignone says, “Our Spiritual Father, Padre Pio, was right … he probably miraculously arranged it.”

Avignone returned home to Chicago to his wife and the son he had never seen. He remained close to Asteriat and Fanning and corresponded with Padre Pio through Maria Pyle, who lived in San Giovanni Rotondo.

Avignone is retired from Sherwin Williams Co., and though his beloved wife Peggy has passed away, he still enjoys the company of his two sons and eight grandchildren. He is very active in the Pullman community and with St. Anthony Church. Avignone has been writing “Petals From Roseland” for Fra Noi for 38 years.

He spent almost two years in Italy during the war and he still has the piece of bandage from Padre Pio’s wounds. Avignone says, “He changed my life. I shall never forget Padre Pio, my friend and my spiritual father.”