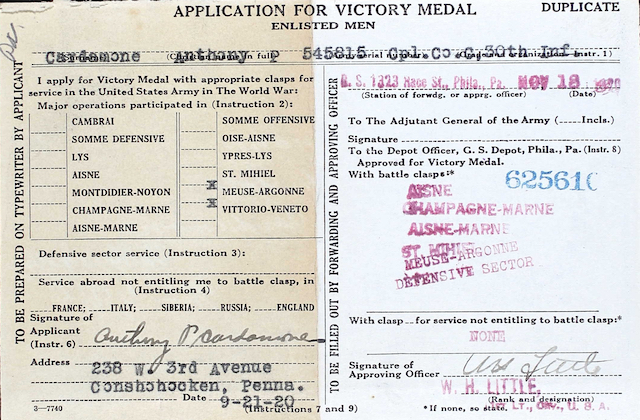 One of hundreds of thousands of Italian Americans who fought with valor during World War I, Anthony Cardamone left behind a precious legacy in the form of an account from the front.

World War I was the first American war in which large numbers of Italian immigrants served in the armed forces. Although they were certainly present in U.S. military units in previous conflicts, the timing of their heaviest immigration — the 1890s, 1900s and 1910s — ensured there would be an ample supply of young men from Italy to fill places in the burgeoning United States Army in 1917. Although it’s impossible to determine how many men and women of Italian origin served in the U.S. military during World War I, estimates of up to 300,000 are probably not a gross exaggeration. For many Italian immigrants living in America when the war broke out, serving in the military offered a fast-track to citizenship for both them and their families. It’s truly inspiring to think about how many of our ancestors risked their lives to make a better life for their loved ones in America.

With so many Italian Americans at the battlefront, it’s not surprising many of them earned medals for heroism. During the war, there were three awards soldiers could earn for acts of valor on the field of battle. The highest was the Medal of Honor, created in 1863. Next in line was the Distinguished Service Cross, created in 1918. Beneath that was the Silver Citation Star, a small device that was affixed to Victory Medal ribbons to show that the wearer had been cited for bravery in action. Upon creation of the full Silver Star medal in 1932, veterans who had received a Silver Citation Star could apply for the award in its new incarnation.

Only one Italian American earned the Medal of Honor during World War I. It was bestowed upon Michael Valente, an immigrant from Casino, for his actions while serving with the 107th Infantry Regiment, 27th Division, near Ronssoy, France, on Sept. 29, 1918. Deployed to the front lines, where his regiment was suffering heavy losses under a withering barrage of fire, Private Valente and another soldier dodged bullets as they rushed two machine gun nests, killing the gunners, capturing 21 enemy soldiers and providing the first penetration of the Hindenburg Line by Allied forces.

Dozens of men of Italian descent earned the Distinguished Service Cross during the war, but there is no way to know how many earned the Silver Citation Star. We are fortunate to have a first-hand account of one such soldier. 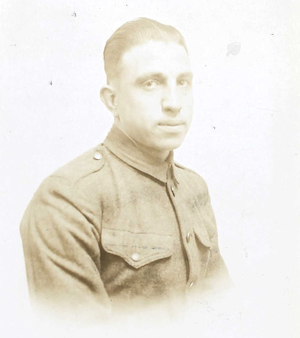 Anthony Philip Cardamone was born on Feb. 12, 1895, in Soveria Manelli, Catanzaro, Calabria. He came to the United States with his family in 1898 and settled in Conshohocken, Pennsylvania. He was a trimmer’s helper in an iron mill when he was inducted into the Army on Nov. 2, 1917. Assigned initially to a machine gun unit, Cardamone was soon transferred to Company C, 30th Infantry Regiment, 3rd Division, as an automatic rifleman. He shipped to France in April 1918 and soon saw heavy combat with one of the hard-fighting regular Army regiments that racked up an impressive record during the war. Cardamone served in the Aisne, Aisne-Marne, Champagne-Marne, St. Mihiel and Meuse-Argonne offensives, suffering a shrapnel wound in his side on Oct. 14, 1918.

After the war, Cardamone was cited for gallantry in action, probably for what he did south of the Marne River on July 15, 1918. In a letter to his father, dated Nov. 28, 1918, Cardamone described his role in the battle:

“[O]n the night of July 15th [1918], we held a position on the railroad running along the [Marne] river. I was an automatic gunner, and Pettive [sic, an error in the transcription; Private Antonio Pettine, a fellow Italian from Conshohocken] was my helper and loader, and we defended a little hill along the railroad. Around 1 o’clock the Germans began their bombardment, and it sure was hell on earth, you can never imagine what it is to be under a barrage from the Germans. We were in a little hole, and Pettive [sic] and I expected to die every minute. The shells were landing all around us. To give you an idea of what a barrage is, I will tell you that it is like as if somebody was throwing steel and iron at you. A shell when it bursts breaks into a hundred pieces and if one of those pieces hits you, it will tear you to pieces, it is a million times worse than a bullet. When a shell bursts, it breaks into shrapnel, and it looks like scrap iron. Just imagine being hit with a piece of steel scrap, only with such deadly force.

“Well, thank God, we laid low in our little hole, and we survived that barrage; it lasted from 1 o’clock until 4, and those three hours were anxious hours. It was now beginning to be daylight, and we expected the thing to stop, but when the fog from the river had lifted; oh, what a sight was before our eyes, the Germans had crossed the river Marne, and had broken through our right flank, and had us surrounded. We had Germans in front of us, Germans in back of us, and Germans on our flanks. We were surrounded, and we felt like goners. We then decided to break our way through; it was either life or death, so we formed a line, and at the command we all fixed bayonets and charged the Germans in the rear. We did it so good, that we surprised the enemy, and we broke through capturing 135 Germans into the bargain. It was only about 25 of us so you see we did good in getting 135 Fritzs. It was here that Volpe [Corporal Alfred Volpe, a fellow Italian immigrant from Conshohocken, who was reported killed in action on July 15, 1918, but was actually captured; he was released after the war] was killed, and Sassi [Sergeant Damiano Sassi, a fellow Italian immigrant from Conshohocken and a member of the same company as Cardamone] wounded. I helped Sassi to the rear, and two days later we were reorganized. I was made corporal, and in charge of all six automatic men [sic].”

Cardamone saw still more combat before he was wounded during the Meuse-Argonne offensive, as he reported to his father: “At last, on Monday, Oct. 14, at 3:30 p.m. Fritz hit me in the side, and put me out of the war.” After spending many weeks in the hospital, Cardamone returned home to Pennsylvania and found work in the steel industry. In 1923, he married Anna Patitucci, and the couple had two sons, one of whom died in infancy. Cardamone passed away in July 1972 and is buried in his American hometown of Conshohocken. Anthony Cardamone is just one example of the thousands of Italian Americans who were cited for gallantry in action during World War I. We are indeed fortunate to be able to read his own description of his actions on the field of battle.