The Latest From the Museum 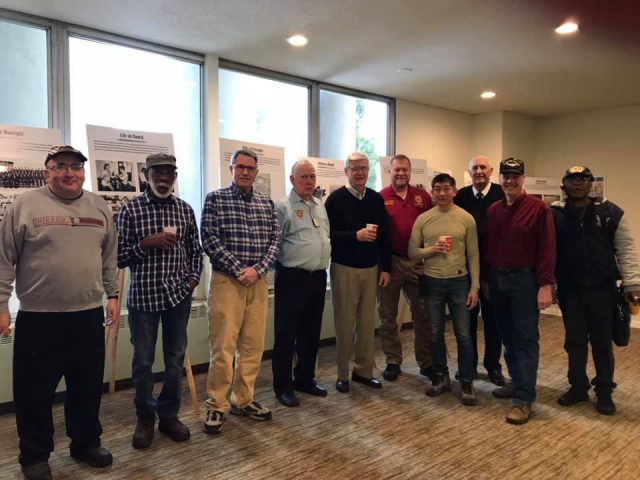 The American Legion First Division, Department of Illinois, held its Commander’s Breakfast at the Italian American Veterans Museum on Feb. 8. On hand to open the museum and welcome the august assemblage was IAVM board member and American Legion Post 335 Commander Lorenzo Fiorentino. First Division Commander Gigi Callaway hosted the meeting, which included Illinois Senior Vice Commander Wayne L. Fischer and Department of Illinois Membership Director Chad Woodburn, as well as several of the Division’s District Commanders and Staff. The Division donated $100 to thank the museum for the use of the space, and collected another $100 in donations by passing the hat. Three other meetings scheduled at the museum by veterans groups had to be postponed after the shelter-in-place order was issued. Once the order is lifted, we invite any chartered, non-profit veterans organization to hold their next meeting at our museum so long as no admission fee is charged. 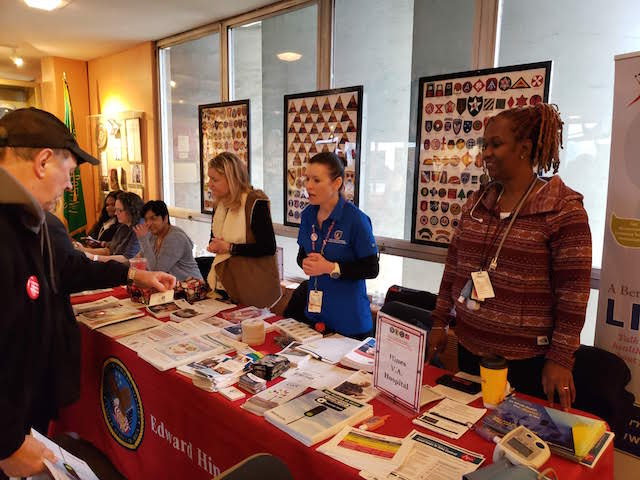 More than 40 veterans and 30 representatives from nearly 20 government agencies, non-profits and businesses braved threats of a winter storm to attend the Italian American Veterans Museum’s first-ever Veterans Resource Fair on Jan. 11. The event was co-hosted by the Cook County Clerk’s Office.

The entire third floor of the Casa Italia office building was bustling with activity from 10 a.m. to 2 p.m. as veterans gathered information on an array of services, including ID and discount cards, utility bill assistance, free dental care and legal services, comfort K9s, culinary classes, veterans-only chess tournaments and work as Census takers and election judges.

Recently elected IAVM President Renato Bacci and Cook County Clerk Karen Yarbrough were on hand along with a host of dignitaries from the local, county and state to greet the veterans. Many attendees were first-time visitors and all shared positive comments about the event and the museum. 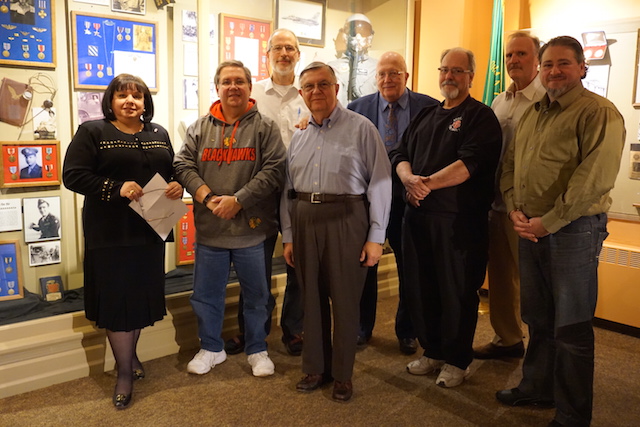 A changing of the guard at the Veterans Museum

The January meeting of the board of directors was a momentous occasion, with museum President Paul Basile and his fellow civilian officers making room for a whole new cadre of leaders with extensive military background. Basile passed the gavel to retired Army Col. Renato Bacci. Joining him at the top are retired Navy Com. Joseph Troiani (first vice president), retired Army Major Lorenzo Fiorentino (second vice president) and Army veteran Mark DiSanto (third vice president). Filling out the ranks are curator Steve Corbo as treasurer, Basile as secretary and Eugene Giudice as parliamentarian. Basile will also serve as executive vice president, continuing his organizational role behind the scenes. The new officers were sworn in by longtime community leader Joanne Spata.

For profiles of all our board members, click here. 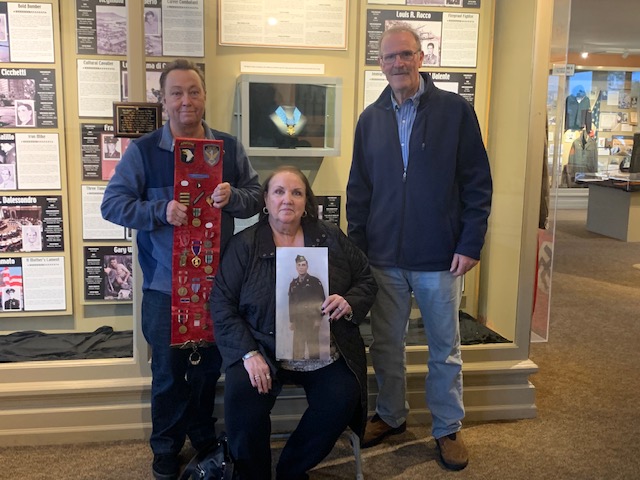 Rose Mary and Chuck Kurgis journeyed to the museum from south suburban Crete to donate a remarkable trove of memorabilia from Rose Mary’s father, departed World War II hero Louis Venditti. Venditti was a member of the legendary “Band of Brothers,” parachuting behind enemy lines in the predawn hours of the D-Day invasion. He earned the Bronze Star, the Purple Heart for wounds received in action, the Belgian Croix de Guerre and the French Legion of Honor. He can be seen in one of the most iconic photos of the war, taken after the liberation of the French town of Saint-Marcouf following two days of fierce fighting. Among the memorabilia donated by the Kurgis family were a rare Belgium high-power 9 mm pistol, clickers used by the paratroopers to identify each other during night combat, and all of Venditti’s military decorations. Pictured above are the couple presenting a photo of Venditti along with his military decorations to museum Curator Steve Corbo. 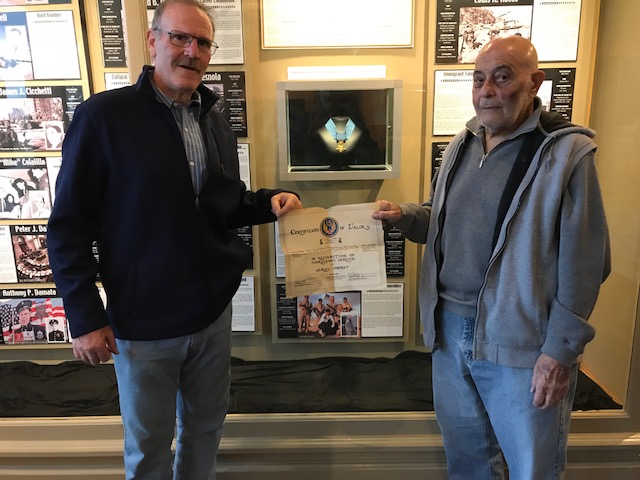 The Italian American Veterans Museum was honored to accept a donation of memorabilia belonging to departed World War II hero Raymond Ciccone from his nephew, Vietnam veteran Frank Falzone. A staff sergeant in the Army Air Corps, Ciccone was an aerial gunner on a B-24 Liberator heavy bomber. Stationed in Italy and flying with the 455th Bomb Group (Heavy), he flew 35 combat missions over enemy territory, earning four Air Medals for his bravery. Falzone is pictured presenting museum Curator Steve Corbo with his uncle’s Certificate of Valor “In Recognition of Courageous Service in Aerial Combat.” 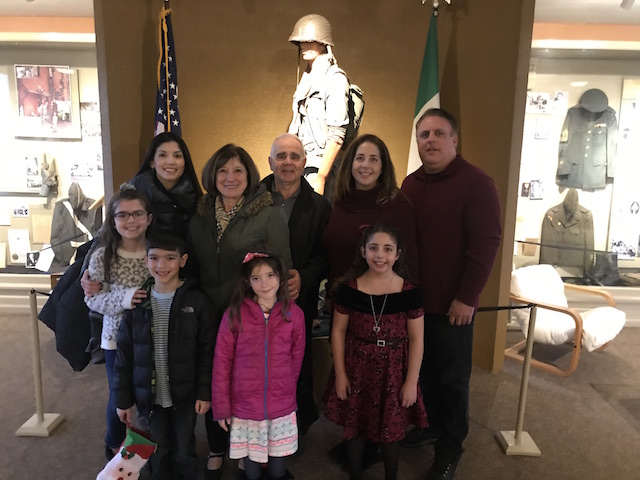 Families pause to honor our veterans during the holidays

Hundreds of children turned out with their parents and grandparents in tow for Casa Italia’s Christmas Village, a beloved annual event that features a Mass with Living Nativity, visits with Santa and La Befana, horse-drawn cart rides and traditional Italian treats. More than two dozen attendees stopped by the veterans museum while they were on the grounds. Among them were Frank and Angela Cassata; their daughter AnnaStella Grana and her children Isabella, Jack and Angela (left); and family friends Anna and Dave Olson and their daughter, Daniela (right). “It was wonderful to see and read about our military history,” AnnaStella wrote afterward. “As children of immigrants, one thing my parents always taught us was how lucky they were to have come to America and to be thankful and proud to be an American Italian.”

For more words of praise for the museum, click here. 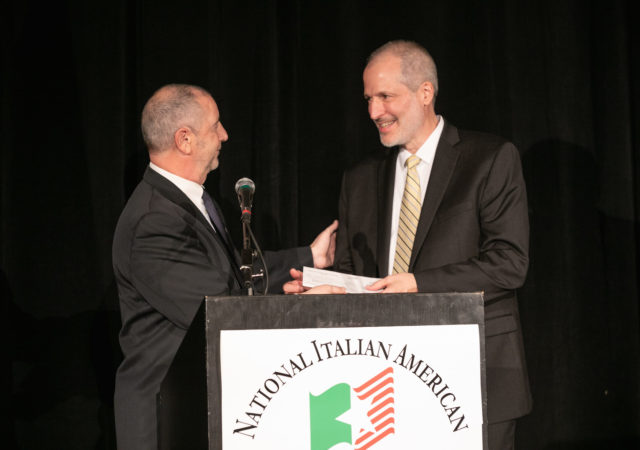 Museum President Paul Basile couldn’t believe his ears. National Italian American Sports Hall of Fame Executive Board Member and Legal Counsel Enrico Mirabelli was calling to inform him that the sports hall would be donating $5,000 to the museum! The remarkably generous bequest was given in memory of founder George Randazzo’s military service. Paul gathered intel from museum curator Steve Corbo, a longtime friend of Randazzo, sharing the following with the audience at the NIASHF’s Nov. 9 gala. “You may not know this, but George served in the First Air Cav during Vietnam. No division of the Army suffered more casualties during the war than that division,” Paul said from the podium. “He earned a Purple Heart for wounds sustained during combat, and he fought at La Drang, one of the bloodiest and most decisive battles of the war. It is truly an honor to accept this donation in that memory.” 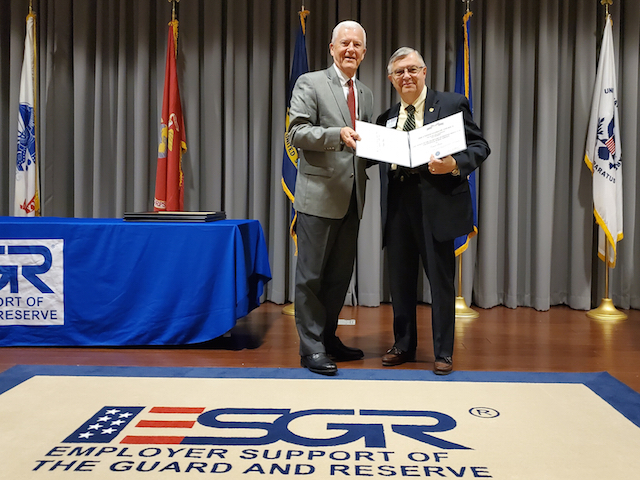 Colonel Renato Bacci, U.S. Army (Retired), was awarded the Office of the Secretary of Defense Medal for Exceptional Public Service in a ceremony at the Pentagon Office Complex in Washington D.C. on Nov. 15. He was recognized for his service as state chair of the Illinois Committee for Employer Support of the Guard and Reserve from October 2013 to September 2019. The award was presented by ESGR Chairman Ronald E. Bogle (on the left in the photo). A museum board member, Bacci was hailed for his exceptional leadership, dedication and commitment to the mission of the Illinois Committee and for significantly enhancing and sustaining employer support for the men and women serving in the United States Armed Forces Guard and Reserve. 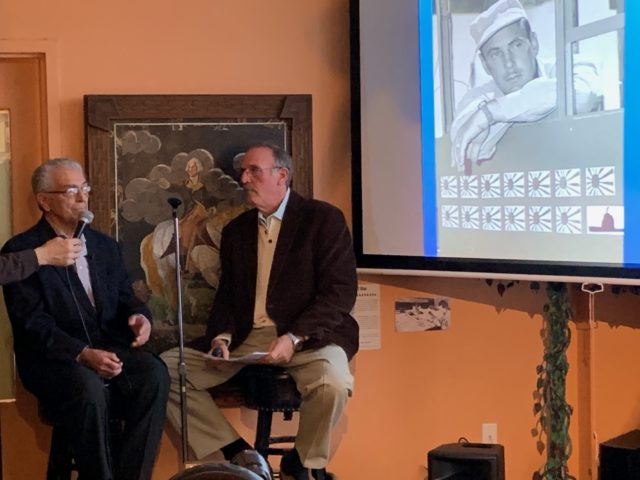 A near-capacity crowd turned out on Nov. 10 to hear Ralph Triggiano share his wartime experiences as a recon photographer for the Navy during World War II. Museum curator Steve Corbo did a splendid job of setting the stage, leading Ralph in an hour-long conversation that covered topics ranging from military might and the hazards of war, to life on board and on shore, and Nagasaki from the air and on the ground after the atomic blast. “This really helped me,” Ralph shared during a quiet moment after the event. His photographs will be on display at the museum through the end of the March. Please visit us between 1 and 4 any Saturday.

To view a video of the presentation, click here. 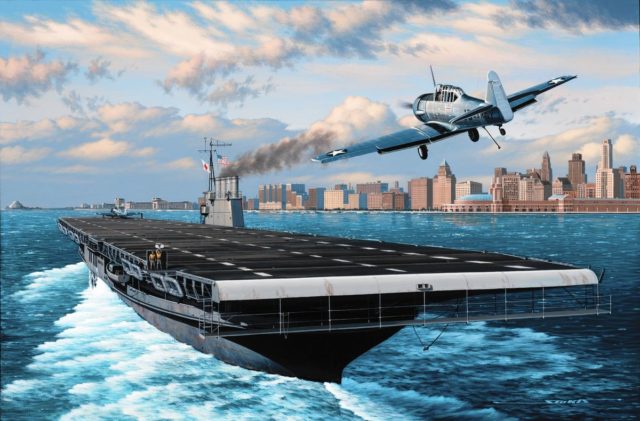 Troiani tells untold tale of warfare on the lakefront 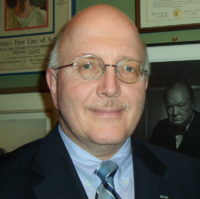 It was all hands on deck when board member Joe Troiani presented an acclaimed PBS documentary at the museum on Dec. 7. “Heroes on Deck: World War II on Lake Michigan” tells the untold tale of a program that trained more than 15,000 carrier pilots off the shores of the Windy City during World War II. The training took place on a pair of coal-fired, side-wheel passenger steamers transformed into “flattops,” with scores of trainees overshooting their mark and sending their planes to the bottom of the lake. The documentary charts the recent recovery of those rare war birds and the ingenious training program that changed the course of the war in the Pacific. A retired Navy commander, Troiani set the stage for the screening with a lively AV presentation that touched on the program and tracked the success of these brave pilots after their training was complete. 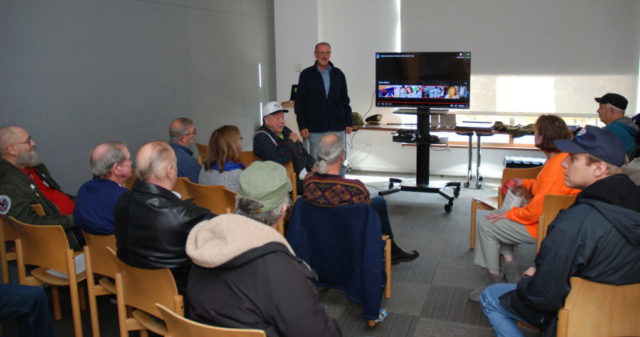 Museum curator Steve Corbo was the featured speaker at the quarterly meeting of the Veterans For Unification, held on Nov. 2 at the Oak Park Public Library. After a rousing round of “Taps” by Tom Day, founder of Bugles Across America, Steve addressed the group about the museum’s history, mission and exhibits. In addition to viewing a three-minute video tour of the museum, the audience was treated to the museum’s new traveling exhibit, assembled by Steve. On display were military artifacts such as helmets, uniforms, medals and patches representing all branches of the service, covering World War II to the present. The exhibit even included a highly prized World War II samurai sword! 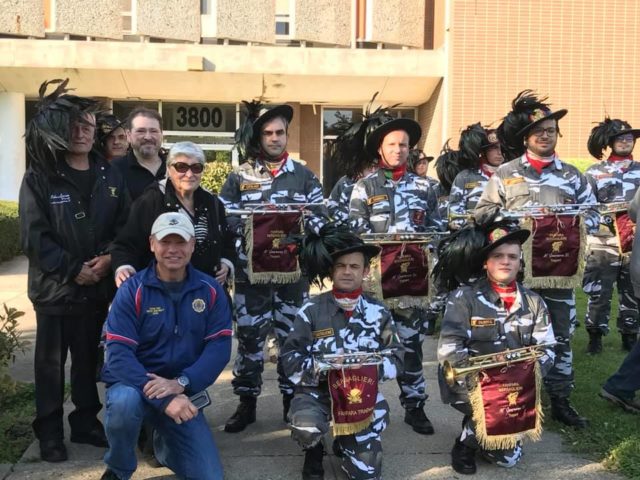 Board member Lorenzo Fiorentino gave a private tour of the Italian American Veterans Museum to members of the Fanfara dei Bersaglieri while they were in town for the Columbus Day Parade. The Fanfara dei Bersaglieri is an elite Italian military band known for its plumed hats and tradition of running in formation while performing. Fiorentino was honored by the Bersaglieri for combat operations that he conducted with them while he was deployed to Afghanistan. 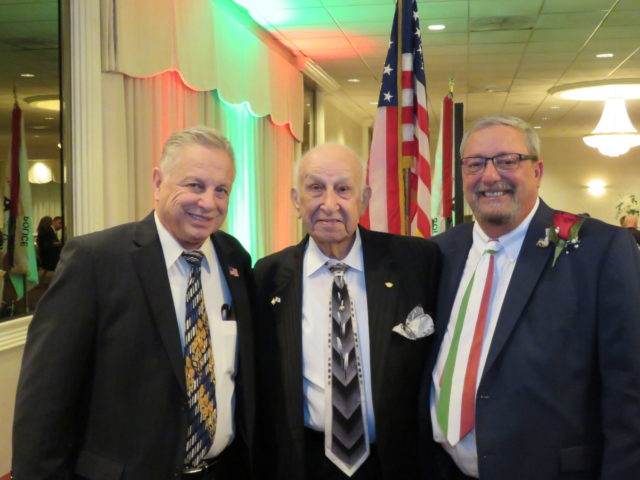 IAVM board member Carl Liture was in good company on Oct. 26 as one of four honorees at the Italian American Police Association’s annual gala. He shared the stage with Chicago Alderman Nick Sposato, Illinois State Police District Commander Jason LoCoco and Circuit Court Judge William Raines. A Navy veteran of World War II who witnessed the official surrender of the Empire of Japan, Liture served as a Chicago Police Officer for 30 years. Carl is pictured between IAPA President Tony Langone and immediate past president and IAVM board member Phil Tenerelli 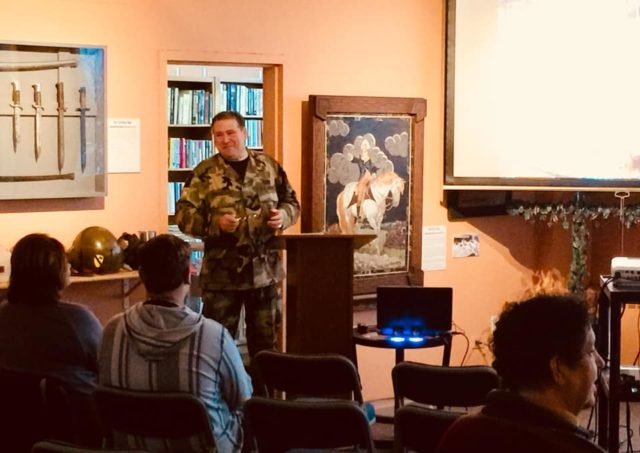 Fiorentino tells a tale of dreams deferred in war-torn Afghanistan

While Army Major Lorenzo Fiorentino was stationed in Kabul, Afghanistan, from March 2004 to March 2005, he noticed that the Afghan people could make just about anything. Within weeks, he organized a bazaar at his military base where local vendors could sell their wares, stimulating the economy and giving the soldiers an opportunity to buy gifts to mail home to loved ones. One day, one of his soldiers introduced him to a widow who pitched him on the idea of organizing fellow Afghan women to create and sell dolls representing the various tribes of Afghanistan. A museum board member, Fiorentino offered a stirring account of the initial success and ultimate demise of his economic development efforts at an April 27, 2019, AV presentation at the museum. On display during the event were artifacts from and maps of Afghanistan along with a colorful array of dolls.