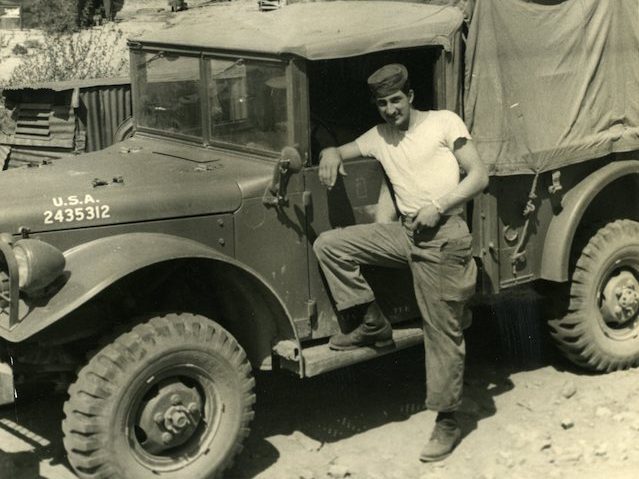 A member of a Combat Engineer Battalion during the Korean War,  Ralph Imbrogno spent plenty of time in harms way while maintaining and building roads and keeping the front line supplied.

Ralph Imbrogno was born in Chicago and lived in the Near West Side neighborhood of Laflin and Lexington. He graduated from Crane Tech High School and was drafted into the Army in December 1952.

Imbrogno completed basic training at Ft. Leonard Wood, Missouri, and traveled to the West Coast, where he boarded a ship, destination unknown. Also on the ship was his buddy, Joe, who lived one block away. They were drafted together, trained together and spent their military service together.

Imbrogno boarded another ship to Inch’on, Korea, and arrived in April 1953. As a train took him further into the country, Imbrogno remembered looking out the windows to see convoys of trucks and artillery on the roads. In the distance, the Korean sky was lit up and he heard heavy bombing. “I knew I was in for no picnic,” Cpl. Imbrogno recalls. The next thing he knew, he was up in the line and “that was the start of all hell breaking loose.”

As part of the combat engineer group, Imbrogno’s jobs were many. He and his platoon maintained existing roads to keep them in good condition, and built new roads when necessary, as well as culverts for drainage.

A very important part of his job was supplying the troops on the front line. The 32nd Infantry Regiment secured the 38th Parallel, known as the Main Line of Resistance, or MLR. Imbrogno and his platoon delivered food, ammo and other supplies to the infantry. 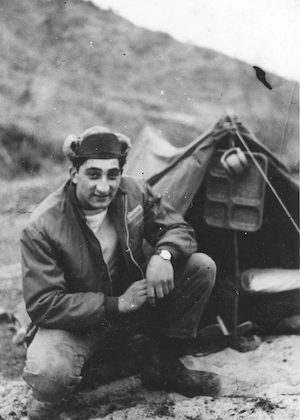 Imbrogno’s camp, which he shared with around 200 men, was about 15 miles from the MLR. Trips to the front line were made daily, alternating between day and night with the two other platoons. Once a delivery was made, the soldiers stayed eight to 10 hours, securing what they had to and keeping trenches and bunkers clear for the infantry. Then the men returned to camp.

Conditions at the camp were not good. Imbrogno slept in a pup tent and ate only K rations and C rations, no hot meals. Imbrogno remembers, “The weather was treacherous.” Winter temperatures were brutal, dipping to 25 below zero. He suffered from frostbite on his feet. Summers were “horrible,” with the unbearable heat. Mosquitoes were more than a nuisance. “They would knock you off the cot, they were so big,” Imbrogno says.

The monsoon season brought continuous rain, day and night. Imbrogno remembered living for a month with his poncho on. He had to eat and do everything under the poncho. His feet were never dry. His work did not stop because of the rain. Deliveries to the MLR continued and, worst of all, the roads were continually washed away. The soldiers of the combat engineers were fighting a losing battle trying to keep the roads open for the troops and artillery.

The fighting went on despite the weather. Imbrogno was under enemy fire while going to the MLR with ammo and food and also when he was there, maintaining the trenches. The enemy lobbed mortars at them while they repaired the roads. He was lucky, but members of his platoon were wounded. “It was bad; it was bad!” he says.

The mortar attacks did not stop at nightfall. The Chinese used special scopes to light up the area, enabling them to see the Americans. “I did a lot of praying,” Imbrogno says.

He was only 20 years old when he saw a fellow soldier with his stomach blown wide open. Imbrogno shakes his head as he remembers and says, “It scared the daylights out of me.”

The Bouncing Betty, a land mine, mortally wounded many soldiers. When the wire was tripped, it launched into the air at about waist height and exploded, propelling shrapnel horizontally at lethal speeds.

While working on the roads, Imbrogno went through villages like Uijongbu. He was told not to trust anyone in the towns because you never knew who they were or what they might do.

Imbrogno watched from the front line as the Chinese troops marched into battle; bugles blaring. The first wave of soldiers had rifles and as they fell to the ground, the second wave came in, picked up the guns, climbed over their fallen comrades and tried to come up the hill. “There were so many of them; they were like ants,” Imbrogno says.

Guard duty was part of every soldier’s job, and Imbrogno remembered it vividly. He was awakened and told by his officer, “Whatever you do, don’t fall asleep … you’ll waste the whole camp.” He knew the enemy was out there and he imagined all kinds of things in the darkness of the night. He was petrified and did everything in his power to stay awake and keep alert. The noise of the big guns was constant. “It scared the heck out of you,” he says.

Imbrogno spent one week of Rest and Relaxation in Tokyo. “What a blessing that was to get over there,” he says. While in Japan, he saw the destruction wrought of the nuclear bombs from World War II. “It looked like twisted pretzels,” he says.

Imbrogno returned to the States in October 1954, was discharged and returned to Chicago. Military decorations include a Korea Service Ribbon and a Bronze Service Star.

Imbrogno and his wife, Angie, are actively involved with their family, which includes seven grandchildren. Imbrogno is past state commander of the Italian American War Veterans as well as past commander for Post #2.

Imbrogno reflects on his time in Korea and says, “When I first got there, I was scared to death. When I left, I was relieved. … It was a living hell!”