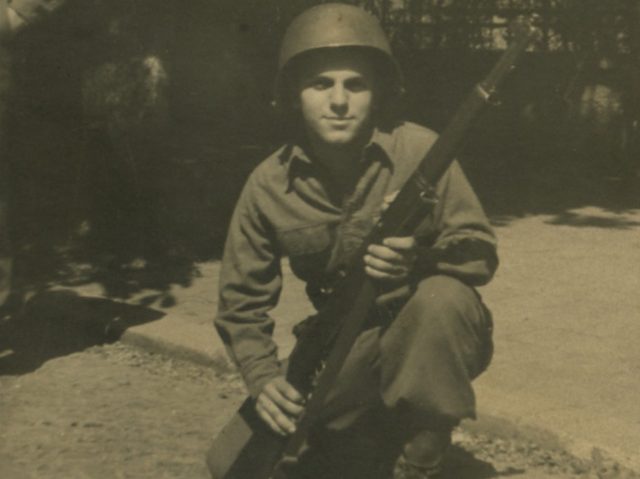 “My religion kept me going,” Bruno Perino says of the non-stop combat he experienced during World War II. “Every night in the foxhole I said the Act of Contrition, blessed myself with the Sign of the Cross, and thought, ‘If I’m going, that’s it.’”

Bruno Perino was born in Chicago and grew up in the Chinatown neighborhood. He was 16 when Pearl Harbor was bombed and his older brother, Joe, was drafted into the Army. Two years later, it was Perino’s turn.

He completed 17 weeks of training in Florida and shipped out to Oran, Africa. Enemy bombing was so heavy in Oran that the troop ship continued on to Naples, where Perino trained at the replacement depot. He was assigned to the 45th Division as an infantry rifleman.

Perino saw his first combat when, amidst heavy shelling, he landed on the beaches of Marseilles on D-Day plus six, June 12, 1944. He and his comrades were caught in the crossfire between the enemy on the beach and the Allied battleships. “The noise was horrific!” Perino says. “Lots of guys threw up. They were crying … praying.”

The troops advanced inland and, at nightfall, the soldiers were ordered to “dig in.” Perino’s foxhole buddy was a sergeant on his third amphibious invasion. He sat, shaking, in the hole. Perino asked him, “What’s wrong?” He replied, “I just can’t take it anymore!” The sergeant propped his rifle under his chin and a worried Perino ran for the captain. The sergeant, a victim of combat fatigue, was taken to the hospital. “He scared the daylights out of me,” Perino remembers.

From the south of France to the Vosges Mountains, Yugoslavia, Belgium and Germany, Perino fought battle after battle. He remembers sitting in a foxhole, praying, while the Germans blasted away at them for six hours. Marching through open countryside, forests and cities, rifleman Perino was always out in front, often the first scout “at the point.” Occasionally, he rode on a tank. “You don’t know what you’re going to run into in the towns,” he says.

Perino was leading his squad of 10 men on patrol when he heard his foxhole buddy yell out, “Perino, I tripped the wire!” His buddy fell right on the land mine and was blown three feet into the air, mortally wounded. The blast threw Perino to the ground; he was shaken but not injured.

His new foxhole buddy was an Italian guy from the Air Force with only two weeks of infantry training. Leading the patrol in the mountains, Perino told him, “As soon as you get across the road, hit the dirt.” Perino crossed, hit the ground and heard shots. A squad member came from behind and told him, “Joe got shot.”

Perino chokes up with emotion as he recalled the many officers and enlisted men who lost their lives in the war. Some were killed in their first days of combat. Perino recalls thinking, “Who’s going to die next?”

Every night, when Perino went to sleep, he thought, “Well, I made it to tonight, now will I be awake tomorrow morning?” And when he awoke the next day, he would think, “Now will I see tonight?”

“That’s the way we lived,” Perino matter-of-factly says. “Cold, hot, snow, rain, out in the wilderness for two years.”

Perino’s squad was spread out as he led them on patrol up a winding mountain road in Alsace-Lorraine. He spotted a light shining from under the door of a small building and immediately advances. Perino opened the door, and much to his surprise, found 12 German soldiers standing at the bar. He jabbed his rifle into the back of the first soldier, who happened to be a lieutenant, and said in German, “Hands Up! The war’s over for you. You’re going on the ship back to America.”

The German officer replied, “You’re a brave soldier,” took off his gun belt and handed it over to Perino along with his Luger, dagger and .25 automatic. The other Germans soldiers threw their rifles down and Perino marched them out single handedly, all the time wondering where his men were. He thought they were right behind him.

The squad met up just outside the tavern. Some had passed the building and others were just coming up. One of his buddies said, “Who the hell you think you are, Sgt. York?”

“To this day, I don’t believe what happened,” Perino says. “The Blessed Mother or some saint was watching over me that night.”

The fighting was fierce through Alsace and Germany, and after marching all night, Perino and his men arrived at the Siegfried Line about 3 in the morning. The Germans turned their searchlights on them and opened fire. “This I’ll never forget,” he says. “They wiped out about half the battalion.”

He woke up in the field hospital with a concussion, and who did he see watching over him but his brother, Joe, a medic, who he had not seen in over two years. They savored a brief reunion while Perino recovered in Joe’s barracks for a few days before returning to battle.

He joined up with Patton’s men and pressed onward. Meeting resistance in the town of Aschaffenberg, the ground troops called for air support and, according to Perino, “The P51s were strafing the hell out of it.” The bombing continued for five hours, and then the ground troops went in for building-to-building fighting. “Your adrenalin kicks in and that’s it … they train you to kill or be killed,” he recalls. “The colonel (in charge of the German troops) was a fanatic; he finally surrendered.”

Perino participated in the liberation of the Dachau concentration camp. He remembered riding in on tanks. The sight of the camp is something he will never forget. The stench was horrible. Bodies were stacked like cordwood. He opened boxcars and discovered bodies piled high. Perino said, “We couldn’t believe it!” The grateful, emaciated prisoners bowed and kissed the feet of the American soldiers. He said, “Their eyes were sunken … it was like skeletons talking to you.”

The orders were to take the Nazi officers as prisoners, but the crimes the American soldiers witnessed were so heinous that they killed them on the spot.

When the war ended, Perino stayed on in Munich as part of the occupation force. He was in the States, ready to head to Japan, when the atomic bomb was dropped. “We could not believe that one bomb could destroy a city,” Perino says. “We were happy that the war was over; all hell broke loose.”

He returned home to Chicago, where he was honorably discharged with a chestful of decorations that included three Bronze Stars.

Recalling his many battles, Perino says, “My religion kept me going. Every night in the foxhole I said the Act of Contrition, blessed myself with the Sign of the Cross, and thought, ‘If I’m going, that’s it.’”