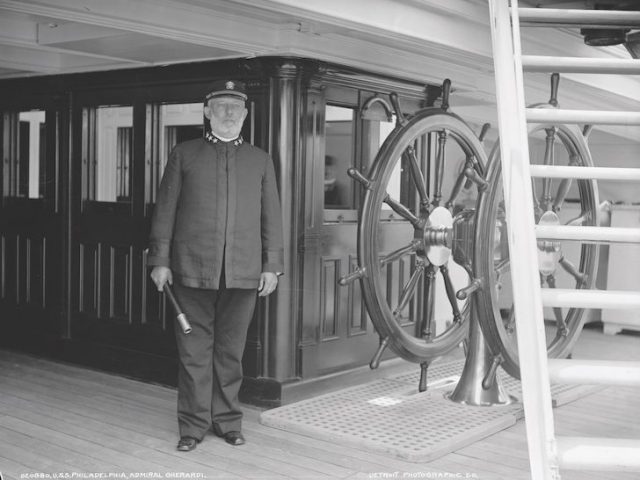 The most prominent Italian-American naval officer of the 19th century, Bancroft Gherardi distinguished himself in both war and peace.

During the American Civil War, several officers of Italian descent served in the Union Navy. The highest-ranking among them was Bancroft Gherardi, a versatile officer and distinguished leader in the modern American Navy.

Gherardi’s father, Donato, migrated to the United States from Tuscany in the 1820s. He settled in the Boston area and in 1825 married Jane Bancroft, the daughter of Secretary of the Navy George Bancroft. Several years later, Donato moved his growing family to Louisiana so he could take a teaching position. Bancroft Gherardi was born there on Nov. 10, 1832.

In 1846, Gherardi received an appointment to the United States Naval Academy in Annapolis, Maryland, at the tender age of 13. He graduated in 1852, ranking 14th in his class. Following graduation, Passed Midshipman Gherardi served aboard vessels in the Mediterranean, Atlantic and Pacific. When war broke out in 1861, Lt. Gherardi was stationed off the coast of Southern California and tasked with protecting gold-laden Union vessels from rebel commerce raiders. In November 1861, Gherardi became executive officer of the gunboat Chippewa in the North Atlantic Blockading Squadron. Between December 1861 and August 1862, the ship served on the blockade off the coasts of Virginia and North Carolina. During that period, the Chippewa took part in the capture of a Confederate blockade runner, and Gherardi participated in his first combat action when ships of the North Atlantic Squadron bombarded Confederate-held Fort Macon in North Carolina. The fort surrendered to a combined Army-Navy force in late April. 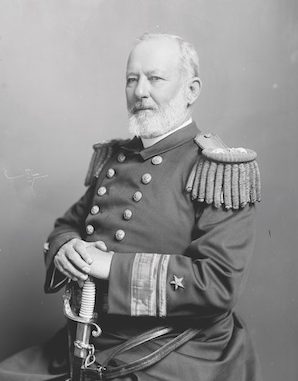 In July 1862, the 29-year-old Gherardi was promoted to commander. Shortly thereafter, the Chippewa went on a cruise in search of the Confederate commerce raider Florida that took it to the Azores, Europe, Africa and the West Indies. The Union vessel also took part in a futile attempt to capture the Confederate blockade-runner Gibraltar, known formerly as the commerce raider Sumter. Captained by the legendary Raphael Semmes, the Sumter had taken or destroyed 18 northern merchant ships in 1861 before being forced into port at Gibraltar in January 1862. Eventually resold to the Confederacy at auction in December of that year, the vessel was renamed the Gibraltar and used as a blockade runner from 1863-64.

The rebel ship remained a concern for all U.S. commercial vessels. The commander of the Chippewa received orders to “destroy the Sumter whenever he had an opportunity to do so out of neutral jurisdiction.” According to one account, the Chippewa was “watchful as a lynx cruising at the entrance of [Gibraltar] bay, and never losing sight of the [enemy vessel].” Unfortunately, the Gibraltar covertly left port during a gale in February 1863 and sailed into the Atlantic. The Chippewa remained in European waters until it was transferred in April 1863 to Admiral Samuel DuPont’s South Atlantic Blockading Squadron off the coast of Port Royal, South Carolina.

Gherardi soon left the Atlantic for the Texas Gulf Coast and command of his own ship, the steam gunboat Chocura. The young officer captured several blockade-runners during his six-month stint in Texas waters, including the schooner Fredric the Second, which the Chocura seized while towing another prize, the British schooner Agnes. Gherardi’s efficiency caught the attention of his superiors and proved lucrative for both him and his men. As prescribed by maritime law at the time, the commander and crew were entitled to a percentage of any contraband found aboard ships attempting to penetrate the blockade.

In May 1864, Gherardi was transferred to the waters off Mobile, Alabama, and given command of a new gunboat, the Port Royal. Fame soon followed. In the summer of 1864, Union Admiral David Glasgow Farragut was poised to attack the Confederate forts defending Mobile Bay, the last major Confederate stronghold on the Gulf Coast. Farragut’s fleet would have to contend with the guns of forts Morgan and Gaines (which commanded the entrance to the bay), more than 100 underwater mines, the Confederate ironclad Tennessee and her escort ships. 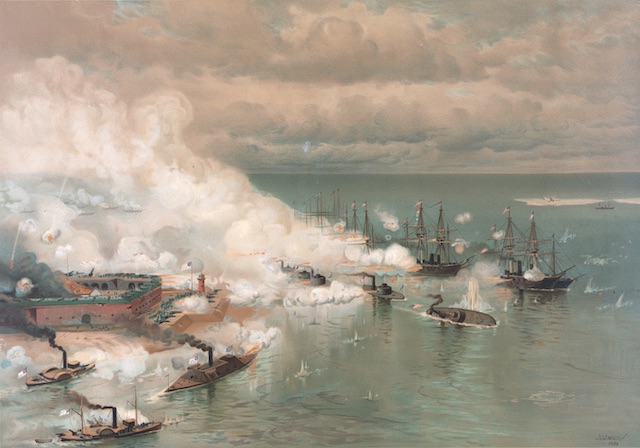 On Aug. 5, Farragut assembled four ironclad monitors and 14 wooden frigates and headed for the entrance to Mobile Bay. To protect themselves from the murderous fire of the southern forts, the wooden Union ships were paired and tied together. Gherardi’s ship, the Port Royal, and its companion frigate, the Richmond, were third in line of the wooden warships, immediately behind Farragut’s flagship, the Hartford. The monitor Tecumseh led the Union fleet toward Fort Morgan, but it hit a submerged mine and sank almost immediately, killing 113 of 135 crewmembers. Urged on by Farragut’s legendary words, “Damn the torpedoes, full speed ahead,” the Union flotilla sailed past Fort Morgan’s heavy guns and the rebel minefield at the bay’s entrance. Farragut’s ships then encountered the Tennessee. Admiral Franklin Buchanan, commander of the Confederate ironclad, had left the safety of the fort’s guns to confront the Yankee ships. During a three-hour engagement, Farragut’s vessels rammed the Tennessee several times and eventually bombarded it into submission. The loss of the Tennessee and the passage of the Union fleet into the bay led to the surrender of Fort Gaines on Aug. 8 and Fort Morgan two weeks later.

Gherardi and the crew of the Port Royal played a significant role in one of the most pivotal naval battles of the war. As the ship made its way into the bay, the Port Royal trained its 10-inch pivot gun on Fort Morgan and its rifled cannon on Fort Gaines. Gherardi’s ship also blasted the Tennessee as it “passed down the [Union] line.” Finally, the Port Royal was cut loose from the Richmond and gave chase to the Tennessee’s three escorts. In his official report of the battle, the captain of the Richmond praised Gherardi “for his cool and courageous conduct, from the moment the attack commenced to the time his vessel was cast off by my order to go in chase of the enemy’s three wooden gunboats.” In a dispatch to Secretary of the Navy Gideon Welles, Admiral Farragut also commended Gherardi for his actions. The battle of Mobile Bay gave the Union effective control of the entire Gulf of Mexico. Coupled with William Tecumseh Sherman’s capture of Atlanta, it helped stifle peace rumblings in the North and ensure Lincoln’s reelection.

Gherardi remained in the Navy for nearly 30 years after the end of the Civil War, eventually rising to the rank of rear admiral. Over the decades, he helmed the Brooklyn Navy Yard and the North Atlantic Squadron, led a diplomatic mission to Haiti, and commanded a squadron dispatched to South America to prevent war between the U.S. and Chile. A highlight of Admiral Gherardi’s post-Civil War career occurred in April 1893 when he was appointed to lead the Hampton Roads Naval Rendezvous. This grand armada of 38 warships from 10 nations was the first of many activities leading to the opening of the Chicago Exposition.

Gherardi retired from the U.S. Navy in 1894 after 48 years of service. The most prominent Italian-American naval officer of the 19th century died in his Stratford, Connecticut, home on Dec. 10, 1903, and was buried in Annapolis on the Naval Academy grounds.

This article was co-authored by Dr. David Coles.

Dr. Frank Alduino earned his doctorate from Florida State University. His book, “The Sons of Garibaldi, Italian Americans in Blue and Gray,” co-authored by Dr. David Coles, was published by Cambria Press in 2007. Alduino was named Professor of the Year by the Student Association at Anne Arundel Community College in 2006 and was selected as the keynote speaker for the 200th anniversary of Giuseppe Garibaldi's birthday celebrations at the Garibaldi-Meucci Museum on Staten Island. Dr. Alduino was also a Scholar in Residence at the Casa Italia in Chicago in 2011 and is an adjunct at Towson University. Dr. David Coles is professor of history and former chair of the Department of History, Political Science, and Philosophy at Longwood University in Farmville Virginia, where he teaches a variety of classes on American history, including the Civil War and Reconstruction. He received his Ph.D. from Florida State University and previously worked as a supervisor at the Florida State Archives in Tallahassee. Dr. Coles has authored or co-authored a number of articles and books, and is the co-author with Dr. Frank Alduino of "Sons of Garibaldi in Blue and Gray: Italians in the American Civil War. "