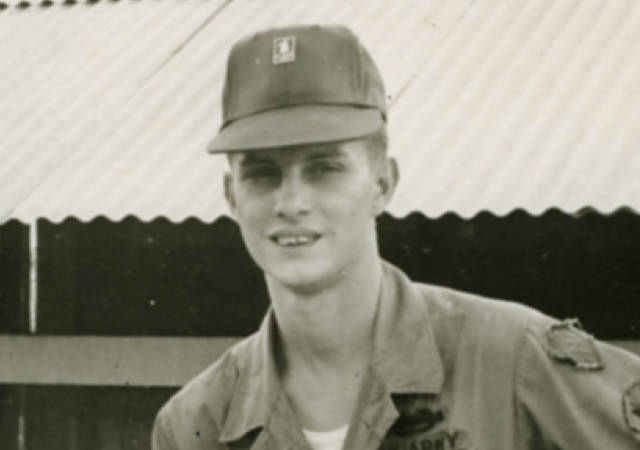 A member of an Army regiment known as the Wolfhounds in Vietnam, Anthony Langone spent 30 days under siege in the jungle during the Battle of Boi Loi Woods.

The oldest of four sons born to Louis and Betty Langone, Tony Langone was raised in the Little Italy surrounding Taylor Street, where he still lives today. He attended Our Lady of Pompeii, Holy Trinity and St. Callistus grade schools and Holy Trinity High School, and fondly recalls the close-knit feel of the neighborhood. “I remember as a kid sleeping on the back porch and we never had to worry about locking doors,” he says. 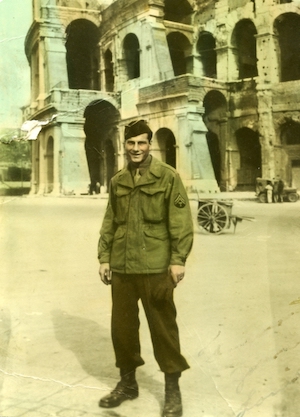 Langone was drafted into the Army in December of 1965. “I didn’t want to go in before Christmas, so I joined. My mother didn’t like it and I don’t think my dad liked it either.” His father was a World War II veteran, serving as an interpreter in Italy, and was wounded when ammo exploded while he was guarding prisoners.

Leaving home for the first time, Langone completed basic and advanced infantry training at Fort Polk, La. The soldiers knew they were headed to the jungles of Vietnam. Another soldier from Illinois told Tony, “When we get back home, I’m gonna throw the biggest party you ever seen on my farm and you’re coming.” But he never made it home alive, Langone laments. “Poor George, he made it home in a box, covered with a flag!”

In June 1966, Langone deployed to Vietnam. “I could never forget the smell of that country when I got off the plane. It was terrible. It smelled like a toilet!” Originally assigned to the 1st Cavalry Division, Langone was transferred to the 25th Infantry Division, 27th Infantry Brigade, 1st Battalion, a unit know as the Wolfhounds.

During his 13-month stint in Vietnam, Specialist 4th Class Langone served as a rifleman, ammo bearer, grenade launcher, tunnel rat, machine gunner and, at the end of his term, jeep driver.

He vividly recalls the search-and-destroy missions. “If anything moves, you shoot it.” The soldiers boarded helicopters and headed to the Landing Zone (LZ). Usually there were eight helicopters accompanied by two gunships to protect the soldiers on these missions. The doors of the chopper were never closed. “We’d sit down on the edge of the floor and our feet would be dangling on the landing skids,” he recalls.

Sometimes the LZ was “hot,” meaning that they were landing under fire. “When going into a hot LZ, as soon as we’d get down low enough, we’d jump, maybe two stories, into a rice paddy,” he explains. “You’re going into two feet of water and two feet of mud. We were all young so we didn’t care.”

Between battles, Langone’s unit returned their base camp at Cu Chi, about 20 miles outside of Saigon. There they took showers, slept in bunks and ate hot meals. A highlight was receiving mail from home. Langone’s mother routinely sent care packages filled with cookies, pepperoni and cheese.

Though relatively secure at Cu Chi, the soldiers were never far from the enemy. “Every day was like a battle, even when you’re in base camp,” he says. “There was a sergeant going home the next day. We got a mortar attack and he was killed!”

The Viet Cong dug tunnels camouflaged by the jungle and moved stealthily through them underground. As a tunnel rat, Langone went down alone with his .45 and grenades to rout out the enemy. “If I see anybody in there, so be it,” he says. “I’ll never forget the first guy I met in a tunnel. I saw him, he turned around and ran one way, I turned around and ran the other way. I went back and threw the grenade where he had run!”

The Battle of Boi Loi Woods was the worst that Langone was involved in. Two battalions went into combat against the Viet Cong and became trapped in the jungle for more than 30 days. The fighting was non-stop, day and night. “Charlie was constantly trying to attack us,” Langone says, referring to the enemy by their commonly used nickname. “Once we set up a perimeter, he couldn’t get inside so he tried to go around all different sides. We made sure there were no tunnels coming into our perimeter.”

Choppers dropped C rations and ammo to support the trapped soldiers. The men took turns resting in foxholes when they could. “We’d sleep with our eyes open,” Langone recalls. “I never knew you could do that until I was over there.”

The fighting was brutal. “I don’t even want to talk about it,” says Langone. They went in with two battalions and came out with one-and-a-half, with his battalion suffering the worst losses. “Thank God we got out of the jungle. A lot of my friends didn’t.”

To this day, Langone has a piece of shrapnel in his hand from that battle, but when his superior officer told him he was going to put him in for a Purple Heart, he refused. “I told him ‘No you ain’t. Not with all my friends getting killed out here!’”

Langone saw many a chopper get hit and go down. “Thank God I was never in one that got hit!” he exclaims. He has nothing but admiration for the medics who flew in on choppers to evacuate the wounded. “Those guys had to have guts like you wouldn’t believe to come into hot LZs while being fired upon to get wounded soldiers out and take them back for care,” he says.

As a jeep driver, Langone drove with his captain and groups of medics into villages secured by the South Vietnamese to administer medical care to civilians. “Every time Charlie saw us, they’d start shooting and some of the South Vietnamese would take their shirts off and go to Charlie’s side,” Langone recalls with renewed horror. “You didn’t know who to trust!”

Returning to the United States in July 1967, Langone was stationed at Fort Clayton in Panama, where he worked as a demolition expert guarding landmines being tested for Vietnam. He was discharged from the Army in December 1968.

Back home in Chicago, he worked as a truck driver until joining the Chicago Police Department in February 1982. Langone was a police officer for 25 years, earning 49 honorable mentions, a Reduction in Crime Award from the CTA, and a Department Commendation for his role in saving 13 people from a burning building.

Reflecting on his time in Vietnam, Lagone says, “I was doing it for my country.” He remembers watching his friends die and asking, “Why did it happen to him and not me?” And he remembers the horrific fighting in the Boi Loi Woods and praying, “God, please let me get out of here!”