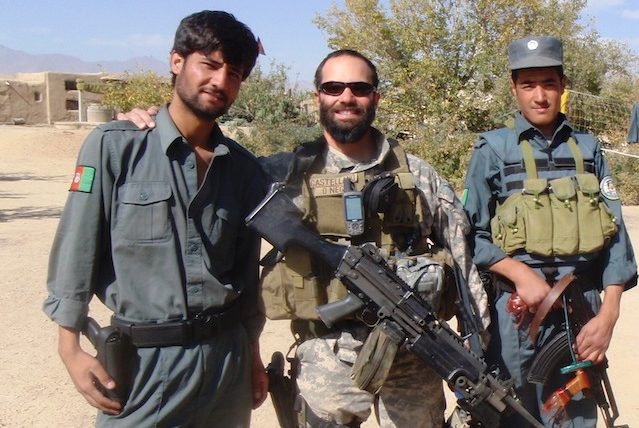 After doing three tours of duty during a four-year enlistment with the Air Force, Billy Castellano trained Afghan police as a consultant for the U.S. Department of State.

William “Billy” Castellano grew up in the Galewood neighborhood of Chicago. The youngest of six children, his father was a Chicago police officer and his mother worked in property management. Being “raised by a village,” as the saying goes, Castellano knew that if he misbehaved in the neighborhood, someone’s mom was likely to “smack” him. And if he complained to his mom, he would get smacked again.

Castellano attended St. William’s Grade School and St. Patrick’s High. By the time he reached high school, he knew college wasn’t for him and decided to join the Air Force as his father and brother had done while they were still in school. Castellano graduated from St. Pat’s in May 1995 and left for boot camp at Lackland Air Force Base in San Antonio, Texas.

The training wasn’t physically challenging, but it was mentally demanding, with attention to detail being stressed at every turn. Castellano believes that the respect for authority he learned while growing up helped him succeed.

“Being the youngest in the family, growing up in what I describe as this village atmosphere, there was just a healthy respect, if not a little fear, for authority,” he explains. Castellano focused on getting his work done, keeping his head down and not drawing a lot of attention to himself.

Every Air Force installation, nuclear missile and overseas base has Security Forces to protect them, and that’s where Castellano was assigned. After training, Castellano shipped off to Malmstrom Air Force Base in Great Falls, Montana, where he was tasked with guarding nuclear missiles. He describes this as “a really unique experience,” where all the attention to detail stressed during basic training came in handy. “You’re not really allowed to not dot all the I’s and cross all the T’s,” Castellano says.

While based in Montana, Castellano deployed to the Middle East three times. A machine gunner who carried an M60, he was first deployed to Kuwait in response to the terrorist bombing of Kohbar Towers. He was stationed on Al Jabber Air Force Base, where his responsibility was to protect the base and its F117 fighters. Castellano worked 12-hour shifts, six days a week.

Castellano’s third deployment was back to Al Jabber in Kuwait as part of Operation Desert Strike, which targeted Saddam Hussein’s anti-aircraft artillery in response to his removal of U.N. inspectors.

Castellano spent about five months at each of the deployments, returning to Montana in between. The daily routine was similar for all three.

Each evening after roll call, he got his assignment, which included patrolling the desert in a Humvee with a machine gun mounted on top, protecting a guard tower or driving an ATV outside the airfield.

Fifteen men shared an air-conditioned tent, gaining privacy by hanging sheets. “The focus was on work,” Castellano explains. “Setting up security operations, putting up barriers and setting up gate structures.” Castellano recalls hearing Scud missile alarms with the Patriot missile batteries prepared to shoot them down.

Eighteen years old when he first went overseas, Castellano recalls, “When they tell you you’re deploying and you can’t tell your family where you are going, and here’s all your equipment, and then there’s your airplane waiting for you to get on it, you’re like, ‘Oh no, this is it.’” 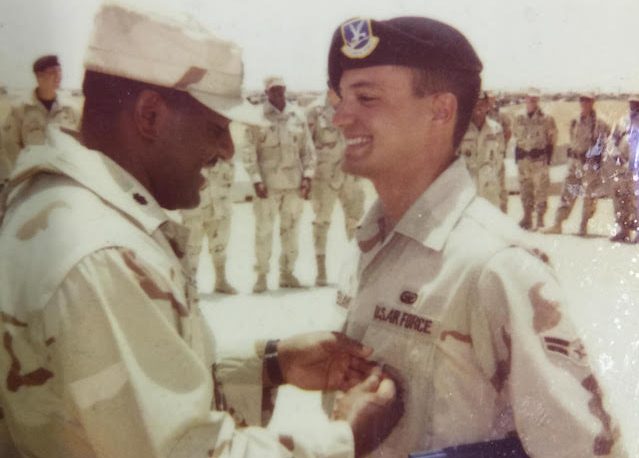 Castellano receives his third expeditionary medal while in Kuwait in 1999.

Upon discharge, Castellano worked in security and eventually became a police officer. He also was a law enforcement instructor and trainer in many disciplines, including firearms, defensive tactics and active shooter response. Ten years after the Air Force, Castellano was approached to work with the U.S. Department of State teaching local police in Afghanistan. He was told that he would live on a State Department compound.

It sounded like a dream job to Castellano, and he jumped at the chance. Upon arrival, he was embedded with the U.S. Army, but instead of living on a State Department compound, he was assigned to a forward operating base in the mountains of Ghazni.

He was supposed to have about 100 Afghan police officers under his tutelage, but ended up with only 12. Police in that region were more like the National Guard than the police that we relate to. They have big guns and mortars and actively fight the Taliban and other terrorists. The district center was in disarray, with only a dozen Americans on his team along with their Afghan counterparts.

Castellano’s job was to evaluate security needs and then train accordingly. Once he trained and equipped the Afghans, Castellano went out with them to oversee their operations. He and another front-line civilian were embedded with 12 American soldiers. “It was a little scary in that we were pretty isolated and the district we managed was a pretty dangerous place,” Castellano says.

There was a lot of contact with the Taliban and Castellano’s group was attacked during their first visit to the district center for the rural police. He recalls sitting with an in-place machine gun, providing security on top of a building. Suddenly he heard an ear splitting sound as an explosion hit off to his left, knocking him out of his position. He yelled, “Incoming!” Incoming!” The fighting continued for three hours. Thankfully, there were no casualties or loss of equipment. “It was a harrowing experience in that we were mortared, rocketed, and under small-arms fire,” he recalls. Luckily they had air and artillery support from another base.

Castellano stayed in Afghanistan for one year. He had an idealistic vision of going to a third world country to help and train the people. After the first mortars fell, he realized, “Holy cow, I have a front row seat to the global war on terror!” His unit was under attack nearly every time they went out. “Every day, I am thankful for the fact that we were so very lucky that nobody got hurt,” he says.

After his return from Afghanistan, Castellano reconnected with his former high school sweetheart. They married and are now living in his childhood home. Castellano is a part-time police officer and also provides consulting and training for corporate security, in addition to firearms training.

“When I got out of the military, I kind of felt like I was missing something,” Castellano concludes. “I found that something during my deployment to Afghanistan as a front-line civilian. Outside of marrying my wife, my experiences in the military and Afghanistan are the fondest that I have and those events are what shaped me and have made me the person that I am today.”