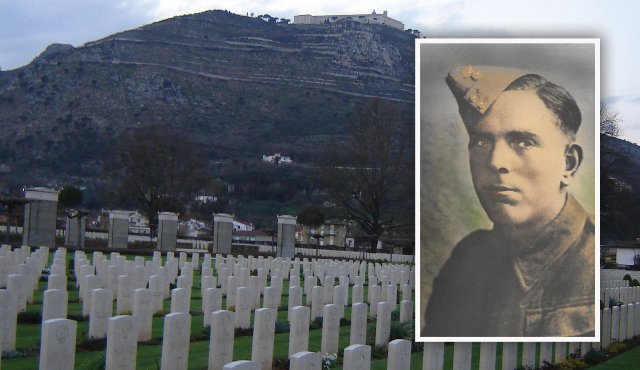 While stationed in Italy at the end of his military career, Retired Army Lt. Col. Robert Ruffolo helped an RAF officer find the grave of a grandfather who gave his life while storming Monte Cassino during World War II.

Prior to my retirement from the U.S. Army, my last military assignment was to the United States Diplomatic Mission to Italy in 2012. These are normally capstone assignments that wrap up a career, but, looking back, a greater power “arranged” that assignment for another reason.

An adjunct duty in my assignment to Italy was serving as one of the seven national representatives to the Italian Ministry of Defense. An officer I grew remarkably close to was Royal Air Force Wing Commander Michael Edwards, the U.K. liaison officer to the ministry, along with his Scottish wife, Carol. He speaks Italian with a markedly British accent, making him an interesting fellow to listen to. He was incredibly important for our diplomatic mission, as there were many joint operations the U.S. and U.K. conducted and coordinated with our Italian military partners. 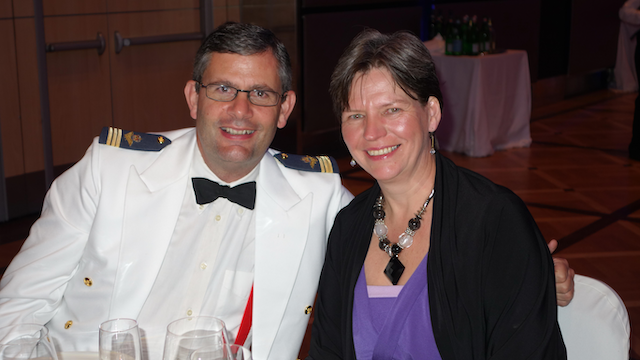 Destiny had also assigned Mike to Rome, and I met him for the first time in October 2012. We immediately became known in the Ministry of Defense as “Il Blocco Anglo-Sassone” (the Anglo-Saxon block), because where there was one of us, the other was never far away. We traveled up and down the Italian peninsula conducting World War II commemorative ceremonies and other representational events, and we spent lots of personal time together, as well. We became quite close.

Genealogy is one of my personal hobbies, and, in 2014, Mike asked if we could create a family tree for him and research his line, as his father had passed away without transferring the family history. I felt Mike was missing a key component in his life; he was desperate to find something. We both sensed this research would further deepen our relationship and help fill a void for Mike.

Mike’s grandfather, Albert George Edwards, married a young woman named Elizabeth “Betty” Hoare in 1941 near Buckinghamshire, Great Britain. That same year, Albert departed London for service in Tunisia as part of First Battalion, the Royal Fusiliers (the city of London’s infantry regiment), leaving a pregnant Betty behind. Late in 1942, a son, Anthony John Edwards, was born to the couple in High Wycombe, Buckinghamshire.

Albert fought alongside his fellow Fusiliers and endured military campaigns across Tunisia and up the Italian boot as part of the “One More River” campaign. Then, British commanders ordered the Fusiliers to assault Monte Cassino.

The four-month-long Battle of Monte Cassino was a morass of poor intelligence, miscalculation and ego that fueled a critical Allied error — a desire to take the rocky fortress known as the Abbey of Monte Cassino instead of isolating and bypassing it. The battle was already at an impasse, as dug-in Axis forces held the hill around the abbey.

On May 15, 1944, during the opening day of the Fourth Battle of Monte Cassino, an Axis sniper killed Fusilier Albert George Edwards. Albert never met his newborn son. His wife eventually remarried, but assured Anthony kept the last name Edwards in honor of his father. Anthony later married and had three children of his own: Michael, Helen and Robert Edwards. Over the decades, Betty became unsure of which regiment Albert had served in as well as the details surrounding his death. Albert was lost to time.

As I got to know Mike, I learned more about his own military history. After completing a university degree, he went to a military recruiting interview organized for both him and his roommate. The RAF had one billet for officer training that rotation. Mike passed a series of in-person written and oral examinations. He interviewed so well that he was granted the position and, in 1988, entered officer training, eventually becoming an officer in Her Majesty’s Royal Air Force. Mike served in a variety of both combat and noncombat roles, which placed him on a similar path to mine, in a capstone assignment as a foreign liaison officer to Italy.

As I continued to build the Edwards family tree, I could sense Mike (who was always a happy-go-lucky Londoner) was becoming anxious and emotional. So I said, “Let’s move to the other part of the tree.” I asked Mike open-ended questions to try to confirm birth and death dates and locations of his ancestors, but also to get a sense of who he was and how he felt about this experience.

After about 45 minutes, we had six generations of Edwardses in the family tree. I learned that Mike’s great-grandfather Sergeant Walter Edwards also served in the Royal Air Force and died in Baghdad, where British Forces interred him in the nearby Commonwealth War Cemetery. Mike had passed that cemetery every day while serving in Baghdad during Operation Iraqi Freedom in 2004-05, but never knew that his great-grandfather was buried there. I could tell by his reaction to that discovery that he was aware he would never get to see that grave in Iraq because of the current security situation there. As a result, it was imperative that we find his grandfather in Italy. It was not a coincidence we had both been assigned there.

Refocusing our research, we quickly discovered that Fusilier Albert George Edwards rests eternally in the Cassino Commonwealth War Cemetery, Plot XVIII, Space K6, two hours south of Rome. I watched Mike’s face; he was stunned. It was as if his grandfather was speaking to him across seven decades, exhorting Mike to come visit for the first time. It gave me chills. We immediately called his sister, Helen, and she agreed to come to Italy.

On March 13, 2015, by the grace of God and the kind friendship of Suor Myriam Castelli and the RAI Italia Cristianità TV staff, a tour was organized of the Abbey of Monte Cassino, and a film crew accompanied us on the journey. As we examined the terrain, I could see Mike reflecting on what his grandfather must have endured as he charged up the hill before the Axis sniper felled him. After the tour, we captured in perpetuity the reunion of a brother and sister with their grandfather for the first time in 71 years. RAI Italia Cristianità globally televised this story.

Nobiluomo Robert Ruffolo, knight commander of the Order of St. Gregory the Great, is a retired U.S. Army officer and diplomat emeritus. He earned a bachelor of arts degree in modern European history and also two master’s degrees. He has been knighted seven times for his work internationally.