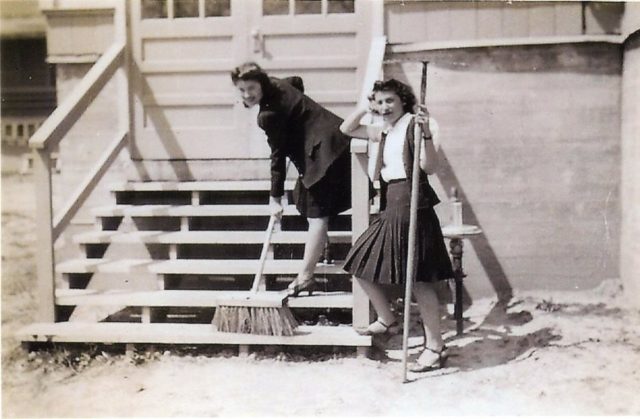 Then there were all the other women who did their part in their own way. I want to tell you about two of them: my mother and my aunt, Angie Grippo Magnine and Marie Chiappetta Grippo.

They both grew up in the Italian neighborhood surrounding Taylor Street in Chicago. Angie had younger brothers, one of whom was Emil. It seems that young Marie took a liking to Emil, and Emil took a liking to Marie. 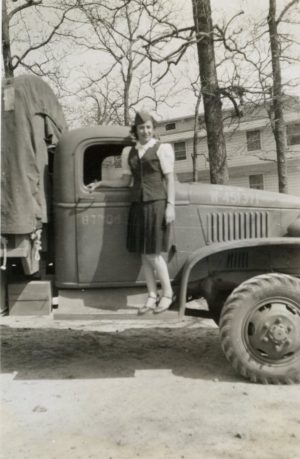 I want to give you an example of their fondness for each other. Back in 1941, young men between certain ages were required to register with the Selective Service. One of the lines on the form requested the “name and address of a person who will always know your address.”

Most of the men put down their parents’ names, or their wives’ if they were married. Emil wrote “Marie Chiappetta G.F.”

Well, Dec. 7, 1941, arrived, and Emil joined the Army. After spending Christmas with his family, he left for Basic Training at Camp Robinson in Arkansas.

At some point during training, he had visitors from Chicago. I found out about this many years later when I was shown a series of photos of my mom and aunt at Camp Robinson. My mother had passed away by then, so I spoke with Aunt Marie and learned how this came to be.

It seems she missed Emil and found out where he was through letters. She realized that Arkansas was a hop, skip and a jump from Illinois. Now came the hard part: How to get her mother to let her go visit her boyfriend. At an Army base. In another state.

I had the good fortune to know Mrs. Chiappetta. She was an Italian mother who was very protective of her daughters. My aunt told me that there were a lot of energetic discussions regarding the trip. She tipped the scale in her favor by telling her mother that Angie would be going along as a chaperone.

Mrs. Chiappetta gave her consent, and off they went to Little Rock, the closest town to Camp Robinson. They rented a room from a woman in town, and that’s how they started on their big adventure.

The photos show them sweeping stairs, peeling potatoes, donning uniforms, posing next to trucks and cannons, and generally palling around.

Besides being there for Emil, they were there for the boys, talking to them and helping them remember their families and homes.

After an enjoyable trip, Angie and Marie returned to Chicago. They had done their part, and the boys were sent off to do theirs. Uncle Emil was assigned to the 12th USAAF, taking part in several campaigns in the European Theater of Operations. Angie and Marie went back to writing letters to him, and my mom wrote plenty more to the new friends she made through the USO.

So you see, Angie and Marie did their part to bring joy to those in the military. Multiply that by all the women who did the same, and that’s a lot of joy.

The war ended, and Emil returned home to Marie. They were married at the historic Holy Family Church. My mom married a Navy man, John Magnine, about a year later.

Flash forward 30 years, and I was stationed at Ft. Lewis in Washington state. Mom came to visit me, and, wouldn’t you know it, Aunt Marie, Uncle Emil and my father were also there. Old habits die hard.

— This article was written by Peter Magnine