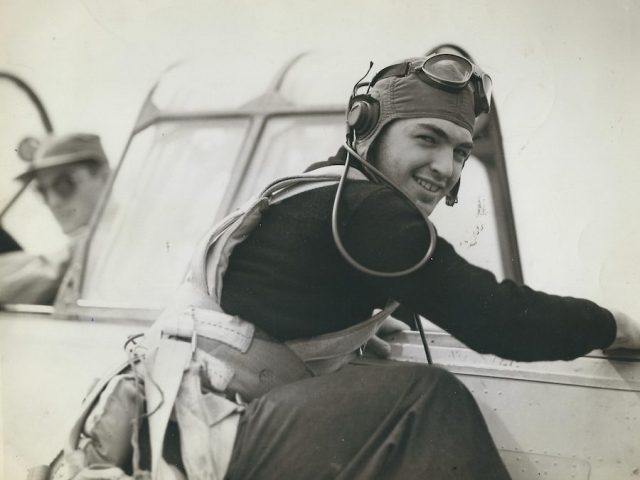 Realizing is dream of becoming a photographer by joining the Navy during World War II, Ralph Triggiano captured the enemy’s presence in the Pacific from 10,000 feet and the horrors of war from point-blank range.

Ralph Triggiano was born in Chicago and grew up in the neighborhood of Taylor and Peoria streets surrounded by his maternal grandparents, aunts and uncles. Triggiano’s father, Joseph, emigrated from Carbonara di Bari, and his mother, Emmanuela Lorita, was born in Basilicata.

Only five years old when his mother passed away, Triggiano moved in with his grandparents while his father worked on the railroad. “The aunts and uncles were really great,” says Triggiano. His father remarried, and he has a half brother and half sister.

Childhood memories include hanging out at Hull House and participating in many activities, including softball, dancing, ping pong and boxing. “It was a fabulous place,” he says. His grandmother made bread dough and carried the bundle on her head to Atlas Bakery to be baked for 20 cents. “I would pick up the bread at night,” Triggiano says. Monday was soup night, and Thursday was macaroni. “Every Sunday after mass, the whole family dropped in,” he says.

Triggiano graduated from Guardian Angel Grade School and St. Patrick Academy. He was eager to join the Merchant Marines at 17 years old, but his father would not sign his permission and said, “Wait, they’ll call you.” He was employed as a copy boy at the Times, hoping to get into the dark room, when he was drafted in 1943. Triggiano chose the Navy because of his interest in photography. “I was glad to go,” he says, “I hate war, but you got to defend your country.”

In San Diego, he boarded the USS Suwannee, CVE27, an escort carrier. The ship was home to 830 men and 25 planes, each with its own crew. The Suwannee set off into the Pacific, traveling in a convoy. From Gilbert Islands, Marshall Islands, Mariana Islands, the Philippines and the Battle of Leyte Gulf, to Okinawa, Triggiano remained on the ship as a reconnaissance photographer. His two biggest jobs were mapping Guam and Cebu in the Philippines. The aerial renditions he made from his photos were given to intelligence officers. This information was crucial in fighting the war.

In the torpedo bomber, alone with the pilot, Triggiano set up his camera in the belly of the bomber and took photos as they flew back and forth in a set pattern. The targets were enemy air bases. He processed the photos, took the middle of each and feathered them together to get an accurate rendition of the area.

During other reconnaissance flights, along with the camera placed in the plane’s belly, Triggiano also shot photos from the open cockpit with an F20. The camera had a trigger that turned the lever and the film. “It was beautiful: turn it, trigger, turn it … 50 feet or 25 feet of film,” he says.

In Guam, Triggiano took the photos and packed them into a watertight kapok attached to a parachute, opened the cockpit canopy and dropped it down to a waiting motor boat. He needed to be close to the ground to get accurate shots. The pilot was flying at 10,000 feet in the Philippines, and when Triggiano said he needed to get down to 2,500 feet, the officer yelled at him. “I know why; he didn’t want to get shot at,” says Triggiano. “I don’t blame him.” Flying low over enemy territory, they were under attack on every reconnaissance mission. “But we got lucky, and none of them ever hit us,” he says. “Your adrenalin works up real well.”

Flying over Cebu, Triggiano photographed more than 100 planes on the base. He explained that some of the planes are legitimate and others are mock. “Intelligence has to know this,” Triggiano says. “I’m really proud of that one.”

On Oct. 25, 1944, the Suwannee was embroiled in the Battle of Leyte Gulf. Her sister ship, the Santee, received the first hit from a deliberate suicide attack of the war. Seconds later, a Kamikaze bomber crashed into Suwannee’s flight deck, its bomb exploding on impact. Triggiano heard and saw the plane and instinctively ducked as it crashed. “So I looked up after the sound was over and jumped up on the deck; everything was burning.”

He watched as men climbed a ladder trying to escape the fire and witnessed many being thrown into the sea. “I was like a rabbit at the beginning, I kept running up and down the catwalk, because of the fire,” Triggiano says. “Then I said whoa to myself and just jumped down on the deck and started photographing.” One of his buddies was always with him and hearing the explosion ran with another sailor for the ladder to the deck below. “They got mashed like meat. If he’d have stayed with me he would have … ” Triggiano chokes. “You know, that’s the way things are.”

The gash in the deck was repaired in 90 minutes. The next day, Oct. 26, the second Kamikaze attack stopped the Suwannee from operating. The plane hit one of the two elevators on the ship, which were crucial to the repair and rotation of the bombers. “Once they hit that forward elevator, we were dead,” Triggiano says. He was in the photo lab and, hearing the tremendous explosion, ran topside and witnessed the havoc. “You become numb; it’s hard to imagine,” Triggiano says. He saw his friend, only 19 years old, naked and dead. “It was horrible,” he says. Hundreds of men were killed instantly, and others suffered terrible injuries during these two attacks.

The Suwannee returned to Bremerton, Washington, for repairs and then headed to Okinawa. “That was miserable, very bad,” Triggiano says. “Every night at 4:30, the Japs sent their planes out to attack. We were lucky,” he says. “We never got hit.”

Triggiano had leave in Nagasaki only two weeks after the bomb was dropped. “They took us through these fields of nothing, just concrete posts,” he says. “Total devastation!” He has photos of the ruins. “The thing that really I was against was the atom bomb. I was shocked that we did that,” says Triggiano. “It could have been done differently, I think. Who knows?”

Triggiano was discharged in 1946 as petty officer 2nd class. He returned to Chicago and married Alice Bartolomei in 1949. They have three children, four grandchildren and one great-grandchild. Triggiano is retired from the trucking industry.

He looks back 75 years ago. “The amazing part is you saw so many American ships that you felt like you could walk from one ship to another … it was amazing, the might of the United States. It was truly awesome. I would look over there and my God, I was just struck by the enormity of our power.”