Trained in heavy artillery, Ralph DeBartolo switched from the smaller 105 howitzer to the massive 8-inch howitzer, targeting the enemy as far as eight miles away.

Editor’s Note: Ralph passed away in January 2021. This article was published in the November 2016 issue of Fra Noi and is being republished here in his memory.

The oldest of six children, Ralph DeBartolo was born to Anthony and Katerina DeBartolo in June 1933. The family lived together with Katerina’s parents at 1029 S. Almond St. between Taylor and Grenshaw Street. “The whole block was from Calabria,” DeBartolo says. The neighborhood was close-knit and everyone helped one another. 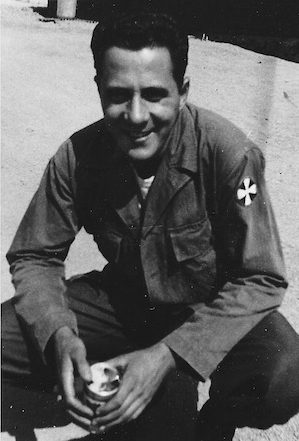 DeBartolo attended William Penn Grade School and Farragut High School and was 17 when the family moved to Berwyn to live closer to relatives. Shortly afterward, DeBartolo’s father passed away at only 37 years of age, and DeBartolo went to work on the railroad at age 18 to support the family. His brothers and sisters ranged in age from four months to 15 years old and times were tough.

The Korean War was going strong and DeBartolo enlisted in the Army in July 1952. “I decided to join the Army to do my job as an American,” he says. “My mother wasn’t too happy!” His pay was $90 a month at that time. “When I first joined, I made them aware that I wanted my whole check, but for $10 to go to my mother.”

DeBartolo received basic training at Fort Sill, Okla., followed by specialized artillery training and was assigned to the 105 Howitzer Battery in Korea. After a five-day furlough, he traveled to Washington and along with about 2,500 troops boarded the General John Pope headed across the Pacific. DeBartolo recalls, “I was excited.”

Storms and rough seas made the 17-day voyage “horrible.” The young soldiers — 18, 19 and 20 years old — were homesick, seasick and worried about what they were headed into. “We were all talking about going out there, doing our job and coming back home,” DeBartolo recalls.

The ship anchored in Inchon, Korea, about 2 a.m., and in the dark of night, the troops climbed down rope ladders onto a barge that took them to shore. “Going ashore we could hear all kinds of explosions which naturally made us nervous,” DeBartolo remembers. Trucks were lined up and waiting in the sub-zero temperature to drive the troops to their various locations. DeBartolo was assigned to Battery A, 17th Field Artillery Battalion, I Corps. While still on the ship, he was transferred from the 105 howitzer to the 8-inch howitzer, the largest artillery in Korea.

DeBartolo’s unit moved daily. “Our biggest concerns when we were moving from location to location were land mines,” he says. A minesweeper led the convoy followed by six half track tanks, each hooked up to an 8-inch howitzer. Trucks carried the troops.

When they arrived at the designated area, the soldiers quickly dug a trench just deep enough to put the back end of the gun in so it wouldn’t move. “There was a hell of a recoil,” says DeBartolo. It took three soldiers to load a shell, one on each end of the shell and the third to guide it into the chamber, put the gunpowder in and shut the door. “The noise was unbelievably deafening,” recalls DeBartolo. “We barely had enough time to cover our ears.”

The gunfire was constant and the sounds filled the air as shots echoed in the mountainous terrain. The 8-inch howitzer had a firing range of eight miles so the men in DeBartolo’s unit were back from the front line and could not see the enemy. They communicated with the Fire Direction Center stationed on a hill. The FDC radioed location information to the soldiers. “They would tell us how to set up and aim,” says DeBartolo. “We would fire maybe 100 shells … it was continuous.”

The FDC radioed if they got a hit and advised how to maneuver the howitzers to target the Chinese troops and tanks. “The poor guys in the front, the 105s,” DeBartolo says, “they had it the toughest because they were right up front with the infantry.”

At night, the soldiers each stayed in their own small tent in a sleeping bag trying to stay warm in freezing conditions. They could not build a fire as it would give away their location and they ate cold food right out of the cans. “The weather was horrible and we had no way to warm up,” DeBartolo remembers. “All we had was one metal hand warmer … the nights were long because we were so cold!”

DeBartolo and his men returned to their base near Inchon every week or two and stayed for a couple of days before heading back to battle. Twenty men shared a tent heated by a small heater. The highlights were warm food, a shower and getting mail from home.

DeBartolo wrote to his mom and she sent letters and care packages with provolone, salami and Italian cookies. Most of the soldiers in his unit were Italian and they also received packages with goodies from home. “We would share,” DeBartolo says. “And then we’d have a party.”

Celebrities visited occasionally to entertain the troops. A makeshift stage was set up and the show would go on to the delight of the battle weary soldiers. “Terry Moore was our Betty Grable, our girl during the Korean War,” recalls DeBartolo.

Most of the men in the 105 howitzer battery that DeBartolo was originally assigned to were killed after being overrun by the Chinese. “During the war, I felt very lucky that I was transferred from the 105s to the 8-inch howitzers,” he says.

The Korean War ended in July 1953, but DeBartolo remained in Inchon until 1954. He was discharged as a corporal and returned home to Berwyn. He married his wife, Helen, in 1956 and they have two sons and one grandson. DeBartolo was a Chicago Police Officer for 32 years. After retiring from the CPD, he was with the Cook County Sheriff’s Department for 25 years, the last 15 as a chief.

Two of DeBartolo’s brothers served during the Korean War. Bernard was with the infantry in Alaska and Patrick was with the Air Force in Hawaii. His youngest brother, Arthur, fought in Vietnam with the army infantry and was awarded two Purple Hearts.

DeBartolo remains in contact with several of the men from his unit and regularly sees Dominic “Mase” Narcissi, who lives in the Chicago suburbs.

Reflecting on his time in Korea, DeBartolo says, “Korea was one of the most horrible places you could be at that time.” The people lived in straw huts and health conditions were horrible. “The Korean people were very nice to us and appreciative,” he continues. “They suffered a lot, too … I’m just lucky to be an American.”

Remembering the battles and all the young men whose lives ended too soon, DeBartolo says, “God was watching over me.”