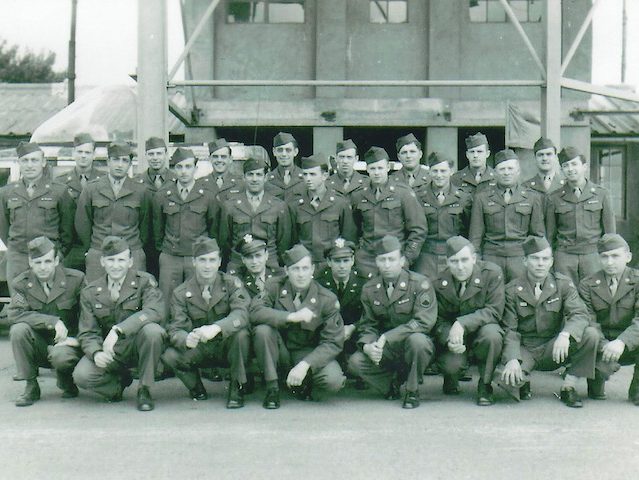 An airfield controller in England during World War II, Bob Pasquesi did his best to assure that the pilots in his fighter group took off and landed safely.

One of five children, Bob Pasquesi was born in Highland Park in 1924. His father, Sante Pasquesi, emigrated from Modena, Italy, at the age of 13 to join his uncle at Gonnella Bakery in Chicago. His mother, Linda Vitali, was born in Ferrara, Italy. 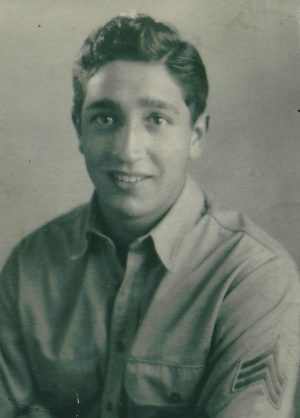 Pasquesi grew up in Highland Park and graduated from St. James Grade School and Highland Park High School. His family ate dinner together every evening. “If you missed a meal, you missed everything,” says Pasquesi. “That’s when everybody talked.”

He was drafted into the U.S. Army shortly after graduating from high school in 1942. He completed basic training in Miami Beach, Florida, and infantry training in San Antonio, Texas. Through the influence of his brother, who worked in recruiting at Camp Grant in Rockford, Illinois, Pasquesi was transferred to the Army Air Forces. “I found out I didn’t like to walk,” he chuckles.

Combat maneuvers came next in Greenville, South Carolina. After three months, the soldiers were told, “get your stuff ready” and they traveled by train to Norfolk, Virginia, where they boarded a Liberty Ship for a three-week voyage across the Atlantic.

The soldiers were told to watch the moving radar signal on the ship. When it stopped, it meant enemy submarines were near. “So then we start thinking, ‘Hey, this is war,’” Pasquesi says. “‘This is getting to be serious.’”

“We were just kids!” he says. “At 18 years old, you want to be a hero; you think you’re a big shot. And you find out very shortly that you wish you were home.”

The troops landed in Ipswich, England, and boarded transport trucks to Station F133, a newly formed air base located on an old farm in East Wretham, England. Pasquesi was assigned to the 49th Station Complement Squadron, a support outfit to the 359th Fighter Group.

The 359th consisted of three fighter squadrons — 358th, 369th and 370th — with 15 planes each. The P-51 Mustangs, single-seat fighters, escorted and supported the B-17s and B-24s on missions. The pilot flew, navigated and controlled the guns. “He did everything,” says Pasquesi.

Tech. Sgt. Pasquesi trained at a Royal Air Force school to become an airfield controller. He attended daily mission briefings and learned what time planes were taking off and where they were to meet up. Pasquesi directed the P-51s as they took off and landed on a rough, pothole-filled area with no runways. Germans attacked the base almost nightly, making conditions worse. “They’d come over and bomb the fields so you couldn’t get the planes off,” says Pasquesi.

He stood in a tower, positioned in a truck on the field. From that spot, he communicated with the pilots, lined them up and gave them permission to take off. All 45 planes flew every mission and took off one after another. “The main objective of the fighter group was to take care of the bombers so that they got through to drop the bombs,” says Pasquesi. When the mission was completed, the P-51s used remaining ammo to strafe airfields and trains before returning to the camp. “When planes returned, they aimed for me,” he says. A hole in the truck floorboards was his escape in case a plane struck the tower.

Pasquesi waited in the tower to direct the landing planes, listening throughout the mission. “You know just about how many are lost, how many got shot up, so you’re anticipating everything that’s coming back to you,” he says. Some returned shot up or one wheel up, one wheel down. “You tell him to try to divert from the main runway and get them over to a side area,” says Pasquesi.

“There were more crashes on the ground than when they were in the air,” he says. Upon takeoff and landing, planes bounced up and down on the crude field; if a propeller hit the ground, the plane tipped over. “If they were shot up, they were going to crash. When a crash happens, it’s like a highway, everything stops,” Pasquesi says. “Well, you can’t stop it there!”

He was the last person to see a pilot when he took off and the first person to see him when he came back, and he kept a log of each flight, checking as each plane returned. “If we didn’t hear from him,” Pasquesi says, “we would mark him down as missing in action.”

One of his best friends was flying in too fast, and Pasquesi warned, “Slow down, you can’t come in! Don’t come in!” The pilot replied, “Oh baloney.” He crashed and was killed. Pasquesi remembers that horrible day and says, “You don’t realize what dying really meant. When you’re 18, 19 years old, everything’s a joke; it won’t happen to me.

“We had crash landings every day,’ says Pasquesi. His burn-scarred arms are a reminder of one. A plane crashed and flipped over, trapping the pilot inside. “We had to get him out,” Pasquesi says. “It was burning!” Others came running to help, and they got the pilot out, moving quickly before any remaining ammo or fuel exploded. Pasquesi didn’t even realize his arms were getting burned. “You don’t think. Really, if you thought, you wouldn’t do it,” he says. “It sounds heroic, but it was routine.”

Occasionally, Pasquesi went to London. He felt badly for the English people who lived in their war-torn city under attack by the Germans. “Every night they had to go down into the tubes,” says Pasquesi. “We’d be walking down the streets while they were bombing them. We figured if you’re going get it, you’re going to get it.”

Many of the men in Pasquesi’s barracks were Italian, and they all missed their mom’s home-cooked meals. From care packages, they gathered ingredients to make a batch of spaghetti gravy on the potbellied stove in their hut. “So we’re cooking and boy, it smelled like home,” remembers Pasquesi. The gravy was almost finished when rust from the stovepipe fell into the pot. “So we never got to eat it. It was the saddest thing.” Another time they tried cooking baccalà that his mom sent. “Oh, what a disaster,” he chuckles.

All four Pasquesi brothers served their country during the war. “My dad was proud of it, but sad. He wrote us every day.” His mom, “a great cook,” regularly sent packages of ravioli and other Italian specialties, but he did not always receive everything. “The stuff was too good,” says Pasques. “The inspectors would keep it.”

Pasquesi was discharged in 1945 and returned home. He owned and operated food concession stands at parks and beaches throughout the Chicago area and also bought and sold military surplus items. Pasquesi married his wife, Gertrude, in 1949, and they had three sons. Now widowed, he has seven grandchildren and seven great-grandchildren.

Pasquesi reflects upon his time in the Army Air Force and says, “I’m happy to do what I could for the country. But my question is, what good did it do? We won a war and how many wars do we have going on now? What did we gain?” He continues, “I had a lot of good friends, lost a lot of good friends.” Holding a list of those from the 359th who were killed, Pasquesi says, “They were kids!”