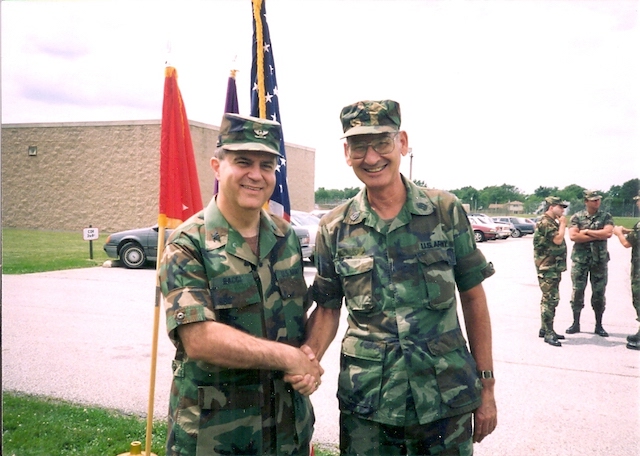 Bacci is congratulated by his uncle, Master Sergeant L.D. Prince, upon his promotion to colonel.

During a distinguished 30-year career in the Army and Reserves, Renato Bacci did everything from helping a nation recover from war to assisting an American police department in its efforts to return lost items to their owners.

The oldest of three children, Renato (Ron) Bacci was born in Chicago and grew up in the neighborhood of Chicago and Kedzie avenues. His parents, Renato (Ray) and Gloria Talevi were both born in the United States; Ray’s family was from Lucca and Gloria’s family from Le Marche.

Bacci’s maternal grandmother lived with them and the family spoke only Italian at home. Realizing their son needed to learn English before starting school, his parents bought a TV. “I learned English from Howdy Doody!” Bacci recalls.

Bacci graduated from St. Matthew Grade School and St. Ignatius High School, and attended Loyola University where he joined the ROTC program. He also continued working as a bank teller at National Security Bank where he had been employed since high school. His family’s military service greatly influenced his decision to be in the ROTC. Bacci’s father was a combat MP, his uncle was an artillery forward observer and his godfather was a Marine pilot. All of them fought in World War II. His grandfather was a messenger in the Italian Army during World War II. “It all has an effect on you,” Bacci says. “It brings you to thinking that defending your country is very important.”

In 1969, Bacci graduated from Loyola with a degree in management and also his commission as second lieutenant. He married his wife, Mary, and worked at Continental Bank before going on active duty in January 1970.

Bacci completed Infantry school at Ft. Benning, Ga., and qualified as an infantry officer. He then attended Civil Affairs School at Ft. Gordon, Ga. He chose to stay on active duty for three years rather than two, knowing he would spend 18 months in Europe and then most likely dispatch to Vietnam. “When the time came,” Bacci says, “they didn’t send me to Vietnam because the war started winding down.” 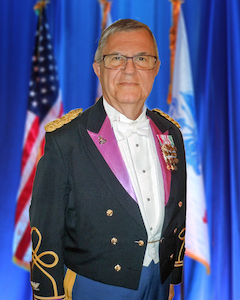 He was stationed in Mannheim, Germany, where he had many duties including overseeing morale welfare and running the Officer’s Club. At 22 years old, Bacci operated the club like a business. Money from slot machines paid for entertainment from celebrities such as Roy Orbison, Johnny Cash and Pearl Bailey. Everything else at the club was offered at a cost that appeared to the officers and instructors that taught at American schools.

Bacci completed his three years of active duty in late 1972 and went into the Reserves, where he stayed for a combined total of 30 years. “A lot of people didn’t go into the Reserves, they did their time and got out,” he explains. “That’s just not my style.”

During the next 27 years, Bacci rose in rank from lieutenant to colonel while being employed full time at two major banks and a software company and earning an MBA from DePaul.

His first assignment was with the 308th Civil Affairs Brigade. “We did things that were very unique,” says Bacci. His property control team worked with the Chicago Police Department, matching up found items with the proper owners. “We spent time helping in their lab and in the department where they get all the evidence in, tag it, track it, make sure it goes to the correct case and so forth,” Bacci says.

As captain, Bacci transferred to the 85th Infantry Division at Ft. Sheridan where he was headquarters commandant for their company with 250 people under his command. His main job was to ensure that the generals had what they needed and that things all happened in the right order.

The 85th was retooled to become an armor training division and Bacci completed training to become an armor officer. As executive officer, Bacci worked with active duty soldiers at Ft. Knox training armor soldiers. If the situation warranted, the reserve soldiers of his unit could be called upon to establish additional armor training facilities. “In other words, if there was a war, they would mobilize your unit to train tankers,” Bacci says. “I enjoyed being an armor officer and I loved being an executive officer: That meant you’re the No. 2 person in the battalion.”

“I was very fortunate to have a battalion command of my own as a new lieutenant colonel,” says Bacci. His background as infantry officer was a contributing factor, along with the computer skills that Bacci acquired during his career in banking.

During the annual summer training in Alabama, Bacci’s reception battalion assisted the active Army when they had a large surge of recruits. “The active components were just amazed at what these reservists could do,” he says. “Fascinating thing: The active Army didn’t have the computer skills.”

The chief of staff of the Army division asked Bacci to return as deputy chief of staff, which he did until he was promoted to full colonel. Only 6 percent of those who applied for the promotion that year were chosen. “You don’t think about it until afterward,” Bacci says.

The 85th Division did not have a position for a full colonel, so Bacci applied to the 308th, where he had started his Reserve career. His experience as a civil affairs officer and a linguist in Italian qualified him as a foreign area officer.

American troops were sent into Bosnia after the Dayton peace accords were signed in December 1995 and the civil affairs were the first to go. Bacci arrived in Bosnia as part of Operation Joint Endeavor and was tasked with helping the country rebuild. The World Bank opened an office in Sarajevo and Bacci developed training programs to teach Bosnians the western style of doing business. His work was highlighted in a June 10, 1996, Wall Street Journal article titled “An Army Reserve Unit Guides Reconstruction of Postwar Bosnia.”

Bacci’s tours of active duty took him to Germany, Bosnia, Croatia, Germany, Italy and the Netherlands. After retiring from the military in July 1999, he joined the Illinois Committee of Employer Support of the Guard & Reserve, which provides free education, consultation and mediation for employers of Guard and Reserve members. Bacci is currently serving a six-year term as chair of the Illinois Committee of ESGR. “Our role is to make sure the relationship between someone who is in the Reserves and the employer who shares that person with the military stays at the highest level possible,” he explains.

Bacci retired from a successful career in financial operations, his last position as senior vice president of ABN AMRO Services Company (LaSalle Bank). He is married and has one daughter and two grandchildren.

Reflecting on his distinguished career in the Army Reserve and especially Operation Joint Endeavor in Bosnia, Bacci says, “It was a wonderful experience to do something for a society to help them come back to life.”