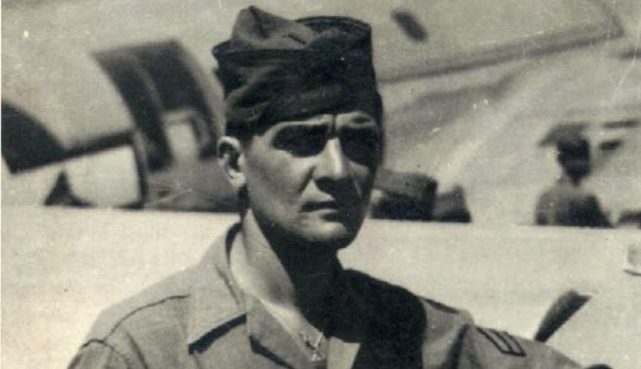 Earning a Bronze Star and Five Battle Stars as a forward observer during World War II, Michael Priami scouted out the enemy’s presence across Europe, communicating their locations back to the troops.

The second of four children, Michael (Mike) Priami was born in 1924 in Hancock, Michigan. His father, Federico, was born in Rota, Italy, and his mother, Davina Barsocchi, was from Lucca. They met and married in Italy and emigrated to Hancock, settling near relatives.

His parents grew a huge vegetable garden with potatoes, tomatoes, eggplant, zucchini and more. “They had everything,” Priami says. He, his older brother and two younger sisters all helped out. In addition to baking bread, his mother canned and preserved the produce. Cousins visited on holidays to enjoy homemade ravioli, wine and buccellato, a specialty cake native to Lucca. Priami’s father worked as a miner and bricklayer. His mom sewed clothing from flour sacks for his sisters. “It was tough times, it certainly was,” he says.

Priami attended Franklin Grade School and Hancock High School. After graduating in 1942, he joined the Army. His father passed away when Priami was 15 and his older brother had been drafted into the Army. “I could have stayed at home as the only supporter of the family,” says Priami. “But I insisted I wanted to go into the service.”

He completed basic training at Fort Sill, Oklahoma, and advanced artillery training in Mississippi. Priami embarked from New York on a seven-day trip across the Atlantic Ocean to England. “The storms were terrible. We all got seasick,” he says.

The soldiers did not talk about the war. “You know, we were all young, never giving a thought about what was happening,” says Priami.

A week later, Priami deployed to Ireland where he was stationed for one year. He was a forward observer with Battery A, 46th Field Artillery in Gen. George Patton’s Third Army and was promoted to corporal. The soldiers constantly trained, going on maneuvers in the mountains four or five days at a time. “We were never aware that we were going to go in, invading France,” Priami says.

One day, they all loaded onto a troop transport and left Ireland. After one day at sea, they mysteriously turned back. A week later they headed out again, destination unknown. “We had heard about D-Day and they kept telling us we could possibly be into it, but not knowing exactly when,” says Priami. As they neared the Normandy coast, the soldiers transferred to a Landing Ship Tank (LST). “When the time came to get onto the ship, we knew that was it,” he says.

Priami remembers climbing into the water on June 11, 1944: D-Day plus 5. “Then you have fear, yes, you do.” Moving steadily toward shore, Priami saw bodies floating in the water and on the beach. “They were just laying there,” he says. “Terrible! It was frightening!” The troops were surrounded by gunfire and bombs but kept moving forward. “We were sitting ducks there,” says Priami.

Each battery had a forward observer and three to five forward observers along with an officer advanced ahead searching for the enemy, always communicating back with the troops. “It was really slow at the time because we didn’t have a foothold yet,” Priami says. They moved stealthily, close to the ground, through the dense hedgerows, always aware that German machine gunfire was just up ahead. “We had to call for fire when we knew where they were, whether it was tanks or troops,” he says. “We had to get them killed before we could move forward.”

Day by day, Priami marched through the French countryside, always alert, searching, while trying to stay hidden. “We would try to get as high as we could so we could get good observation for the enemy,” says Priami. They climbed up water towers or church steeples to get a good view. “But then we were sitting ducks, because the Germans could just pick us off. Thank God they never did,” he says.

Priami advanced through the war-torn towns. “It’s a sad feeling to see that,” he says. “At that point, you realize that this is for real, it’s not games.” The people were happy to see the American soldiers. “They gave us what little things they had,” says Priami. “In turn, with the kids, we’d give them candy bars and they were in awe.”

At times, German soldiers came out from the buildings and surrendered. “They just put their hands up and surrendered … kind of frightening because you didn’t know what they were going to do,” Priami says. The forward observers guarded the Germans until they were turned over to the troops.

In Metz, the forward observers crossed the Moselle River in a small boat. It was vital to move the artillery troops forward. They quickly located the enemy and called back for artillery fire. Surrounded by German troops, their lieutenant told them to return at nightfall. Once again they got into the boat and crossed the river. “Nothing but frightened and praying to God every minute,” says Priami. “Thank God we never got shot at and made it to the other side.”

Priami moved on to the Battle of the Bulge in the frigidly cold, snowy Ardennes Forest. Planes could not fly in the stormy skies. ‘We got stuck because we couldn’t fire any artillery because we were surrounded, and we didn’t want to give away our position, so we just had to sit back and wait,” Priami says. “And I’ll never forget! It was frightening.”

On Christmas Day, Priami cut down a little tree and decorated it with bits of paper. Finally, the skies opened up, and for two days Priami found shelter in his foxhole while Allied planes bombed the Germans, clearing the way. “That was the last big push. We were able to move forward from then,” says Priami.

Priami’s brother was also fighting in the European Theater and near the end of the war, they managed to meet together for a few hours while in Belgium. “It was like a miracle,” Priami says.

When the war in Europe ended, Priami deployed to Austria and rotated back to the States. He was on furlough, scheduled to fight in the Pacific, when the atomic bomb was dropped. He was discharged from Fort Campbell, Kentucky, in 1945 with a Bronze Star and five battle stars. Priami settled in Chicago where his mother and sisters moved to be close to family. He became a butcher and owner of M & M Finer Foods. Priami married Elizabeth Pieri in 1949, and they recently celebrated their 70th wedding anniversary. They worked together at the store until they closed it and opened Loretta’s Gifts and Cards, working together until retiring. Their only son passed away five years ago.

Looking back on his war experience, Priami says, “At that time, it was so frightening, I didn’t know what to think … just praying every day,” he says. “It makes a man out of you.”