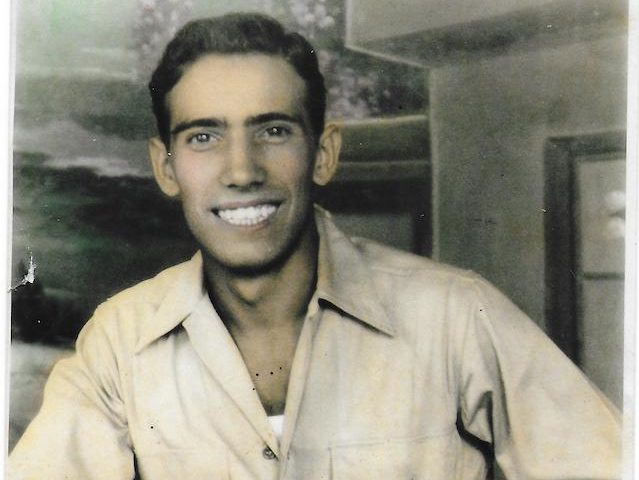 A specialist in small-arms repair, Anthony Iovinelli kept his 36-man unit armed and ready while stationed on Guadalcanal.

The second of four children born to Joe and Ida Iovinelli, Anthony Iovinelli was born in 1920 and grew up in the Taylor Street Italian enclave near Peanut Park. His father emigrated from Naples and traveled alone to Chicago as a young teen to stay with cousins. Iovinelli attended Erickson Grade School and Manley High School and as a boy shined shoes at City Hall after school and on Saturdays. “I helped support the family. Things were rough those days,” he says. “I used to make $7 a week.”

Iovinelli was working for Illinois Lamp Co. when he enlisted in the Army in 1942. His older brother was already in the Army and would eventually serve in Europe as an ambulance driver. “All my buddies were joining,” says Iovinelli. “I felt it was my place to be in the war.” After basic training, Iovinelli transferred to Camp Wallace in Texas, where he completed anti-aircraft training and became a specialist in small-arms mechanics.

He boarded a troop ship with thousands of soldiers, ready for war, and deployed to the Pacific Campaign. “You don’t worry about it,” Iovinelli says, “You don’t think about going into battle.”

Iovinelli remembers zigzagging between islands to avoid being attacked by enemy aircraft and submarines. The voyage to Guadalcanal took 53 days with a one-day stopover in Samoa. “We had clear sailing all the way in,” he says. “We had a lot of protection though, with Navy ships all over.”

“When we first got in port, we saw dead men on the ground … bodies all over,” Iovinelli remembers. “I didn’t feel good about that. You’re gonna think, well, you saw that guy down there and that will happen to you, too … it goes through your mind that way.”

There were 36 men to Iovinelli’s gun crew and they slept in tents on the island. Iovinelli carried a pistol and a submachine gun. As a small-arms repairman, he made daily rounds checking all the guns — 40 mm, 50 caliber and M1s — to make sure they were always in tip-top working condition and ready for battle. In addition to maintenance, Iovinelli repaired all the weapons as needed.

The main mission of Iovinelli’s anti-aircraft gun crew was to protect the port, along with a submarine base and a small airstrip. Guns were placed in strategic positions throughout the area for the best protection from enemy gunfire. The ships carried supplies essential to the war effort, including replacement troops, ammo, artillery, food and whatever else was needed on the island. Planes damaged during battle landed on the airstrip to be repaired and then flew off to their next mission.

“Washman Charlie,” a Japanese raider, flew in at night, often twice a night, and bombed the islands, aiming for the ships in the port and the airstrip. He announced over a PA system, “I’m coming over to see you tonight. I’m coming over to give you a little bombing.” “He was a good pilot,” Iovinelli says. “He came in low, dropped his bomb and shot way up in the sky.” They finally shot him down near the end of the war. “He did a lot of damage … destroyed ships, destroyed planes.”

A great morale booster for the troops was entertainment by celebrities. Dorothy Lamour, Sammy Davis Jr. and Frank Sinatra performed for the soldiers. They flew in for a one-night show and left the next morning for another island. “That one night is terrific … you don’t have your mind on the war at all,” says Iovinelli.

Another morale booster were care packages from home, and Iovinelli’s mother regularly sent packages complete with spaghetti and jars of gravy, peppers and Romano cheese. As luck would have it, his uncle — who happened to be the same age as Iovinelli and was stationed nearby — tracked him down and flew in with some buddies from the old neighborhood for a two-day visit.

Iovinelli managed to procure meat for the gravy and he prepared a complete spaghetti dinner for the reunion. The men had all enlisted at the same time and that was the last time they were all together during the war. They all enjoyed the good food and camaraderie. Iovinelli invited his lieutenant to dinner, too. “I figured in case I get in trouble because of getting the meat,” he explains. “I wanted to be on the safe side.”

Word got around that Iovinelli knew how to make Italian food and when his crew needed a cook, he got the job. For two months, he prepared daily meals for the 36 men in his gun crew. Food was always plentiful and Iovinelli says, “I think we were getting better stuff here than we were getting in Chicago.” He especially enjoyed making pasta dinners for his crew and says, “I liked what I did, it made me happy when they were happy.”

Japanese soldiers often snuck in to raid their kitchens. One night, during his four-hour shift on guard duty, Iovinelli heard a noise in the dark. His captain told the men, “Whenever you hear anything shoot at it, don’t worry about it, shoot at it.” So Iovinelli shot! “Well … it was a cow!” he chuckles. “I emptied my whole gun on it and we had meat the next day!”

Unfortunately for Iovinelli, this incident happened while his buddies were visiting and they all wrote home about the story. “I got razzed for a whole year,” he remembers. “But I wasn’t going to take any chances. If it was a Jap, he was going to be dead.”

Iovinelli was stationed on Guadalcanal until the war ended in 1945 and he shipped home on an LST. He was discharged at Camp Grant in Illinois ranked as a corporal technician and returned home to his family at 5249 W. Drummond Place. He worked for Douglas Aircraft in California for a few years before returning to Chicago. Iovinelli married his wife, Kay, in 1950 and ran a catering truck business for over 30 years. Iovinelli has five children, 16 grandchildren and one great-grandchild. His wife passed away several years ago and he remains active with the local senior citizen group in addition to helping out with his son’s business.