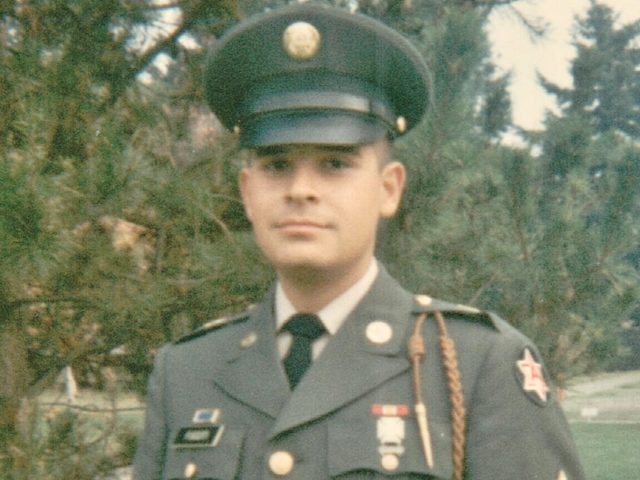 Choosing to become a cannoneer rather than a medic, Robert Fuggiti spent his tour of duty in Vietnam providing artillery support for American troops on the ground.

Bob Fuggiti was born in Chicago and lived in the Cabrini Green area. His family moved to the Old Town neighborhood when he was 3 years old. Fuggiti’s father, Dino, worked as an electrician for the CTA, and his mother, Adeline, was employed as a nurse’s aide and a Spanish language interpreter. His paternal grandparents, who emigrated from the Lucca area of Italy, had two apartment buildings where the family settled. Fuggiti and his younger sister grew up surrounded by grandparents, aunts, uncles and cousins. “It was great,” Fuggiti says. “You always had friends, even if they were cousins.”

He graduated from St. Michael’s Grade School and High School and was working for an insurance company when he was drafted into the U.S. Army in February 1966. His parents were devastated. “My grandmother, Oh God, you talk about the prayers,” says Fuggiti. “I always say that my grandmother’s prayers are what got me through Vietnam.”

Fuggiti completed both basic and advanced training at Fort Lewis, Washington. He was given the choice of artillery or becoming a medic. “In hindsight I should have become a medic,” Fuggiti says, “but I took the artillery.” He was assigned to the 6th Battalion, 32nd Artillery.

At the end of February 1967, he boarded the USS Weigel, a troop transport ship, for a 28-day voyage across the Pacific Ocean. Most of the soldiers were seasick, and Fuggiti stayed out of their way by working in the kitchen and keeping busy to avoid thinking about the war. “I never dwelled upon it,” says Fuggiti.

After a one-day stop in the Philippines, the ship landed in Qui Nhon. Fuggiti’s primary job was cannoneer on the 8-inch Howitzer, preparing the artillery rounds. Though his base was fairly secure, conflicts were close enough to hear small arms fire. After three weeks of fire missions, Fuggiti was transferred to the 1st Battalion, 30th Air Mobile Artillery of the 1st Cavalry Division. The unit, overrun by Viet Cong, suffered casualties and needed replacements.

Fuggiti worked on the 155 Howitzer, the largest gun that could be airlifted, and was promoted to crew chief, setting the sights on guns. He traveled from one fire mission to another either by helicopter, airlifting the 155, or by truck, towing the big guns. “Sometimes we’d spend a few days, sometimes we’d spend a week, sometimes we get up after the one day and go someplace else,” Fuggiti says. “I built more bunkers than I could even remember. You built them, and then you tear them down and you go someplace else.” 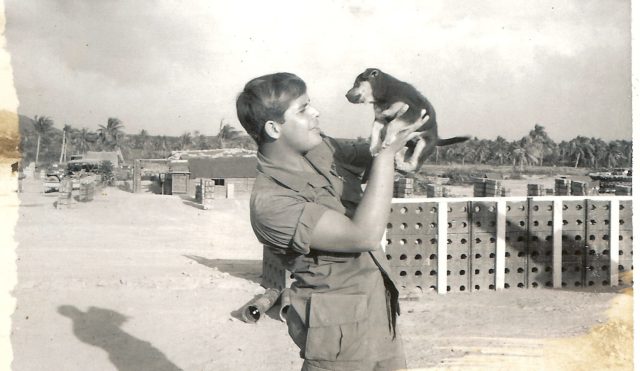 Ground troops went in first, securing the perimeter for the big guns in the inner perimeter. Agent Orange, sprayed to destroy forest cover and food crops used by the North Vietnamese and Viet Cong, was also used to clear the jungle terrain around base perimeters for the artillery. Each gun had a squad of 10 guys plus the sergeant, with four guns in each of the three batteries. “We were support for most of the battles up there,” Fuggiti says.

Sniper rounds flew overhead and mortars whistled as Fuggiti’s crew set up on a mountain. Forward observers called in the coordinates for where to shoot

Fire missions varied, from one hour to four or five hours. “Sometimes it’s harassing fire,” says Fuggiti, “or preparatory fire for ground movement.” One particular battle raged for 26 hours straight. The soldiers took turns manning the howitzer, five men on the gun, while the other five rested.

In one mission, the guns were split up, half going in one direction and half going up to the mountaintop. Suddenly the battle intensified, the soldiers on top of the mountain were in danger of being overrun, and they turned the guns back. Fuggiti believes his grandmother’s prayers saved him during that mission.

In the field, helicopters dropped C rations and water, and the soldiers slept on the ground. They built sandbag hooches when staying in one place for a while. During the monsoons, the guns sunk deep into the mud and after shooting a few rounds they had to be dug out and moved forward. “So we spent a lot of time in the mud,” says Fuggiti. “It was just nasty all the time.”

At a landing zone in December 1967, the troops were stranded, surrounded by fighting. No aircraft could get through to deliver much-needed food and supplies. “We were out of water; we were actually trying to dig wells to get water,” Fuggiti says. Finally, helicopters dropped supplies. The choppers also transported mortally wounded infantry soldiers from the field and lined them up on the ground, covered. “The tarps kept blowing off these poor guys; it was terrible seeing it,” says Fuggiti. “I always think about that.”

In January 1968, the beginning of the TET Offensive, Fuggiti moved to the airport barracks, waiting for his rotation back to the States. One day, the loudspeaker blared the names of those to be on the next flight. He was called as standby. Fuggiti quickly packed his duffel bag, ready to go. The plane came in, some of the guys did not show up and Fuggiti boarded as a replacement. “Then I got on the plane, and it was once again the prayers of my grandmother,” he says, “because that was the last plane that was flying out for awhile.” After a long nap, he woke up to land in Anchorage, Alaska. “On that day, the warmth of being home in the USA was more powerful than the weather’s cold,” Fuggiti says.

Fuggiti was discharged in January 1968 as an E-4 corporal, and his parents met him at the airport. “It’s just stuck in my mind. I could picture the joy of the moment like it was yesterday,” he says. He is retired from a 32-year career with the Chicago Police Department, the last 22 years as detective. He and his wife, Linda, have two children and four granddaughters. With the help of the GI Bill and the State of Illinois Veterans Scholarship, Fuggiti graduated from Northeastern University with bachelor’s degrees in art and computer science. Fuggiti has heart disease attributable to Agent Orange and is recovering from heart surgery.

Reflecting on those fire missions 50 years ago, Fuggiti remembers he did not have time to worry only react. “I’m sure that’s true for everyone else out there in the battle … thinking about keeping their head down and throwing rounds out there. Then when it stops, everything kind of kicks in, the nervousness, the fatigue. The adrenalin is flowing and all of a sudden it stops.”