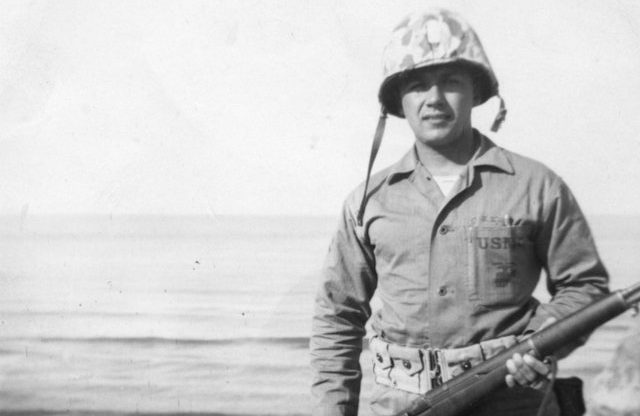 Charles Ippolito was set to ship off to Korea when he was assigned to a newly re-activated Marine Division that saw extensive combat in the Pacific during World War II.

The third of four children, Charles “Muzzy” Ippolito was born in 1931 in his parents’ home at 13th and Paulina. Calogero and Maria (D’Angelo) Ippolito emigrated from Sicily after they were married in 1927.

The family spoke only Sicilian and Ippolito did not learn English until he went to school. The neighborhood was largely Italian along with a mix of other ethnicities. The older boys would grab the little guys in horseplay, throw them to the ground and give them a baldy sour with hair clippers. Mussolini was in power at the time and young Ippolito, speaking only Italian and with a shaved head looked like a little Il Duce. The guys all started calling him “Muzzy” and the nickname stuck! “Nowadays, they’d call you a bully,” Ippolito says. “They’d slap you around in those days. It was nothing.”

Ippolito attended Gladstone Grade School and Crane Tech and was employed by Admiral Corp. when he was drafted in October 1951 during the Korean War. The recruiter needed Marines and asked, “Who wants to volunteer?” Ippolito raised his hand. 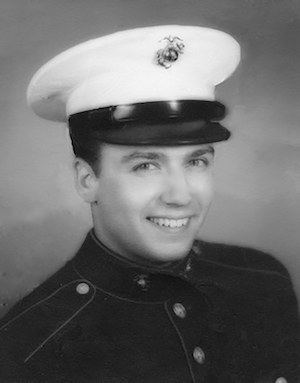 Ippolito completed 10 weeks of Boot Camp at the Marine Corps Recruitment Depot in San Diego and then went to Camp Pendleton for Advanced Infantry Training. The majority of the Marines that Ippolito trained with deployed to Korea and he was prepared to go, too. However, the Third Marine Division — which was formed during World War II, saw action in the Pacific and was disbanded after the war —was reactivated on January 7, 1952. Ippolito was chosen to be a part of the reactivation.

Based at Camp Pendleton, the division began intensive combat training, including new tactics and maneuvers. The Marines participated in extensive exercises and training, including amphibious invasions, helicopter landings, airborne operations and attack, and defense against atomic weapons and missiles.

Ippolito was a corporal in charge of 10 men in the Ration Platoon, which supplied food for troops in the field. Their job was to bring food into the combat area, locate a safe place to set up and then build a compound (structure) to keep all the supplies secure.

Training for amphibious landings, the men sailed in convoys at sea for a month at a time. Over 120 ships carried troops, artillery, ammo, machinery, vehicles and food — everything necessary for an invasion.

Ippolito recalls the practice landings in the rough seas. “Guys were sick all over as they came down the nets,” he says. “I can’t believe how these guys in WWII came down, so sick before they hit the beach. It was unbelievable what those guys went through.”

The base at 29 Palms, Calif., was reopened and Ippolito’s contingent was the first to occupy it since it closed after WWII. “It was desolate.” Ippolito says. “A good training place for shooting artillery. It could handle 155 artillery, shoot for 20-30 miles and not hit anything.”

When not on training exercises on islands or at 29 Palms, Ippolito stayed at Camp Pendleton, going on patrols and taking part in maneuvers. The men lived in 4-story barracks housing over 100 soldiers. The workday ended at 5 with evenings and weekends free, except for rotational guard duty. Ippolito usually stayed on base while off duty. “I didn’t have money,” he says. “Pay was about $78 a month.”

Ippolito was discharged in October 1953 and returned home to Chicago. Luckily, he did not see combat. “You can only appreciate that you did what you did,” he says. The real heroes, he feels, were four of his childhood buddies: guys who all hung out on the street corner together and who weren’t as lucky.

Cpl. Sirio Ricci was a machine gunner with the Marines in Korea. There were three hills named Carson, Reno and Vegas because they were such a gamble to keep. On March 29, 1953, Ricci was engaged in battle on Vegas Hill. He was walking up and down, checking that his men were dug in when he was hit and killed by a mortar. Ricci was awarded the Silver Star. “He was at the wrong place at the wrong time,” laments Ippolito. The Corpsman who notified Ippolito about Ricci’s death wrote, “They killed so many of them, they looked like dead logs out there.”

Pfc. Johnny Puccini, was a forward observer in the Army. He also took on the added duty of stretcher-bearer because one of his buddies just could not handle the job. His unit was overcome by North Koreans and he was almost killed as they shot into a hut he was in before being rescued by South Korean troops. Puccini was awarded the Bronze Star.

Sgt. Joe Capizzano served in Special Services with the Marines. In November 1950, he was with the infantry in North Korea, close to the Chosin Reservoir. The end of the Korean War appeared near when suddenly, hundreds of thousands of Communist Chinese soldiers poured into Korea. Ippolito says, “They came over like flies and they overran them.” The Americans and their allies were forced to retreat in a strategic withdrawal.

Marine Pfc. Chris Mennella was on patrol in Korea when he stepped on a landmine that blew his calf off. Ippolito and Mennella were in advanced training together, and by the luck of the draw, Mennella deployed to Korea and Ippolito stayed back. Mennella recuperated at Coronado Naval Hospital near Camp Pendleton and Ippolito visited him on Sundays. “I used to push him in the wheelchair,” remembers Ippolito. Mennella was awarded the Purple Heart.

“I felt terrible!” Ippolito says, when he learned Ricci was killed. “He was like a brother. You feel guilty. I always question myself, how would you be, fight or flight? You don’t know.”

Ippolito married his wife, Helen, in November 1953 and they have three children and eight grandchildren. His son, Chuck, was a corporal in the Marines as crew chief on the F-4 Phantom jet fighter/bomber. Ippolito is retired from Illinois Bell where he was employed for over 33 years as a telephone repairman.

“I love the U.S. Marines Corp.,” Ippolito says, “and would not take any amount of money in exchange for my experience and what it meant for the rest of my life.”

He remembers Ricci’s mother crying, “How come all the boys come home, but not my son?” Ippolito softly recalls her saying. “How do you answer that?”