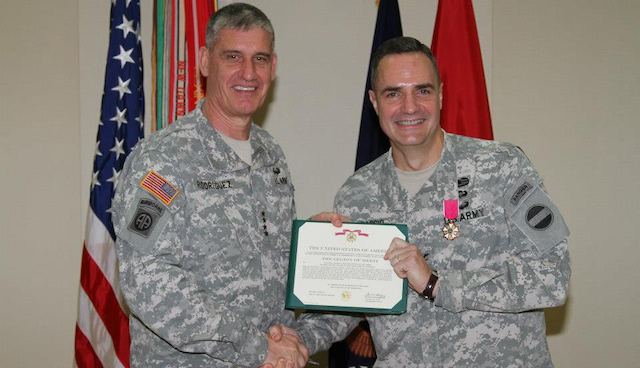 Baggio receives a Legion of Merit Award at his retirement party.

As a media specialist for 12 of his 33 years in the Army, Daniel Baggio regularly put himself in harm’s way to spotlight the positive impact the American military has around the world.

The oldest of two sons, Daniel L. Baggio was born in Rockford, Illinois, to Giordano and Beverly (Kemper) Baggio. The family lived in the city’s South Side Italian neighborhood surrounded by grandparents, aunts, uncles and cousins. Baggio’s paternal grandparents immigrated from Sarcedo. “Every Sunday, we went to my nonna’s house, and I will say it to this day: She was the best cook that ever lived.” His grandfather made wine, and the kids mixed it with 7UP. “My nonno always used to call it cherry pop,” Baggio recalls. He attended Cherry Valley Grade School, Marsh Middle School and Guilford High School.

“We’ve had a great tradition in our family of serving our country,” Baggio says. His grandfather Benvenuto fought in the Italo-Turkish War with the Italian Cavalry 1st Regiment Nizza. Both his uncle Armando and his father served in the Korean War, and a cousin fought in Vietnam. So when the ROTC Drill Team performed at a school assembly, spinning their rifles, Baggio was interested. “I thought, ‘That’s cool,’” he says. “‘I want to do that.’” He joined the JROTC program at Guilford and participated for three years until he transferred to Rockford Lutheran High School because Guilford had dropped its sports program. He graduated in 1977 and attended the University of Wisconsin-Whitewater.

Baggio enrolled in the Simultaneous Membership Program, which allows a person to enlist in the National Guard and participate in ROTC while attending college. Upon hearing this, his father said, “You know, your grandfather would be proud to have an officer in the family.” Baggio graduated with a degree in physical education and a commission as Lieutenant. He went into the regular Army, attending Infantry Officer School at Ft. Benning, Georgia, after which he was stationed with the Old Guard in Washington, D.C. Baggio took part in ceremonies such as parades, cordons at the Pentagon and White House, and funerals during which he marched in with the casket and presented the flag to the family.

Baggio’s military career spanned 33 years, including 30 years of active duty and 11 years spent overseas in command and staff positions. He completed three tours of duty in Korea with the 1st Battalion, 5th Infantry, beginning in late 1987, with two in the Demilitarized Zone (DMZ). He served as Personnel Officer, Deputy Operations Officer and Commander of Charlie Company. Baggio was first stationed at Camp Howze, a small base on the main attack route between North and South Korea, six miles from the border. “We were kind of danger-close where we were,” Baggio says. Duties rotated between manning various guard posts and patrolling the area. Maneuvers, including quick-reaction training, were part of the rotation cycle. “It was some of the most intense, best training in the Army,” he says. Missions alternated between employing Army Ranger tactics while patrolling the DMZ and conducting realistic training.

“The DMZ is an eerie place,” Baggio says. “The north side, they’re playing all this music, propaganda and stuff in Korean, and it’s the weirdest thing.” In 1994, Baggio was stationed at Camp Casey with the 1st Battalion, 503rd Infantry Regiment (Air Assault) as Operations Officer (S3).

During the Kosovo Campaign with the NATO force, Baggio traveled through war-torn Kosovo, Albania, Macedonia and the Balkans. “Basically, a humanitarian mission helping out the refugees in that theater of operations,” he says.

Back at Ft. Hood, Baggio was considering transitioning out of the military when 9/11 happened. “That really changed my life a lot; I ended up staying in the Army another 12 years,” he says. Along with being an Infantry Officer, Baggio’s secondary MOS (Military Occupation Specialty) was media relations. “There were some wonderful things that our soldiers did, and the ability to tell that story was important to me,” he says. Baggio deployed to Iraq with the Third Armored Corps and became the Multinational Corps Public Affairs Officer. “We did a lot of media in the battlefields, trying to get people to tell our soldiers’ stories,” Baggio says. “That’s when I became a good friend of Geraldo Rivera. I spent a lot of time with him actually on the battlefield.”

Many reporters never left their hotel rooms, going up on the roof only after explosions to tell their stories. They didn’t see and report all the positive work the soldiers were doing for the Iraqi people, like rebuilding roads and schools and helping the children. “What used to irritate me, you’d see on the media where they’d say, ‘Well, these soldiers beat down a door, and all these innocent Iraqis are in terror.’ All they’re telling is the one side of the story,” he says.

Geraldo was different. He told Baggio, “I can’t wait! Can we get out there?” The pair went on foot patrols and drove in Strykers (wheeled armored vehicles) in Mosul. They were shot at, but the armor prevented the RPG (Rocket Propelled Grenade) from piercing the vehicle. Safe inside, they just felt the vehicle shake. “Pretty exciting stuff, actually,” Baggio says. “These insurgents didn’t want to see progress, didn’t want to see the Americans succeed. They wanted unrest over there.”

In Saba Al Bor, they spent the night atop the police station with snipers. As dawn broke, Iraqi forces shot mortars, and dirt from the retaining wall hit Baggio and Rivera. Geraldo exclaimed, “Hey, what the hell?” as mortar fire came in hard and fast. “I almost literally tackled him,” Baggio recalls. “These things were coming in twos and threes.”

Baggio was at the Press Information Center in Baghdad when rockets hit. He ran around, calling out names and checking that everyone was in the bunker. “Once everybody was accounted for, I went down there and joined them,” Baggio says. “That was one of those moments where my training kicked in, and I did what I had to do,” he says. “It’s later on you sit down and reflect, ‘Oh my God, you were actually shot at.”

Other overseas assignments included Japan, Turkey and Belgium. In Japan, Baggio was with Joint Force Headquarters, U.S. Forces Japan, working in the Combat Exercises Division. Baggio was next stationed in Turkey, again in charge of the Combat Exercises Division. In Belgium, Baggio was stationed at SHAPE (Supreme Headquarters Allied Powers Europe), the military arm of NATO. “It was totally a joint and multinational environment,” he says.

Returning to the States in 2006, Baggio served as the Chief of Public Affairs for the U.S. Army. Posts included the Pentagon, the Military District of Washington and U.S. Army Forces Command in Ft. McPherson, Georgia. He retired from Ft. Bragg, North Carolina, as Colonel in 2013.

He and his wife, Jina, have three sons. Baggio is now the Executive Director of Military Instruction for Chicago Public Schools. As the chief administrator and instructional leader, he is responsible for resourcing and leading 45 JROTC programs in high schools across Chicago.

Having been stationed around the world, Baggio says, “I wish people would appreciate what a great country [America] is. We have the best-trained military in the world because we can execute our missions in the most arduous situations.”