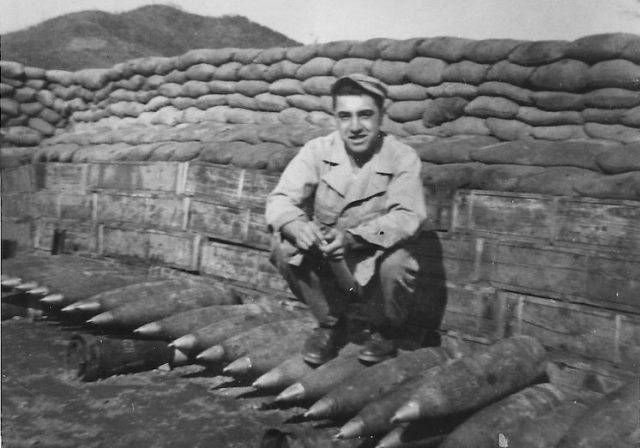 As a corporal in Korea, Edward DePasque readied howitzer shells for loading, shot flares to guide troop movement at night and even did a stint as a cook.

Edward DePasque was born in his parents’ home on 36th and Francisco in Chicago. He was one of nine children; two died as infants. His mother, Victoria Marino, was from Salerno and his father, Giovanni, from the Abruzzi region of Italy.

DePasque’s parents grew a vegetable garden to keep their large family fed, using free tomato plants provided by the Campbell Soup Company. The close-knit family worked in the garden, jarring tomato sauce and making their own sausage, pasta and ravioli. “In those days we would go out and pick dandelions and make dandelion wine out of the flowers,” DePasque recalls. They also made barrels of red wine. At the young age of 6, DePasque’s job was to push down the fermenting grapes as they rose to the top.

DePasque attended Burroughs Grade School and Kelly High School, and worked for the railroad until he was drafted into the Army, reporting for active duty in October 1951. “I don’t think my mother was too happy about it, but I figured, it’s a job,” he explains. “They call you and your duty is to go help your country.”

He completed 16 weeks of basic maneuvers at Camp Chaffee, Ark., specializing in artillery and becoming a fire direction specialist. After a short furlough, DePasque boarded a Liberty ship in Seattle and headed across the Pacific.

The voyage to Pusan, Korea, took eight days, with DePasque working KP duty because “I heard I would get plenty to eat.” Recalling the mood and the camaraderie on the ship, he says, “People in those days were willing to go and if you were called for duty to fight, you didn’t put up a fuss about it.”

DePasque was part of the 999th Field Artillery Battalion, based near the 38th Parallel. His unit had 18 155mm self-propelled howitzers, each typically having an eight-man crew. The powerful guns were capable of shooting a 95-pound shell 12 miles. Fuses were put on shells according to the different operations. If they were targeting troops coming up a hill, a particular fuse was put on so the shell exploded above the troops, raining down shrapnel. Cpl. DePasque’s job was to ready the shells to load into the breech of the cannon. 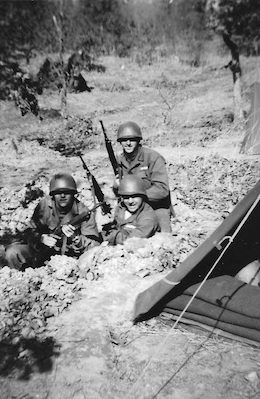 Forward observers searched for the enemy and relayed the target information to the guns. Most often, DePasque’s unit covered the Marines, who preferred to make night raids. DePasque shot flares, carried by parachutes, over or under the target, depending on the wind, to light the way for the foot soldiers. He recalls a frigid New Year’s Eve, when the wind blew the flares back over their position, lighting up the sky. Luckily, the enemy did not see them. “We froze half to death,” DePasque chuckles, “but they did not shoot.”

DePasque’s unit moved between the front, middle and rear positions, depending on the need, but were usually three to four miles behind the front lines. Sometimes fighting persisted around the clock if the North Koreans and Chinese were making a big push. “You didn’t want the enemy to know where you were, so when you did shoot, you had to get rid of them so they wouldn’t shoot back at you,” according to DePasque.

Occasionally there was a lull in fighting, but the soldiers were always ready. “We were called upon because we could move out so fast,” DePasque says. “We could go to another position or we could strike the enemy.” He saw many wounded soldiers and too many deaths. “You feel bad,” he says. “Who’s next?”

DePasque carried a .30-caliber carbine. “That saved your life,” he says. “Sometimes the enemy broke through the lines. They’re out to kill you. They blew their bugles and we knew they were coming, but the Marines generally fought them off.”

The snowy, mountainous terrain was treacherous, with temperatures often falling below zero. “It was rough … a rough country,” he recalls. In the forward position, he was too busy to think about the cold. When they could, the soldiers took turns resting. “You would wrap yourself in a sleeping bag and crawl under a tank sometimes and that’s where you sleep,” he says.

Even worse were the torrential rains that lasted for a week or more. The tank engines were always running and sometimes the soldiers stood on top to dry off from the engine’s warmth. “You’re constantly wet and you always had to take care of your feet,” he explains. “You would wring out your socks and put them on your body to dry them out.”

DePasque manned the big guns for three months before becoming a cook. He told the mess sergeant, “Hey Sarge, you’re always complaining about the cooks, make me a cook.” When asked if he could cook, DePasque replied, “Yea, I’m from a good Italian family, we had to learn how to cook.”

The cooks prepared three meals a day for 150 soldiers, wherever they were. If they were in the front position, food was brought up to them. If they were there for several days, DePasque brought the kitchen up. The kitchen moved often, according to need, and could be loaded up and on its way 25 minutes after getting the call. Breakfast was usually bacon, eggs and toast, and always coffee. Lunch and dinner meals included chicken or turkey and, DePasque recalls, “We had a lot of hamburger meat.”

Food came up from Seoul every day. If the truck couldn’t make it, they ate K rations. “We never let a guy go hungry,” says DePasque. The 30-gallon pot of “cowboy coffee” constantly brewed. The water was kept boiling and grounds were continuously added. Occasionally they even had ice cream. “Summertime, you wouldn’t get it,” says DePasque, “because they used all the ice for the bodies of the Marines to preserve them.”

When in the rear position, DePasque received care packages from home that included salami and cheese. “I would invite all the Italian guys and make pizza,” he says. “Everybody’s your friend when you’re the cook.” The soldiers bought beer from the PX to go with the pizza. “You gotta have some pleasure,” DePasque notes.

After one year in Korea, DePasque completed his service at an Army base in Joplin, Mo., and returned to Chicago when he was discharged in 1953. He married in 1955 and has two daughters and three grandchildren.

A widower since 1990, DePasque is retired from a sheet metal career, enjoys traveling around the country and spending time at his cabin in Colorado, and remains active with the American Legion. His daughters live nearby and they all continue the family tradition of making homemade Italian sausage and pasta dishes.

Last fall, DePasque made the Honor Flight to Washington, D.C., and would recommend it to any veteran. “They really take care of you,” he says.

Reflecting on his time in Korea, DePasque says, “It was an honor to serve our country.”