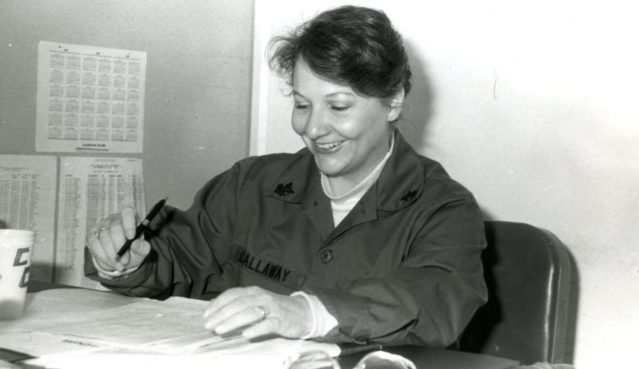 Opting for the Navy instead of college, Georgiann Callaway found professional fulfillment and adventure on six continents during a stellar 20-year career.

Georgiann “Gigi” Callaway was born in Chicago and grew up in LaGrange Park, one of four girls born to Andrew and Ann (Beres) DiDonato. Her father’s family was from Calabria.

Callaway enjoyed a close relationship with her paternal grandparents, who lived in the Little Italy around Taylor Street. “It was Sunday at my grandparents’ house,” says Callaway. Aunts, uncles and cousins gathered together for pasta. A cherished memory is making ravioli with her grandmother.

Callaway attended Forest Road Grade School and graduated from Lyons Township High School. Her parents owned a restaurant and encouraged her to go to college, but Callaway, undecided about her future, did not want to waste their hard-earned money on tuition. “I think I’m going to take a year off and work,” she told them. Callaway found a job downtown working at a garment company. During the week she lived with her grandparents and, depending on her plans, went home on Fridays to spend the weekend with her parents. A year later while having lunch at the family restaurant her mother said, “It’s time to apply to go to school.” Callaway replied, “Well, I’ve been thinking about joining the military.” Her mother stood up, “gave that wave that mother’s always give” and said, “You’re all talk!”

Six of seven uncles had served in the military in World War II and Korea. Callaway remembers looking at their pictures and asking her mother questions about what they did during the war. She was intrigued with their experiences. “I was the type of kid that any patriotic movie or song came on, it just pulled at my heartstring,” she says.

The next day, 19-year-old Callaway went to the recruiter’s office downtown, not sure which branch she wanted to enlist in. The uniforms were all on display and she had to make a decision. “I looked at what was the prettiest uniform,” she says. Callaway spotted a “gorgeous powder blue seersucker suit,” saw it was Navy and immediately joined for four years. Her mother and grandmother urged her not to tell her father and grandfather. Friday evening came around and as usual her grandfather asked, “Is Gigi coming for dinner?” Her grandmother replied, “Tony, I have to tell you something.” About the same time her father asked her mother, “Ann, is Gigi coming?” Her grandfather upon hearing that Callaway joined the Navy immediately phoned her father, who yelled, “What! She did what!?” By that time, Callaway was on a plane to Orlando for basic training. “Knowing my father or grandfather, they would have gone to O’Hare and tried to talk me out of it,” she says.

Callaway graduated from training school and was assigned to Midway Island working for the Judge Advocate General’s Corps (JAG) officer on base. During her 18 months there, Callaway became a scuba diver and voluntarily assisting scientists in defining different species.

An avid diver, she applied for Explosive Ordnance and Disposal (EOD), a field newly opened to women. Callaway was accepted into the first female class and called home to share the exciting news. Her father asked, “What is EOD? What does that mean?” She explained she would be learning to attach, detach and disarm bombs. “What!” her father yelled. “Please, please … ” “It was more than he could take,” says Callaway.

After talking with her dad and hearing his anguish, she asked for a desk job instead and deployed to Meridian, Mississippi, for Yeoman school. Noticing something special in Callaway, her superiors asked her to “challenge the course.” They felt she could complete the eight-week course in two weeks, and she did. When asked what she wanted to do, Callaway responded, “Something exciting: Joint Chiefs of Staff, NATO, Embassy duty, something exciting like that.” She was assigned to a spot with NATO but first needed to learn French through the Defense Languages Institute. After completing the intensive course, Callaway envisioned going abroad to serve in one of the 13 (at that time) NATO countries. Much to her disappointment, her orders sent her to Norfolk, Virginia.

Callaway was assigned to the Ambassador to International Affairs, working with Ambassador Anderson handling classified information, and found both her work and Anderson to be extremely interesting. Callaway was very young and felt that working for Ambassador Anderson was like having a grandparent on hand at times. “When he needed to be professional, he was very professional, but when he saw that I needed guidance, he would go into that role, which was very, very nice,” Callaway says. While stationed in Virginia, she met and married her husband, Michael Callaway, a Merchant Marine.

She worked with NATO for three years and, looking for an “exciting European assignment,” Callaway decided to stay in the Navy. “I wanted something different,” she says. “It would be a chance to go and see Europe, which I did, both on leave and while working there.” Callaway accepted an offer with the Naval Investigative Service in Rota, Spain. Her job was again classified, working for nearly four years with criminal activity and counter intelligence. “After that tour, I didn’t want to know what I knew anymore, so to speak,” Callaway says. She asked to get out of that field into a new rating called Navy Counselor.

Callaway attended school in Pensacola, Florida, for recruiting, part of the Navy Counselor rotation. The only female in the class, Callaway was the top recruiter. During her three-year stint, headquartered in Columbia, South Carolina, Callaway’s territory included the southeastern part of the state plus northeastern Georgia. Her son, Jonathan, was born while Callaway was stationed in South Carolina.

Next in rotation was the Family Service Center in Charleston, South Carolina. Callaway assisted deploying sailors with any issues they or their families might have. “We did briefings on deployments and what services were available for families and deploying units,” Callaway says. “I loved that job.”

Eight months later, it was decided that Navy Counselors would no longer be part of Family Service Center. Callaway was transferred to Mine Squadron 2, the only female assigned to that staff. “It was not a pleasant time,” she says, “probably one of my least favorite tours.” Fortunately for Callaway, her shore tour was almost over and it was time to go to a deploying unit.

When her detailer (a person in charge of assigning Navy personnel to various commands) told her, “You can go wherever you want to go.” Callaway replied, “Anywhere south sounds fine to me.” He said, “Okay that’s a deal.” She was transferred to Point Mugu, California, and deployed south to Antarctica where she had four tours of duty, spending five to six months at a time at McMurdo Station with the National Science Foundation and detachments in Christchurch, New Zealand and Williams Field, Antarctica.

As Navy Counselor, Callaway negotiated orders for anyone in her unit. Navy personnel talked to her about continuing in or changing their career, or where to go in their next rotation. If someone had a problem with their job, they came and talked to Callaway. She compared her job to that of a school counselor. Negotiating orders over the Antarctic satellite phone system was very difficult and phone time was precious. Callaway had an arrangement with her Commanding Officer, a pilot, to use his call time when he was flying. She phoned Washington, D.C., speaking with detailers to find the best duty for her charges and stressing that they shouldn’t hang up, but transfer the call if and when she needed to speak with a different detailer. 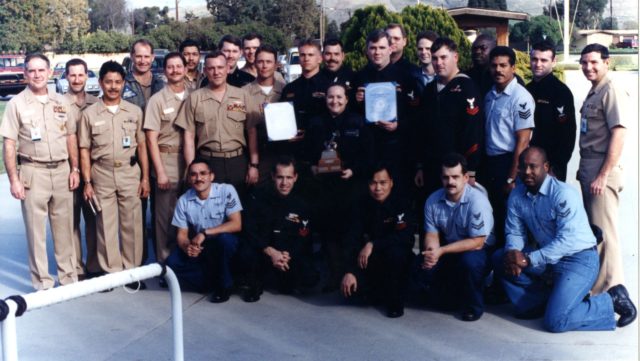 At the Golden Anchor awards ceremony

Needing to communicate with all military personnel at Christchurch, McMurdo Station and Williams Field to keep them aware of various policies and ongoing events, Callaway began writing a newsletter. To make sure it was read, she printed a sports section showing scores from games played between crews and also included a section about funny things that happened around the detachments. It morphed into a popular periodical Callaway named “The Polar Press,” a publication that everyone looked forward to reading. She found her Antarctica duty to be very interesting. “I enjoyed the exciting part of being somewhere where not a lot of people deployed to,” Callaway says.

She completed her tour at Point Mugu as Base Counselor and won two Golden Anchor Awards for the base. A Golden Anchor is a worldwide competition on retention for recruitment and programs offered to the sailors and their families. Only the absolute best win the prestigious award. Callaway helped Point Mugu win two back-to-back Golden Anchor Awards, a high note to end her 20-year military career. She was discharged in February 1997 as Navy Counselor First Class. Her deployments took her around the world, having lived in or visited six of the seven continents; only South America remains for her to visit. Her most memorable times during her military career were serving for the Ambassador to International Affairs and becoming the founder and first editor of “The Polar Press.”

Callaway returned to the Chicago area and began a second career in Human Resources from which she is now retired. She is a member of various organizations, including Sovereign Military Order of the Temple of Jerusalem, DAV and NRA. A longtime member of the American Legion, Callaway is proud to serve as the American Legion Fifth District Judge Advocate and the American Legion First Division Commander for the state of Illinois. She also currently serves as the Director of State Echelon 8 of Twenty and Four, the Honor Society of Women Legionnaires.

The Navy gave Callaway the excitement she was looking for. “Funny, I was working with scientists at the beginning of my career and around birds (Laysan albatross), and at the end of my career, I’m with the National Science Foundation and a different type of birds (emperor penguin),” Callaway says.

“I think that everybody should serve,” Callaway says. “If you really, truly want to find out what America is, live in a different country. Live outside the U.S. for more than two weeks. You have an appreciation for who we are and the liberties that we truly have.”