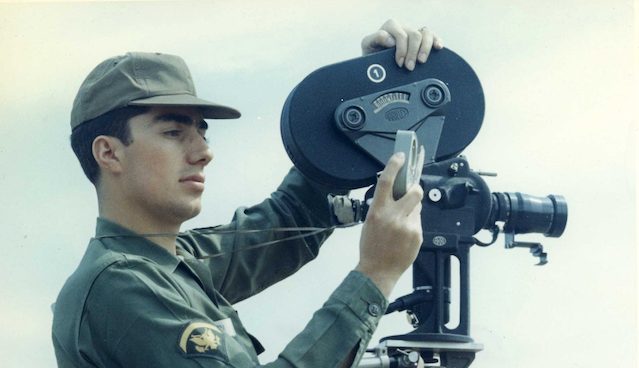 Born in Italy and trained by the Army as a cameraman, Gino Bartucci toured the American during the Vietnam War photographing atomic bombs, filming bombers flying overhead and helping create documentaries.

Gino Bartucci was born in Malvitani di Rende, a small village in Calabria. Of the nine children born to Vincenzo and Maria Carmella (Pisello) Bartucci, six survived infancy. The family farm provided almost everything they needed. “We didn’t have to buy anything but salt, sugar … that’s about it,” Bartucci says. He attended a one-room school with about a dozen students.

In 1955, Bartucci’s father immigrated to Chicago, bringing one son and his only daughter. The three lived with Bartucci’s uncle while they earned enough money to bring over the rest of the family. In December 1958, Bartucci arrived in America at the age of 11 with his mother and brother. He remembers the train to Chicago. “It was cold and we were afraid, not knowing where we were going, even though we were excited about seeing my sister, my brother and my father,” Bartucci says.

They lived on Polk and Pulaski, and Bartucci attended Presentation Catholic School. He worked an early morning paper route to earn money. When Bartucci was 12, the family bought a house in Norridge. He completed grammar school at St. Monica’s and attended Ridgewood High School, which had a large Italian population. Passionate about his Italian heritage from an early age, Bartucci persuaded his French teacher, who also spoke Italian, to teach the language to interested students. He gathered about 20 students into a voluntary study group, and, in so doing, improved his English as well as his Italian.

After graduating from Ridgewood in 1964, he worked part time at a grocery store. The youngest of his siblings, Bartucci wanted to be more independent, so he spoke with an Army recruiter about his interest in filmmaking. He joined in 1965. “I felt like I had to be my own person and experience life,” he says.

Bartucci completed basic training at Fort Knox, Kentucky, and transferred to Fort Monmouth, New Jersey, which was surrounded by a large Italian-American population. He was learning filmmaking at the Army’s School of Photography when an Italian professor who had taken him under his wing advised, “You have potential; don’t fool around.” Bartucci graduated in the top five of his class and was stationed in Long Island City, New York.

The Army had purchased Paramount Studio, and though the government gave orders regarding filmmaking, most of the employees were civilians. Movie production became a joint effort between military and civilian personnel. Bartucci lived in a three-story barrack across from the studio, once again in an Italian neighborhood. Despite graduating at the top of his class, he found himself in the studio basement, cleaning and maintaining cameras while dreaming about making movies. An Italian captain befriended him, and Bartucci confided, “I want to get out of here.” The officer returned the next day and told Bartucci about an opening at the atomic bomb testing site outside of Las Vegas. “Another Italian helping an Italian,” Bartucci says.

Bartucci trained in motion picture filming, not still photography, but he took classes in the latter “because I needed to get out of that basement,” he says. Bartucci served as an official photographer for the atomic bomb tests.

Before filming, Bartucci entered a portable containment area, undressed and donned protective gear. “Like going to the moon,” he says. Then he went into the hills and took photos of live, undetonated bombs just a few feet away from him. Seeing the cylinder for the first time, he thought, “It’s going to explode, I’m dead. Oh my God, how did I get myself into this?”

Bartucci took the photos, after which the commanding officer removed the film and handed the camera back to him. “Since it’s theirs, I just left everything, undressed, cleaned up, took a shower and then went on my way,” Bartucci says. “I don’t know what becomes of it.”

He was stationed there for three months before returning to Paramount Studio. After that, Bartucci traveled to Army bases for various jobs. He filmed military planes and tanks in action, allowing government officials in Washington to see them at work before signing a purchase contract. “In other words, we had to be their eyes,” he says.

Bartucci filmed as airplanes came through the clouds and whisked along the treetops as if they were going to drop bombs. Other times he filmed planes simulating an invasion. He also filmed a tank on a landing strip made to look like a beach in Normandy. “They just tell you that’s what you have to do,” Bartucci says. “They don’t tell you the purpose or who wants it.”

At Fort Benning, Georgia, a helicopter dropped Bartucci onto a hilltop with a tripod and camera gear to film incoming planes. Adrenalin pulsed through his body as he set up the tripod. “What if they don’t come back and pick me up?” he thought. He loaded the film, taking care not to expose it. Bartucci checked the camera several times, making sure everything was good. Suddenly he heard the roar of the planes. “Oh, what am I gonna do? I better get ready,” he thought. As he placed the camera on the tripod, it sunk into the muddy ground. “My heart was unbelievable,” he says. Bartucci quickly hoisted the camera onto his shoulder and filmed for about 15 minutes. He later learned he was given a standing ovation at the movie’s screening. “Everybody commented that they had never seen a pan as smooth as that,” he was told. “I think God was looking out for me.”

Bartucci also helped create military training films and documentaries. Among the actors he worked with were Eva Gabor and Johnny Crawford, an Army sergeant and Bartucci’s roommate. He filmed the promotional documentary “A Nation Builds Under Fire” with John Wayne.

He had some close calls during aerial photography. Filming from inside a helicopter that was bouncing its way through the air, his seat belt came undone, and he tilted toward the door. “They had to pull me in,” Bartucci says. “That was scary.” During an incident inside a small plane, Bartucci had just moved for a better view when the door flew open. “I said, ‘My God, it’s a good thing I just changed my seat!’” he says.

Specialist 5 Bartucci was discharged in 1968 and returned to Chicago. With his lifelong passion for the Italian community and culture, Bartucci built Piazza Italia on the 3400 block of North Harlem Avenue in 1979. The building now houses Pasta Fresh and BarTucci. Across the street are two gift shops: La Bomboniera (Italy’s Gifts) and La Galleria D’Arte Giuseppe Armani. Bartucci and his family are involved with all of these businesses. He is the founder of the Italian American Business Association of Harlem. He has four children and seven grandchildren.

Summing up his Army years, Bartucci says, “It was the best experience I have had in my life, and I feel it would be great for everybody to have that experience. It teaches you to respect yourself, respect others and take nothing for granted. It gives you a way of growing up.”