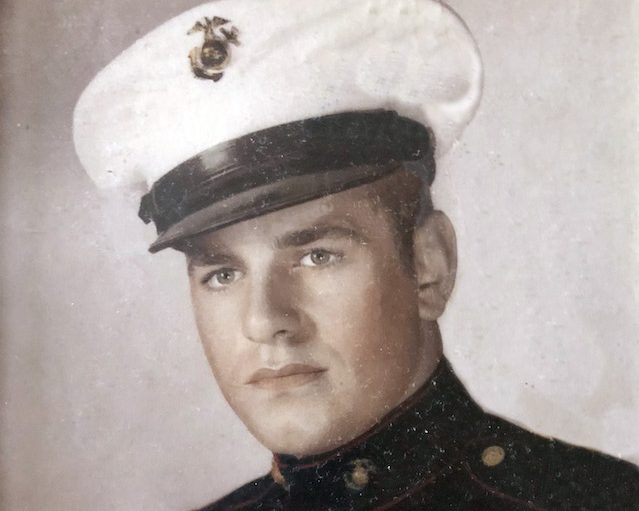 A Marine Guard in Europe after World War II, Joe Priola had the time of his life while serving his country.

This is a war story where no one gets hurt: Goodwill and humor are the weapons of choice.

My first cousin Joe Priola was in the Marines at the tail end of World War II and a bit thereafter. Though 40 years separated us in age, I loved my cousin Joe like a big brother. Joe and his younger brother, Sam, were my dad’s nephews, and my grandparents and father raised them in the ’30s and ’40s. My father taught them to be men of honor and to love their country and their God.

The son of Peter and Agnes (Tinaglia) Priola, Joe grew up in Little Sicily on Chicago’s Near North Side. He loved football and played at Waller High School, now Lincoln Park High. He took me to my first Bears game; I took him to his last.

As the war was effectively over when Joe signed up, he was sent to Europe in a peacekeeping capacity. One of his favorite duties was being a guard at the U.S. Embassy in London. With his great sense of humor, he said he was given the job because he was so darn good looking in those Marine dress blues.

After spending his days all spit-and-polish, watching over the embassy as politicians and generals came and went, Joe had plenty of time for R and R. One story he regaled us with was about the time he and a group of fellow Marines went out on the town with Tyrone Power. Not only was Power a famous actor, but he was also a decorated USMC pilot.

While in England, Joe got it into his head to tell his superior officer he spoke fluent Italian, and if the brass needed an interpreter, he was their guy. Well, much to his surprise, the next day he was departing rainy London for sunny Italy. Knowing only Chicago Sicilian, he bought an English-Italian dictionary and started boning up on the flight.

Before putting his newly acquired skills to the test, he was assigned to work shipboard security. I remember him telling us how he was pulling guard duty on a ship in Naples, and all personnel had to show identification passes before entering a high-security area (HSA). It didn’t matter what their rank was. If they didn’t show their passes, they weren’t allowed through.

According to Joe, there was one 4-star general who left the HSA without his pass. When he came back, the general vehemently argued with Corporal Joe that he had just left the HSA a few moments before. Joe’s orders were to shoot any unauthorized personnel who tried to force their way into the area. Orders were orders, so Joe began to unsnap his holster.

At that moment, a superior officer came by and went crazy. Joe said he got chewed out by the Army general but was commended by his Marine commander for following orders. Joe’s son Steve asked him what would have happened if he had shot the general. Joe replied that he most likely would have been charged a dollar for the bullet and shipped out to Asia.

Then, one day, he was asked to translate. He gulped. Despite his studies, he had not been able to pick up much of the “local lingo,” as he called it. High-ranking Italian officers were coming to visit the U.S. officers on his ship, and evidently the other translators were busy. Fortunately for him, he had a chance to chat with the Italian officers before the larger meeting.

I remember him telling me about the nobility and class the Italian officers exuded and how beautiful their uniforms were. It became quite apparent to both Joe and the Italians that this Chicago Sicilian was, shall we say, a bit lacking in the linguistics department. At one point, one of them chuckled and spoke up: “It is not ‘amunninni;’ it is ‘andiamo,’ my friend.” The kindly officer explained that he’d been to Oxford or Cambridge, and Joe could tell. “He spoke beautiful English,” Joe told me. “Better than mine.” The officers wondered why they needed a translator in the first place. “It’s just like some Americans to think their Italian allies are uneducated,” one of them complained.

Joe figured his cover was blown, and his proverbial goose was cooked. Thinking quickly, he came up with a plan he sold the Italians on, honing his skills as a future top Allstate salesman in the process. The officer would talk to him in very basic Italian with a few words of broken English thrown in for good measure, and Joe would translate to the best of his ability. The officer knew perfectly well what the Americans were saying, so the meeting went amazingly well for all parties.

So how did Joe ice the deal? Was it his innate charm and good looks, or did the officers feel sorry for a Sicilian-American Marine in a tight spot?

Not exactly. Joe was a classic Chicagoan: He knew a guy who knew a guy. He had a knack for making connections and cultivating friendships in key places wherever he went. Joe’s end of the bargain was to give the officers access to supplies that were incredibly hard to come by in impoverished postwar Italy. A deal’s a deal, and both sides made good on their commitments.

The supplies included chocolates, cigarettes and vitamins, as well as pantyhose for the officers’ wives or girlfriends. I think Joe even threw in a few bananas as an extra treat for his new friends. And so a potential international incident was avoided by some quick thinking on the part of my cousin Joe!

As a reward for his good work, Joe was allowed to go on leave to visit Sicily, where he was able to meet his grandparents’ families in Vicari, provincia di Palermo. He vividly recalled how tough the Allied invasion was on the already poor island.

When I visited family there in the early ’80s, they still had Joe’s picture on the wall. Peppinu, as they called him, was the handsome U.S. Marine who broke the hearts of a few young ladies who still hoped he would come back one day. He also might have been the Chicago guy who somehow managed to arrange for the family house to be a Marine Corps alternate supply depot. Then again, who knows? As they say back in the old county, omertà. 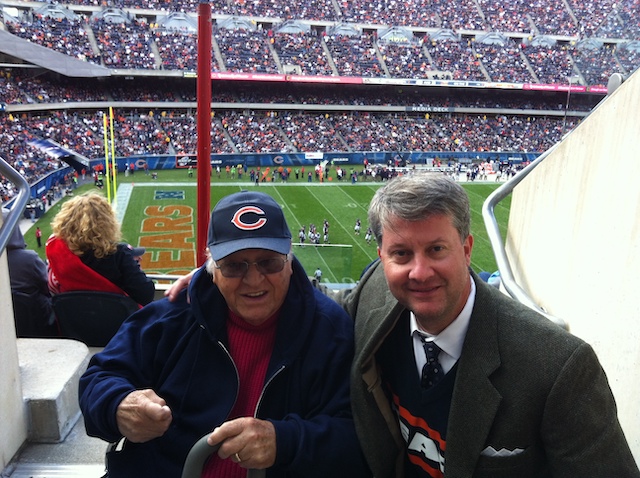 The author attends a Bears game with his beloved cousin

Joe’s younger brother, Sam, became a decorated Marine in the Korean War. I often wonder how our grandfather, Settimo Tinaglia, felt about being declared an enemy alien during World War II, along with hundreds of thousands of other Italian immigrants, when two of his grandsons served their country with honor.

Joe came back to the states and married the lovely Helen Mikul, whom he met at Midwest Bible Church in Chicago. They had four kids, six grandkids and 10 great-grandkids. Joe went home to be with the Lord in 2013, but we all remember his smile, jokes and laughter. Semper fi.