After serving in the Navy for 16 years, mainly in intelligence, John Cervone signed on with the Army, spending another 14 years, principally in communications.

The oldest of three sons, John Cervone was born in Jamaica Heights, a neighborhood in Queens, New York, to Giachino and Benita Russo Cervone. Cervone’s mother was born in Naples, as were his father’s parents. The family moved to the nearby Springfield Gardens neighborhood to be closer to relatives, whom they visited frequently. “I spent a lot of time with both sides,” Cervone says. Holiday meals began with lasagna and meatballs, were followed by ham or turkey, and ended with Italian pastries. Cervone fondly remembers going to Bella Ferrara bakery in Little Italy with his grandfather for the pastries. “As I got older, I used to drive him down there,” he says. Cervone’s mother prepared many delicious meals, “but baked ziti was my favorite,” Cervone says.

Cervone graduated from Christ the King Grade School and Andrew Jackson High School. He attended college for a few weeks, but “it just wasn’t the right fit for me,” Cervone says. He began working as a linesman apprentice at Penn Central Railroad. “This was 1968 and they were drafting everybody, and I was waiting to get drafted,” he says.

Cervone’s father, a World War II Navy veteran who saw action in the Pacific, suggested he enlist in the Navy and go in when he wanted. Cervone joined in January 1968 for four years of active duty and two years of reserves. Soon, he was off to Great Lakes Training Center, Illinois, for boot camp. Cervone was interested in becoming a cook, but based on tests, he was selected to become a Communications Technician (CRYPTO). Cervone went to Corey Field in Pensacola, Florida, for training and worked on top secret information with the National Security Agency. “We weren’t even supposed to be saying what we were doing or what we were learning,” he says. NSA officials visited on a regular basis. “They asked you a million questions,” Cervone says. Friends were also questioned. “They were trying to see if you did something wrong or you could be blackmailed or anything,” Cervone explains. “Blackmail was the big thing they always worried about.”

After graduating in October 1968, Cervone’s first orders were to the USS Bon Homme Richard, an aircraft carrier off the coast of Vietnam. His main duty as part of Communications Security (COMSEC) was radio intercept. His work was top secret, under the NSA. Cervone monitored communications between U.S. troops to make sure they were not mistakenly revealing information, while also monitoring enemy activity. “We could never tell anyone what we did, or we would be penalized severely,” he says.

Cervone was stationed in Vietnam for six months and then received orders to report to Rota, Spain. “I really lucked out,” he says. The naval base was situated in the Costa del Sol region, an area with numerous beaches and resorts. Assigned to a section of 15 men, Cervone continued working in COMSEC. “Even after all these years, I hesitate to tell you,” he says. “But we were monitoring the enemy a lot — the Russians.”

He was stationed in Rota for two years, living on base during the first year and then renting a villa off the Mediterranean with friends. Communications surveillance was continuous. The Navy utilized a system called “watch standing,” which allowed for operations to continue 24 hours a day while also giving each sailor time for rest and other duties. Cervone worked the equivalent of six regular work days in just five and then had 80 hours of free time. He took advantage of this time to explore Spain and travel to Portugal and Italy.

Cervone got along great with the residents in his neighborhood and joined them at parties and barbecues. “They reminded me of Italian people in my family,” Cervone says. “I got along very well with them. In fact, they wanted me to marry their daughter.”

After what Cervone calls “my two years of bliss,” he received orders for Adak Island in the Aleutians, bordered by the Bering Sea to the north and the North Pacific Ocean to the south. “On a clear day, you could see Russia,” he says. Cervone continued working with communications surveillance. He lived on base in an isolated area, and everyone got to know one another very well, sharing childhood memories. “You had to be basically an outgoing person,” says Cervone. “You had to like people and be able to make friends because being up there, there was nothing really.” After being stationed on Adak for one year, he had completed his four years of active duty.

Cervone returned home to New York and began fulfilling his commitment in the Navy Reserves. The two-year stint morphed into 12 years. During this time, Cervone became friendly with the Navy recruiters he met. Meanwhile, he married, had twin boys and was employed in banking. “I thought to myself I would like to try something different,” Cervone says. In 1988, he applied for the position of Navy recruiter, was accepted and, when given the choice of where to be stationed, chose Providence, Rhode Island. Cervone enjoyed the work and was nominated for Recruiter of the Year. He left when his contract expired after two years of active duty and began working with the Federal Deposit Insurance Corporation.

After a series of career changes, Cervone was working in security when he opted to join the Army National Guard in 1995 and train as a Military Police Officer. He served for five years doing crowd control, traffic control and protecting government property. Cervone was recommended to work for the Public Affairs office at National Guard Headquarters and began working as a full-time technician for the Department of Defense in 2000. In this position, he wrote hundreds of magazine and newspaper articles and took pictures pertaining to National Guard activities. “Anything that had to be announced that was going on with the National Guard, I was the guy that had to do it,” Cervone says.

He often accompanied generals as they met with National Guard troops deployed on various duties around the country, writing articles and taking photos along the way. One of his favorite assignments was accompanying General Alfred Gray to the Mexican border. They visited the National Guard troops there to see how they were doing. “I got to see how the border patrol worked,” says Cervone. “It was very interesting.”

After 9/11, National Guard troops were no longer “weekend warriors” and were activated throughout the world. Cervone wrote articles about troops deployed overseas and took photos of them as they left and returned. He longed to be with them so he could capture the feeling. “I kept volunteering to go, but they wouldn’t let me because I was almost 60 years old,” he says. His son, who was also an MP in the National Guard, volunteered to go to Iraq, and Cervone decided to try one more time. “So I volunteered to go with this Public Affairs unit that was going over there, and lo and behold, they took me,” he says.

Cervone trained in Fort Dix, New Jersey, for four months. “It was like going through boot camp all over again,” he says. He was 59 years old at the time, and, coincidentally, his son’s unit was also there undergoing the same training. One night, his son asked, “Dad, how the heck are you doing this?” “I said, ‘Son, I have no idea,’” Cervone says. Every night, he called his wife and said, “They’re killing me. I gotta get outta here.” 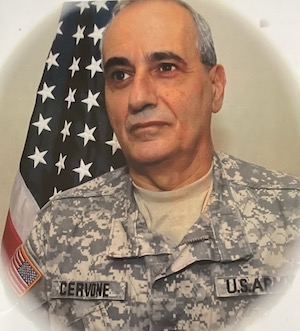 Deployed to Iraq as a combat journalist in August 2007, Cervone was stationed on base in Baghdad with his Public Affairs outfit of 30 men and women. “We were in what was called the Green Zone,” Cervone says. “That’s where all the politicians, all the government workers from the U.S., the big shots were.” The Red Zone, Cervone adds, “is where the bad guys were, which occasionally we had to drive into.”

One of Cervone’s duties was to pick up incoming journalists and diplomats and bring them to the Combined Press Information Center in the Green Zone. If they wanted to be with a particular military unit or go to a particular city, he made all the arrangements and drove them. Cervone escorted such dignitaries as Oliver North, Condoleezza Rice and President Joe Biden.

Another duty was to prepare Iraqi media to go out on a mission. He supplied them with flak jackets and helmets and made sure they arrived at their destinations — and, more importantly, that they returned safely. Cervone traveled wherever he needed to go. “I went pretty far out of the Green Zone into the Red Zone,” he says. “Wherever they needed a photographer or a writer or somebody to escort people. I took pictures of everything — promotions, special award ceremonies.” Whether on base or out in the field, Cervone experienced mortar and rocket attacks on a daily basis.

He was driving in a convoy when an Iraqi police vehicle ahead of him suddenly exploded. “They got hit by an IED and got blown all over the place,” Cervone says. “I actually got knocked out of the car.” Cervone served in Baghdad until May 2008 and was awarded a Combat Patch by General David Petraeus.

Cervone retired from the Army National Guard in December 2009 at the age of 61. His rank was E6 Staff Sergeant. He is married and has two sons and two stepsons. He has written a book about his experience in Iraq, titled “How I Spent My 59th Summer or My Tour of Duty in Iraq.”

Reflecting on his 32 years of military service, Cervone says, “I would definitely do it all over again. To me, it was challenging and educational, and I enjoyed the structure. It was good for me.”