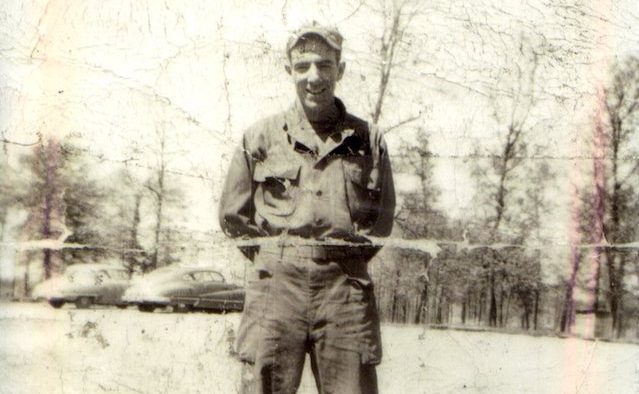 Don’t let the sedate job title fool you. As a combat engineer on the front lines of the Korean War, Joseph Fabiani was constantly under fire.

One of five children, Joseph Fabiani was born in 1929 in Donora, Pennsylvania, to Nazzarino and Laura Settimi Fabiani, and grew up with aunts and uncles living in the area. His parents emigrated from Ascoli Piceno, Italy. His mother, a homemaker, baked bread, made ravioli and even brewed root beer. “She was the best cook!” Fabiani said.

His father, a steel mill worker, died of stomach cancer attributed to mustard gas poisoning suffered while fighting during World War I. Fabiani was 13 years old. A few years later, in 1948, the family moved to Melrose Park, Illinois, to be near his mother’s brother.

Fabiani was employed as a machinist at Chicago Rivet Co. when he was drafted in March 1951. “I expected it because the war was going pretty strong, and a lot of kids were getting drafted,” he said. “I was just waiting for my turn.” He and his identical twin, also drafted, reported to the induction center and were told that because their mother was a widow, only one of them needed to serve. It was up to them to decide which one. “So my brother and I flipped a coin, and six weeks later, I was in the Army,” said Fabiani.

After indoctrination at Fort Sheridan, Fabiani traveled to Fort Leonard Wood, Missouri, for eight weeks of basic training, and then continued on with advance training as a combat engineer. “We learned how to play with explosives and stuff like that,” Fabiani said. “It was very interesting down there.” After a 30-day furlough, Fabiani boarded a train to Fort Lewis, Washington.

Two weeks later, he boarded the USS General H.B. Freeman and headed into the Pacific, encountering stormy weather. They disembarked in Yokohama, Japan, went through a processing center, boarded a troop transport ship in Sasebo, sailed all night and landed in Pusan, Korea. “Oh, I almost started crying,” he said. “This has to be a nightmare. This can’t be true.”

Assigned to Company A, 23rd Infantry, Fabiani served for more than 11 months in Korea. He did everything from building bridges and carrying ammo to the front lines to going on night patrols, guarding a tungsten mine and doing guard duty. A truck brought the soldiers to the ammo dump to pick up supplies. “Then, we would put pack boards on our back,” said Fabiani. “They’d give you four rounds of ammunition or whatever you had to take up there.” The soldiers marched several miles through the mountainous terrain during the night. “When we went up there, they had giant searchlights shooting up into the clouds,” to distract the enemy so they couldn’t see the U.S. soldiers, Fabiani said. “It was scary, I’ll tell you.” They dropped off the ammo and went back down again until the next trip. “You were a human packhorse, a chugga train,” he said.

Fabiani fought alongside the French army on Heartbreak Ridge for five weeks. The North Koreans harassed them with mortar fire three times a day. “I mean, anybody tells you that they’re not scared, they’re telling you a lie,” Fabiani said. When the shells started coming in, everyone looked up and took cover in foxholes while the barrage continued. Shrapnel from an exploding shell hit Fabiani’s right kneecap, but he continued fighting until his outfit was relieved. “I was lucky. You’re laying in the hole, and you hear bang … bang … bang, and you’re just laying there to see where they’re going to hit. That’s got to drive you out of your mind,” Fabiani said. “Scared the hell out of you. Everybody hollers for their mother when you get hit.” He felt sorry for the medics. “They’ve got to get out of their holes whenever somebody’s hurt. They’ve got to get over and fix them up,” said Fabiani. “They’re not allowed to carry rifles or anything, either. All they’ve got is their bag.”

Night patrols were routine, and Fabiani and his squad stalked miles in the darkness before returning. Occasionally, they spent all night in a scouting position, watching for enemy patrols, and they were debriefed in the morning. “You had to tell them what you’d seen,” Fabiani said.

Fabiani’s weapon was a 57 mm recoilless rifle, and his ammo-bearer carried the six rounds of ammo he was issued daily. Fabiani remembered being positioned at the main line of resistance, and his squad leader told him, “Joe, pick your target.” “The thing is, when you shoot this gun off, you have a back blast,” said Fabiani. “So you can’t stay in one area too long because the enemy can see the smoke, and the first thing you know, you get something coming back.”

The Korean people were very poor and lived in huts. “They never wanted money. They wanted socks and clothing and food,” Fabiani said. When not out in the field, Fabiani stayed in the barracks, and a local 7-year-old boy shined his shoes and brought him a pail for shaving. “I’d feed him half of my rations, and I’d give him some apples and oranges to take home to his mother,” said Fabiani. “Boy, they were delighted to get that stuff because they didn’t have anything over there.”

Despite fighting a war, Fabiani had some pleasant times. The U.S. soldiers got along very well with the French troops and traded them candy and cigarettes for wine. “They used to make their own bread. Oh, it was delicious,” Fabiani said. The French had a red powder, which, when mixed with water, made wine. “Wine!” he said. “We had what they didn’t have, and they had what we didn’t have.” Fabiani spent a few days in Osaka for rest and relaxation. “That was a very beautiful place, and I had the best time of my life,” he said. “Beer was 25 cents a quart! Red Label Nippon.”

Fabiani sailed home on the John Pope into San Francisco Bay. “They were throwing flares down at us and confetti and all that, and then when we finally hit the dock, there was a big band over there. ‘Welcome Home’ and all that stuff,” Fabiani said.

Corporal Fabiani was discharged from active duty on Dec. 29, 1952, and went into the reserves. He returned home to Melrose Park and to Chicago Rivet Co., where he worked for more than 30 years.

Fabiani witnessed much sadness in Korea, according to his niece Sandra Donovan, but he was proud of and grateful for his service. “I think every kid should do at least one year in the service, whether he fights or not. You get them off the streets, and you get better habits and all that stuff,” Fabiani said.

Joseph Fabiani passed away on May 4, 2016. The quotes in this article come from an interview conducted and archived by the Melrose Park Library’s Veterans History Project, and are used with the library’s permission. (mpplibrary.org/vhp)