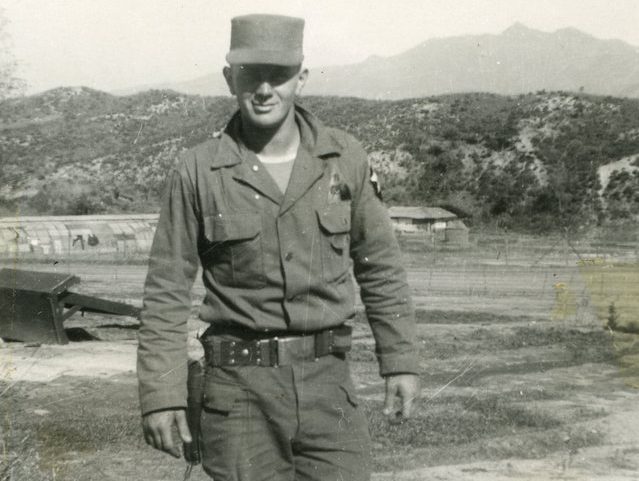 Originally assigned to the Army Finance Branch in Kentucky, Louis Mirabelli soon found himself behind the controls of a tank on the battlefields of Korea.

One of six children, Louis (Lou) Mirabelli was born in Chicago. His parents, Enrico and Mariane (Mirabelli) Mirabelli, emigrated from Cosenza. The growing family moved from apartment to apartment in the vicinity of Taylor Street and Hermitage. “It seemed like every time the people would raise the rent, my father would say, ‘OK, let’s pick up our furniture and move someplace else’ … the old Italian custom,” Mirabelli says.

The Italian neighborhood was a haven for Mirabelli and his brothers, sisters and cousins. Kids played games in the street, and during the warmer months, their parents and paesani sat on the front stoops sharing coffee, cookies, watermelon or whatever they had.

Christmas was always at the Mirabelli house. “There was no question about it; everybody showed up there,” he says. The children, all nine of them, were put into one bedroom. “We had to pretend like we were sleeping because Santa Claus came at midnight, and they’d wake us up,” says Mirabelli. The festivities continued through Christmas Day, and every woman cooked. “They made everything … every kind of cookie,” Mirabelli recalls.

He graduated from Notre Dame Grade School and St. Philip High School, excelling in football. Mirabelli remembers Fr. Moran visiting, blessing the house and leaving with a jug of his father’s homemade wine … for masses, of course! After graduating, Mirabelli worked as a machine serviceman at Elliot Addressing Machine Company. He was drafted into the Army in 1951. “You get a paper, you had to go for a physical,” Mirabelli says. “You’ve been drafted and you went. That’s all.”

He reported to Fort Sheridan for initial processing and then to Fort Knox, Kentucky, for Basic Training with the Third Armored Division. Mirabelli learned the ins and outs of tanks, including operations and basic mechanics. Next, because of his knowledge of office equipment like addressing machines, Mirabelli was sent to Fort Lee, Virginia, to serve in the Army Finance Branch as a machine instructor at a newly created training school for Army Payroll Operations. Three months later, the school still had not opened, and Mirabelli was put on a train to California where he boarded a crowded troop ship to Korea.

During the two-week trip, he and his buddies didn’t talk about the war. “I really didn’t give it much thought,” Mirabelli says. “We had a little phonograph and listened to music.” He disembarked in Pusan, South Korea, and waited for orders along with the other soldiers.

Mirabelli was assigned as a driver on an M4 Sherman tank with A Company, 72nd Tank Battalion, Second Infantry Division. He and a crew that included an ammunition loader, a gunner and a tank commander nicknamed their tank “Agitator.” They supported infantry soldiers by clearing fields for troop movement, providing artillery cover and knocking out hillside fortifications. “When something happened, we’d get a call. They’d say, ‘Get in the tank, tanks are moving out, infantry is moving out to a certain hill,’” Mirabelli says. “They gave us bearings where we had to fire our weapons, and we’d fire large cannons at the North Koreans.”

Battles raged back and forth over the 38th Parallel in the rough, hilly terrain. The Americans would cross over the line and then get pushed back as the North Koreans crossed in the opposite direction. Thousands of soldiers fought for their lives in the hills, which offered protection and gave observation, artillery and mortar advantage to whichever country controlled them.

Between battles, Mirabelli and his crew kept their tank clean, loaded with gas and ammunition, and ready to move out at a moment’s notice. At night, they slept in rat-infested bunkers dug into the side of the hill and relied on heat from the tank engine for warmth. “There was a time when you wonder why you’re there,” Mirabelli says. “You’re fighting for your country!”

On Christmas Day 1952, Mirabelli and his crew were in their bunkers anticipating a holiday dinner when the call came in. “We jumped into our tanks and went up the hill to protect the troops that were out there, and that was it [Christmas or not],” Mirabelli says.

Mortar shells flew through the air, one of them hitting Mirabelli’s tank. “The sound was very loud, very deafening,” he says. “It hit the bogey wheels, and we were stranded.” Mirabelli switched places with the gunner, and the shells kept coming down. “One of them found its way through the broken hatch up on top and exploded inside the tank,” he says. Mirabelli’s left leg was hit. “All I know is when the explosion happened, I didn’t know what happened to me,” Mirabelli says. “The next thing I knew, the helicopter came down, and they put me in the basket.”

The chopper flew Mirabelli to a MASH unit for treatment. Laying there, talking to a doctor, he heard, “Do I hear the voice of Lou Mirabelli?” The medic on the other side of the curtain turned out to be Howie Johnson, an old football buddy. When his wounds were stabilized, Mirabelli traveled to a Tokyo hospital for surgery. While recuperating, he was presented with the Purple Heart. After three months, he returned to Camp Crowder in Missouri and was discharged.

There were a couple of bright spots while Mirabelli was stationed in Korea. “My sister sent me date nut bread in cans every few weeks,” he says. Mirabelli shared the bread with his crewmates, and they all looked forward to this special treat. Also, the Salvation Army somehow managed to safely follow the soldiers from hill to hill to provide them with donuts and coffee. “The Salvation Army was great,” he says.

Mirabelli enjoyed a successful career in furniture sales. He and his wife, Elvira, whom he married six months after returning from Korea, have been happily married for 66 years. They have three children — Enrico, Jodi and Lou — who gave them 14 grandchildren and 10 great-grandchildren.

Named after his grandfather, Enrico is a prominent family law attorney, former president of the Justinian Society of Lawyers, and current general counsel and board member of the National Italian American Sports Hall of Fame. His sister, Jody, recently retired from the media department at Moraine Valley Community College, and their brother, Lou Jr., operates Sweet Lou’s Chicago Style Dogs in Phoenix.

Shrapnel remains in Mirabelli’s leg as a reminder of a time he does not like to talk about. “Our country picked on us to go, we went and that was the end of it. We just did what we were told. No heroes, no nothing, just serving your country. That’s it.”