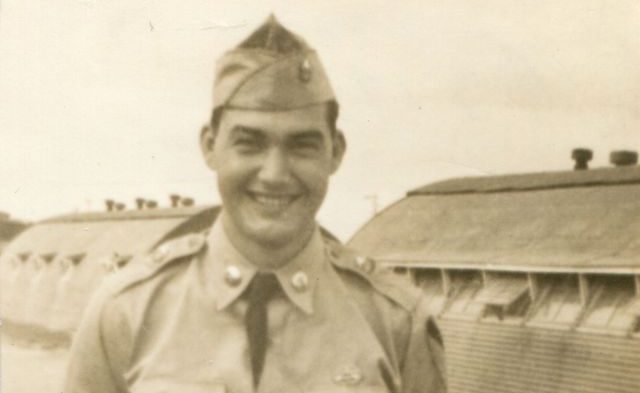 Having served as a weather observer in southern Illinois after World War II, Mario Ortigara never expected to be called back up and thrown into the teeth of battle in Korea.

Mario Ortigara was born in his parents’ home on the South Side of Chicago,  where brother Benny welcomed him. A few years later, sister Mary joined the family. Anna Panozzo and Domenico Ortigara were from small towns in the Piedmont region of Italy, where they met and married. They lost their first-born son to illness before immigrating to Chicago, where they settled in the historic Pullman area. Domenico was employed at the Blue Island Brickyard, and Anna was a homemaker.

Their neighborhood was a mix of many different ethnicities: Polish, Irish, Lithuanian, Slovakian and Italian. Ortigara explains that each nationality had its own Catholic Church, and his family socialized mostly within the Italian community. He attended St. Anthony Grammar School and Mt. Carmel High School. The Ortigara brothers began taking accordion lessons in 1935, laying the foundation for their future. Ortigara remembers playing handball and baseball in the neighborhood streets with his buddies. “There was very little traffic in the 1930s,” he says.

The Epiphany was a special feast day celebrated in the Ortigara family, and his mother prepared a delicious meal. “She was a very, very great cook,” Ortigara says. “My favorites were the gnocchi. My sister, brother and I, our favorite meal through our lives was gnocchi.”

Though World War II had ended, Ortigara was drafted into the Army after high school graduation. “You didn’t question it. If you got drafted, you got drafted,” he says. Ortigara reported for duty in December 1945 and completed basic training at Sheppard Field, Texas. Then it was back to Illinois for a six-month training course at Chanute Air Force Base, learning to be a weather observer. Ortigara remained there at Weather Central until he was discharged in November 1946. “We plotted maps and read information off the teletype machines,” says Ortigara. Weather forecasters used the maps to forecast weather for Army camps throughout the country.

He returned home to Chicago and managed the Casablanca Cocktail Lounge, a family-owned business, until he was hospitalized with rheumatic fever. After recovering, Ortigara attended Rizzo Conservatory, where he studied accordion and also began teaching at the Midwest School of Music, owned by his brother.

On March 15, 1951, Ortigara was drafted into the Army for the second time. The Korean War was going strong, and because Ortigara had previously served less than one year, he was eligible for the draft. “I didn’t think that I’d have to go again,” says Ortigara, “but they wanted me to do it, so I had to do it.” He was 24 years old, one of 15 others that he knows of at the time who had also been drafted twice. “We were called Primary Overseas Replacements, P.O.R.,” Ortigara says. “Get them over there as fast as you can, never mind the training.”

He received a two-week “refresher course” at Fort Leonard Wood, had a furlough and headed to Fort Lawton, Washington, where he boarded a ship to Japan and then on to Inchon, Korea. Ortigara was an infantryman with an M1 rifle. “So I was sitting thinking what am I gonna do with this rifle and heard they needed medics because they got shot up pretty badly, so I volunteered for that,” Ortigara says.

He trained for two weeks to become a combat medic, learning how to bandage a wounded man and get him out of the line of fire. Ortigara was attached to the First Cavalry Division, 8th Cavalry Regiment, 3rd Battalion King Company and was on the front lines in North Korea for six months before transferring to Hokkaido, Japan.

Ortigara lived in two-man foxholes right next to the infantrymen while in the battlefields. “I didn’t carry a rifle, I had a medical aid bag,” he says. “My job was not to fight; my job was to bandage the men that got wounded.” When he heard someone yelling, “Doc,” Ortigara left the shelter of his foxhole and ran to help. He quickly assessed the wounded soldier, bandaged him and put him onto a liter which carried him about two miles behind the front line to the “liter jeep” and driven about eight miles to the first aid station. Helicopters, used for the first time during the war, brought the more badly injured soldiers back to the division level.

Ortigara did not have time to think about his safety as he cared for the wounded on the battlefield. “Usually when the shells come in everybody’s digging as far as they can into their holes to save their life, and that’s the one time that the combat medic has to get out,” he says. “That’s the only time you have a job, when they are wounded, taking care of them.” He worried because he did not have a lot of training. “All I prayed for was that no one would die because of my not having the knowledge,” Ortigara says. “I was very fortunate that I was never wounded and everyone that I took care of made it back to the first aid station where a doctor got to see them.”

He moved from one combat area to another, establishing the perimeter, and building a foxhole. “You could be in one position for a month or two months and when the fighting was finished there, they would pull you back, put you in a convoy and bring you to another place,” Ortigara says. “Wherever they need you. Wherever the combat was going to be. Wherever you’re needed most.”

Ortigara remembers Thanksgiving 1951 as the worst battle. The first shell coming in hit a foxhole with four soldiers, killing them instantly. Shelling continued for 12 hours. “That was a very, very bad night, and the shells are exploding all over. If somebody calls for doc, you have to go out there and bandage them even though shells are exploding overhead. You’re risking your life to help someone, and that’s why I got the Bronze Star for Valor.” Ortigara says.

Ortigara was discharged on Christmas Eve 1952, returned to Chicago and worked at his brother’s music store. He married Cecilia Tribbia in 1953, and they raised their five children in Tinley Park. Now widowed, Ortigara enjoys spending time with his family, which includes 12 grandchildren and two great-grandchildren. He remains active at the family music store, formerly known as Midwest Music School and established in 1965 as Ortigara’s Musicville with Ben, Mary and Mario as partners. He belongs to various organizations, including the Korean War Veterans Association, American Legion and Veterans of Foreign Wars.

Ortigara remembers his time on the front lines and says, “When you’re out there, it’s like, ‘Just get me out of here alive, I’ll never complain again, Lord.’ For anyone who is in combat, from one minute to the next, you don’t know if you’re going to be there or not.”