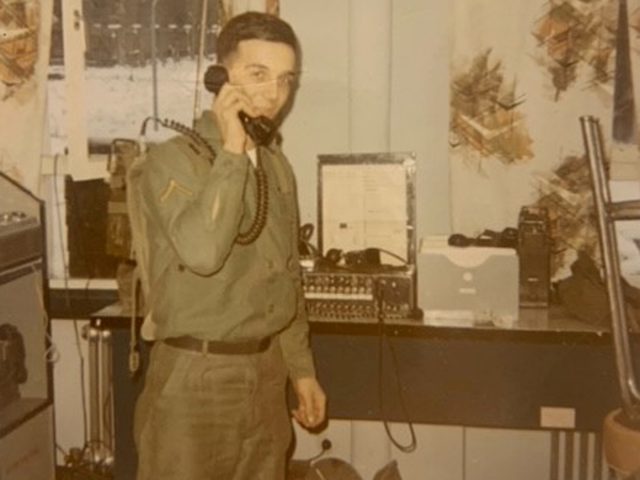 A communications specialist for the Army, Michael Pesola served in Germany during the Vietnam War as part of the team that kept the Soviet Union at bay.

The older of two sons, Michael Pesola was born in Chicago to Frank and Rose (Mancini) Pesola. His maternal grandparents emigrated from Calabria and his paternal grandparents from Bari. Pesola lived in the Taylor Street “Little Italy” enclave, close to his grandparents and extended family, who were right across the alley in a three-flat. He has vivid memories of the wonderful taste of his grandmother’s ravioli and of pressing grapes for his grandfather’s wine. “It was a unique neighborhood,” Pesola says. “People in the summer, sitting on their porches; fire hydrants shooting water out, playing in the cold water. All you would hear was chatter, chatter from all the Italian people.”

The family moved to Berwyn when Pesola was 10 years old. He graduated from Komensky Grade School and worked part time at Jewel Foods while attending Morton East High School. Upon graduating in 1965, Pesola worked full time while attending college classes.

He was drafted into the United States Army in 1967, two months after becoming engaged. The Vietnam War was all over the news. “They’re showing bad stuff, body bags. It was horrible. You’re watching in your living room,” Pesola says. “I was kind of scared.”

A good friend was drafted at the same time, and they attended basic training together in Missouri. “That was kind of nice,” Pesola says. “I had somebody to go with.” On the bus to Fort Leonard Wood, the soldiers were told, “You’re in a different world now. You’re in our world.” 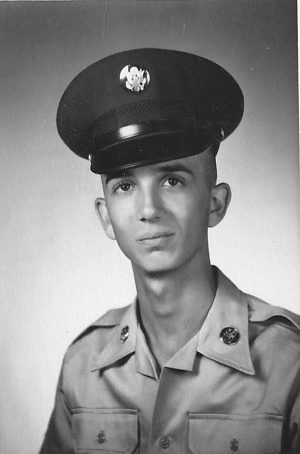 Pesola completed the eight-week program and transferred to Fort Huachuca in Arizona. He was assigned to Communications and trained to be a radio operator. He heard it was not a good thing to be a radio operator in Vietnam because the radio had a long antenna and was carried on your back, making you a target. “That made you even more scared, you know,” Pesola says.

He learned Morse code during a 10-week course. After he graduated, he received orders to transfer to New Jersey. At Fort Dix, he got paperwork to fly to Germany, board a train to Frankfurt and call Battery Headquarters from the station. He traveled alone, with no other soldiers. “Then, the fun started because a lot of the Germans did not speak English, and I didn’t speak German,” Pesola says. “When I got to the train station, I’m looking around, and I thought, ‘Oh my God.’ I was petrified.”

An American Army wife noticed Pesola having trouble with the phone and helped him convert his money to German currency and make the call. He was taken to Karlsruhe Base in Pforzheim. Pesola was assigned to Battery A, First Battalion, 67th Artillery USA Europe, and was stationed in an old Army barracks in the Black Forest. “There was nothing to walk to; you’re in the woods,” Pesola says. “That was really desolate and isolated.”

One hundred and fifty soldiers lived and worked at various stations within the barracks. Pesola reported daily to the Communications room, which was filled with radios, phones and switchboards. “The funny part about this whole story, when I got there, they said there is no Morse code here. You just pick up the phone and you talk,” he chuckles. “I go ‘What? After all that training?’”

Nike missiles were kept in underground silos a few miles from the barracks. “Communism was big, so that was really the reason I was there — to guard (Europe),” Pesola says. “Keeping an eye on the Russians was our main thing, not Vietnam.” The missile site was protected by double fences, with armed guards manning the guard towers 24/7. If a problem arose at any time of day or night, the guards called Communications. “We had the radios and they had a bunch of missiles, and our job was to make sure the communication was always working,” Pesola says.

He constantly cleaned, repaired, calibrated and tested the equipment. “So if we needed it, it was there,” he says. Communication problems occurred a few times, requiring Pesola to go to the missile site. “We had to track down the wire that wasn’t getting any power to the phone, splice that and put in new wiring,” he says.

After seven months in the Black Forest, Pesola transferred to Darmstadt, Germany. He was stationed at Kelley Barracks, close to town. Once again, he was within a few miles of a missile site, and his principal responsibility was keeping the lines of communication open to the guards protecting the site.

One memorable incident occurred at around 2 in the morning. Tower guards spotted someone lurking and sirens blared, so Pesola and the other soldiers rushed over, rifles drawn. They circled the area, and the interloper was caught without incident. Adrenalin pumping, Pesola did not feel fear at the time. “It seemed like we knew there was only one (guy) involved,” he says.

Occasionally, the soldiers went into town and were told to avoid certain areas. “Because of WWII, the older Germans were sometimes mean to us,” Pesola says. “I could remember walking by some old guys, and they spit at us.”

On Christmas Day 1968, Pesola and a few buddies went into town. They spotted a gasthaus, a combination restaurant and tavern, walked in and sat at the long bar. They were the only customers, the owner didn’t speak English and the soldiers didn’t speak German. Pesola noticed children peeking from a doorway, and the owner gestured for the soldiers to follow him to the back where he lived. There, they spent Christmas Day watching a circus on TV with the family. “That was like, ‘You’re kidding me?’” Pesola says. While he wasn’t able to spend Christmas on Taylor Street eating ravioli with his family, he will never forget the kindness of that German family. “They saw that we were alone,” he says.

Pesola returned to Fort Dix and was discharged on April 22, 1969, as Specialist 4th Class. He returned home to Berwyn and his job at Jewel Foods and married his childhood sweetheart, Barbara Reihel, in June.

Pesola owned and operated Michael’s Café and Deli in Oak Brook for 15 years. Since selling the business, he has worked part time in food services at a local high school. A recent widow, he lives close to his three children and six grandchildren, participating in their activities as much as possible.

Thinking back on his time in the military, Pesola says that being away from home was difficult at first, and training was rigorous. “They were pretty tough on you. They get in your face and so forth, and it was all for a reason — to keep you alive,” he says. He enjoyed his time in Germany and always remembers that Christmas Day with the German family. “We never said a word to each other,” he says. “We just sat and watched.”