As a radio intercept operator during the Korean War, Paul Greico and his team worked around the clock to snatch top-secret Chinese transmissions from the airwaves and pass them along for decryption.

The middle of three children, Paul Greico was born in Chicago to Dominic and Carmella Rosso Greico. The family lived at 718 S. Aberdeen St. Greico’s paternal grandfather emigrated from Potenza and eventually bought two apartment buildings connected by a courtyard. “Most of the family lived there,” Greico says. “I was surrounded by aunts and uncles.” His mother’s family emigrated from Calabria and lived in Cicero.

Greico’s mother passed away when he was only 12 years old. “We always had Christmas with the whole family at my grandpa’s apartment, and sometimes there were as many as 400 presents under the Christmas tree for all of us there. After my mother died, it was not that way anymore. It was hard,” Greico recalls. “Luckily, we had our aunts and uncles around to help us.”

Greico attended Jackson Grade School, graduating with an award as the Outstanding Boy in the Class.He went on to Crane Technical High School and worked at various jobs after graduating. His father remarried, and he and his wife had four children. “My lovely sisters and brother,” Greico says. 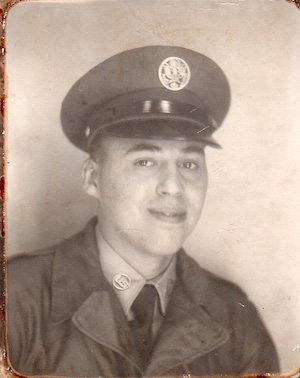 Rather than waiting to be drafted during the Korean War, Greico joined the U.S. Air Force. “We had a baseball team, and a lot of the guys thought it would be nice to enlist. We all went, and I think only a couple of us were accepted,” he says. “I was one of them.” Greico enlisted for a four-year stint on Jan. 9, 1952, and completed Basic Training at Lackland Air Force Base in San Antonio. It was Greico’s first time away from home. “The way my life was at that time with my mother gone, I kind of liked it,” he says.

Greico moved on to Keesler AF Base in Biloxi, Mississippi, where he attended radio school. One of the first things he learned was Morse code. He fulfilled the requirement of copying 20 words a minute and graduated from the course as a general radio operator. Next came radio intercept school, then back to Lackland for additional training, and on to Scott AF Base in Illinois for training as a crystal radio operator. Upon graduating, Greico returned to Lackland to await top-secret clearance. “I didn’t even know they were investigating me until they cleared me,” he says. “When I got home, a neighbor lady told me they had questioned her about me.”

Upon receiving his clearance, Greico was assigned to the 8th RSM Radio Squadron Mobile. His self-contained unit consisted of 42 Air Force members representing every possible job detail, from radio operators to cooks, overseen by two officers. The unit boarded the USS Mann with 75 vehicles and “a ton of equipment,” and shipped off to Japan. “The idea with all of that equipment that we carried, as far as I know, is if something should happen to the ship, we would try to get to the nearest island or whatever and set up a whole radio squadron,” Greico explains. “I was excited. I was finally going to see another country.”

The ship landed four days later in Japan. Greico was stationed at the Shiori AF Base just outside of Tokyo, where he remained for nearly two years. As a radio intercept operator, Greico worked in a compound on base where his primary responsibility was intercepting radio communications. “You had to have the right credentials to get in; I had top-secret clearance,” Greico says. “The building we worked in had no windows, APs (Air Police) at the door, firearms on all the walls in case — it was a secure compound.”

The room was separated into cubicles equipped with typewriters that had rolls of paper feeding through them. “All you do is you have your headsets on and tune in to the transmissions,” Greico says. “They were constantly transmitting code, and we intercepted it, copied it down and then it was sent downstairs to the Crypto Room where they deciphered it.”

Greico was among 20 men in the cubicles, all doing radio intercept in shifts so they could operate 24 hours a day. He worked at least eight hours a day and somehow never pulled the overnight shift. Greico also monitored and recorded the location of U.S. planes flying in the area. He found his job to be very interesting. “We got pretty good at it, too,” Greico says. “It was mostly the Chinese we were copying. We did receive a few commendations for some good stuff that we intercepted.”

Greico worked a cycle of three days with one day off. After the third cycle, he got three days off. He formed a close bond with his peers, and they enjoyed their time off together. “You’re working so close to these guys, and we’re all away from home, so that’s our life.” Plenty of activities were available on base, and Greico played on a football team. When they had three days off, they went exploring in Tokyo, the surrounding area and Yokohama. “It was very interesting … a beautiful country,” he says.

They experienced no problems with local residents. “They treated us very nice,” Greico says. “I was surprised at how we were treated because of World War II. The older ones were nicer to us than the younger ones.” He became friends with a shoemaker who invited him home to meet his family, and Greico visited several times. “I used to bring them gifts that they needed like clothes, washing powder and stuff like that,” says Greico. The shoemaker asked Greico how many sisters he had. “He made shoes for my sisters, which was really nice of him. I didn’t ask him to do it,” Greico says. He sent them home along with other souvenirs he bought, such as dishes for his stepmother and kimonos for his sisters.

Greico left Japan in December 1955, flew to California and was discharged with the rank of Airman First Class. He returned home to Chicago and took classes under the GI Bill at various neighborhood colleges. He worked as an accountant at Quaker Oats Company for 18 years, an officer manager for a company in Rosemont, and eventually owned and operated two bowling alleys. He and his wife, Corinne Campo Greico, married in 1957 and have four children, 15 grandchildren and three great-grandchildren. “Family is everything,” he says.

“It was something I’m very proud of,” Greico says of his time in the military. “I still wear my Air Force hat, and some people say, ‘Thank you for your service,’ and I’m very proud of it. I was glad I went. It was good training.”