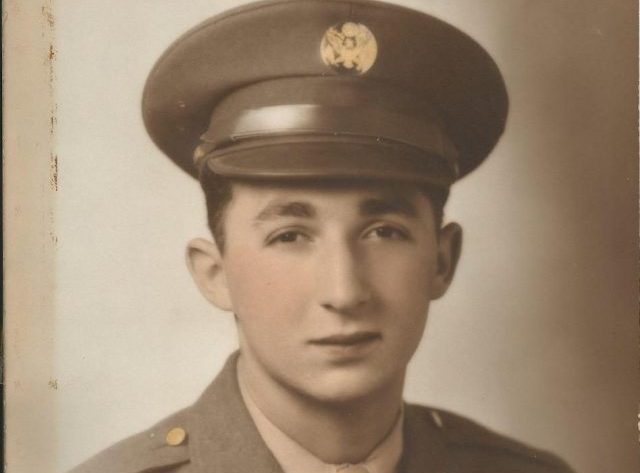 Drafted into the Army right out of high school, Tony Figlioli fought his way across Europe, earning five Battle Stars, a Purple Heart and a Bronze Star along the way.

The oldest of two boys, Tony Figlioli was born in Marsala, Sicily, in 1924. His father, Vito, came to the United States at the age of 17, fought in World War I, returned to Italy, married, and traveled back to the States. When Figlioli was 2 years old, his father had earned enough money to send for his wife and son to join him.

The family first lived on the South Side of Chicago and then settled in the Italian enclave at Taylor and Racine. Figlioli remembers the close-knit neighborhood and family and friends gathering together for Sunday dinners. “I didn’t think anyone was poor because we were all in the same boat,” he says.

Figlioli attended Skinner Grade School and graduated from Crane Tech High School in January 1943. One month later, he was drafted into the U.S. Army. Figlioli, who had tried to enlist while still a student, says, “I felt great, I was ready to go.” His parents were “scared, frightened, but proud.” His father had seen action as a doughboy in WWI and because of this experience, “I’m sure that he was more afraid than my mother,” Figlioli says.

Figlioli completed four months of basic training at Fort Warren in Wyoming and two months of additional training at Camp Ellis in Illinois. He was attached to the 101st Airborne Division and in December 1943 he traveled by troop train to Halifax, Nova Scotia, to embark overseas on the lle de France.

Filled with more than 5,000 soldiers, the ship sailed the northern route to avoid enemy submarines. Stormy weather, rough seas and icebergs made the crossing treacherous. Five days later, the ship docked in Glasgow, Scotland. “All of us guys were pretty gung ho,” Figlioli says. “We were anxious to go overseas and fight for our country.”

The men boarded a train to Lands End in the lower part of England and settled into a makeshift camp. Figlioli remembers wooden barracks that were about 70 feet long and lined with beds on both sides with only two small charcoal burner stoves for heat. “You practically had to sit on one to get warm,” he recalls.

Figlioli engaged in more training and maneuvers as the soldiers prepared for combat. As sergeant, he and his 12-man squad became scouts for their unit. His job during training was to “make believe and locate places where camp could safely be set up to make coffee and bread for the 101st Airborne,” Figlioli remembers. “We baked tons of bread.”

On D-Day, June 6, 1944, the 101st parachuted in and on June 9, Figlioli and his men approached Utah Beach on LSTs (Landing Ship Tanks). Three LSTs carried about 75 men each, and as they got closer to shore, Figlioli heard the constant barrage of the big guns. “This is it,” he thought, telling his squad, “Now we’ll know the men from the boys. … Well now, we want to be the men!”

The front flap dropped open and Figlioli led his men through the shallow water to the beach. The scene was gruesome: Bodies floated in the water and the beach was littered with American soldiers who were killed during the invasion. “We saw all these bodies,” Figlioli says. “We felt pretty badly.”

Figlioli carried a Thompson submachine gun and a .45 pistol as he led his squad inland. The terrain was rough and wooded with hedgerows all over. On the second day, Figlioli found a safe spot to set up camp, the location was radioed back to the rest of the outfit and trucks came in with the bakery ovens. The sounds of combat were continuous, “especially the big guns … cannons and 88s,” Figlioli recalls.

The squad kept moving forward through towns until they reached the Battle of the Bulge. Figlioli was scouting with his partner in the snowy cold when he suddenly sank into a soft spot. He felt something hit his shoulder and thought it was his backpack. His partner said, “Sarge, he’s up there!” and shot a few rounds. Figlioli kept walking and shooting and saw blood dripping off the barrel of his gun. “And that’s when I really knew that I got hit. I never felt the pain until then. In the excitement and adrenalin, I didn’t feel any pain.” The medic sewed up his shoulder and Figlioli returned to combat. “There was no place to go,” Figlioli says. “We were trapped!”

The men took shelter in foxholes, camouflaging them with tree trunks. “You only slept in fits: an hour here, half hour there,” he says. “You were always cold … always cold.” After about a month of being trapped in the forest, Figlioli’s unit was finally relieved by General Patton’s 3rd Army and they moved into Germany.

Scouting in Augsburg, Figlioli spotted hundreds of German soldiers in the distance coming down the road. His squad was outnumbered! A member of his squad who spoke German said, “I think they’re surrendering, Sarge. They look raggedy.” The pair moved closer to the approaching enemy and their colonel lifted his arms and asked Figlioli if he was in charge. He answered, “Yeah,” and the colonel responded, “Well, we’re surrendering!” and he handed his Lugar to Figlioli.

Figlioli’s squad of 12 led the 200 German soldiers a couple of miles back to camp where he remembers, “Everybody’s eyes popped out” as they marched in. “They were ready and willing to give up,” Figlioli says. “They were afraid of the Russians.”

Figlioli stayed outside of Augsburg until the war ended in Europe. He remembers all the battles and destruction and says, “I saw small villages and cities where the highest wall wasn’t higher than my head. We had bombed it all out, first the planes and then the artillery. The smell was terrible because there were bodies inside the debris and you’re glad it isn’t you.”

Figlioli returned home to Chicago, was discharged in September 1945. He received five Battle Stars, one for each of the major campaigns in which he fought; the Bronze Star for heroic/meritorious achievement in a combat zone; and a Purple Heart for wounds received in action. He attended George Williams College for five terms, intending on becoming an athletic coach. But, influenced by his buddies, he took a test to become a policeman, scored high and joined the Chicago Police Department in January 1946. He retired 40 years later, attaining the rank of sergeant.

He married his wife, Wilma, in 1951, and they have four children and seven grandchildren. He is active with a hunting club, he still golfs with his wife and he recently spoke about his war experiences in his grandchildren’s classrooms.

Reflecting on the war, Figlioli says, “You’re really not thinking much, you’re thinking of tomorrow. … Am I going to be here tomorrow? What’s going to happen?”