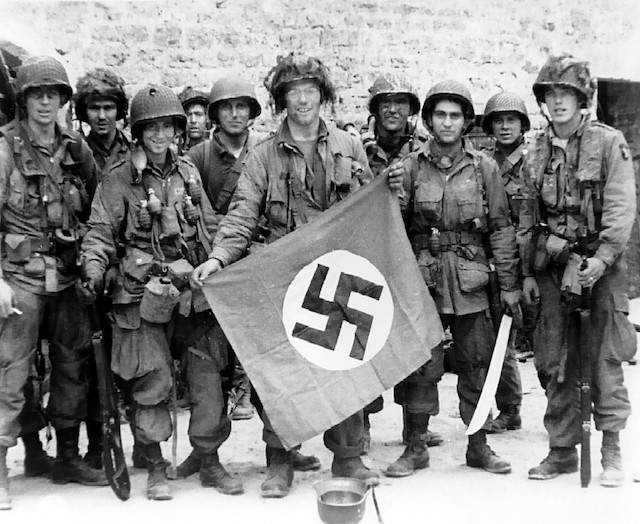 Venditti (to the left of the soldier holding the flag) and his band of brothers.

As a paratrooper for the 101st Airborne during World War II, it was Louis Venditti’s unenviable duty to jump behind enemy lines in the pre-dawn hours before D-Day and pave the way for the Allied assault.

Louis Venditti was born in Chicago and grew up in the Hungry Hill neighborhood of Chicago Heights. He attended Bloom Township High School and was working in a factory that manufactured landing mats for airfields in the South Pacific when he was drafted into the Army in November 1942.

Venditti completed basic training at Camp Beale, Calif., and was attached to the 13th Armored Division. He learned how to drive everything from a motorcycle to a tank.

Two new airborne divisions were being formed, and when officers came around asking for interested men, Venditti volunteered, saying, “Sure, I want to jump out of an airplane!”

He went on to Fort Benning, Ga., where he learned the ins and outs of parachuting.

In the winter of 1943, Venditti boarded a crowded troop ship, crossed the rough North Atlantic Ocean and landed in Liverpool, England. He was with the 101st Airborne, preparing for an invasion by participating in daily maneuvers, which included combat training and studying sand tables of the projected jump areas.

Training continued until the end of May, when Venditti learned that the Normandy invasion was his objective and, as a paratrooper, he would be among the first men in, jumping behind enemy lines.

Venditti clearly remembers the D-Day invasion. The night of June 5, 1944, the paratroopers geared up and boarded their planes. General Dwight Eisenhower came around to each plane and talked to the men as long as he could before takeoff.

They ran into a fog bank as they reached the French coast, and when they came out, the low-flying planes were detected by the enemy. They were hit with all types of artillery: anti-aircraft guns, machinegun fire and small-arms fire.

Just off to his right, Venditti saw a plane get hit and spiral downward. The jumpmaster told the men to stand up, hook up and prepare to jump in case their plane was hit.

Nearing his jump zone, Venditti parachuted right after midnight under gunfire all the way down. “How I survived those few minutes, I have no idea,” he says. “I was very lucky.”

He landed in a field surrounded by hedgerows. “That kind of protected me a little bit,” he recalls. He peered through the darkness and discovered that nothing looked like the maps and photos he studied in England. “Right away panic set in,” he remembers. “I was really petrified.”

Venditti spotted movement, thought it was the enemy and was relieved when he saw cows instead of German soldiers. “That made me happy because where there’s cows, there’s no land mines,” he says.

Moving cautiously along the hedgerows, he met up with two other paratroopers. They knocked on the door of a farmhouse and two frightened farmers, relieved to see the American flag on the soldier’s sleeves, helped the paratroopers determine that their rendezvous spot was about two miles away.

They met up with more paratroopers along the way, using clickers almost continuously to find one another in the darkness. In the jump zone, Venditti saw paratroopers hanging from the trees, shot and killed in their parachutes. “Oh God, that was something you don’t want to see,” he says.

Less than half of the 600 paratroopers reached the spot, and General Taylor led them to their objective, the capture of Pouppeville and Causeway 1, the road leading inland down to Utah Beach, so the 4th Infantry Division could land.

Venditti’s battalion captured the town and waited for the invasion to begin. The Air Force bombed at 6 a.m. and the Navy started shelling at 6:30 a.m. Venditti moved in closer to the beach and saw all the ships. “There had to be thousands of them,” he recalls.

When the first of the soldiers who landed came up to Venditti and said, “Boy are we glad to see you!” he responded, “No buddy, you got that all wrong, I’m glad to see you!” If the invasion failed, Venditti and the other paratroopers would have been trapped behind enemy lines. “That night, no matter where you turned, there was a German,” he recalls. “Those were the most terrifying six hours I ever had.”

Venditti fought in Normandy for a month and his next mission was Operation Market-Garden. He jumped 20 miles behind the line in Holland where his objective was to capture bridges so the British-Canadian infantry could advance.

The fighting was non-stop and shrapnel was flying through the air. Crouching in a ditch, Venditti watched as the Germans approached, “walking artillery” toward them, setting it down every 75 yards, and firing. Suddenly, a shell landed behind him and a piece of shrapnel struck him in the foot. “If I was facing the other way, honey, I wouldn’t be here talking to you,” Venditti says.

He recuperated, rejoined his unit near Paris, and headed to the Battle of the Bulge.

The fighting in the Ardennes forest was as fierce as the weather. Venditti remembers burning charcoal in his foxhole to keep warm, and rubbing his feet to prevent frostbite. “I’m still cold, honey,” he says. “When the cold comes, I’m still cold.”

As the battle raged, Venditti saw countless soldiers wounded and killed. “When you’re in the thick of battle, your adrenalin is running and the only thought is to survive and to come home safely,” he says. “Your buddies are dropping around you and you wonder why them and not me.”

Near the end of the war, Venditti went through an abandoned concentration camp where only the dead and the dying remained. “Those are memories I don’t want to remember at all,” he says.

Venditti was discharged in November 1945 and returned to Chicago Heights, where he still resides. Widowed, Venditti has two children and two grandchildren. He is a retired Chicago Heights Fire Department captain.

His decorations include the Bronze Star, Purple Heart and the French Legion of Honor, which was presented to him in Normandy on June 6, 2009, on the 65th anniversary of the D-Day invasion.

At the ceremony, Venditti met French President Nicholas Sarkozy and his Italian wife, Carla Bruni; President and Michelle Obama; and Prince Charles. Venditti lunched with actor Tom Hanks, whose movie, “Saving Private Ryan,” was about the 101st Airborne Division. Venditti reflects on receiving the award and says, “It was an honor for me, a little Italian kid from the old neighborhood.”

For a pair of blog posts about Louis’ wartime memorabilia, click here.