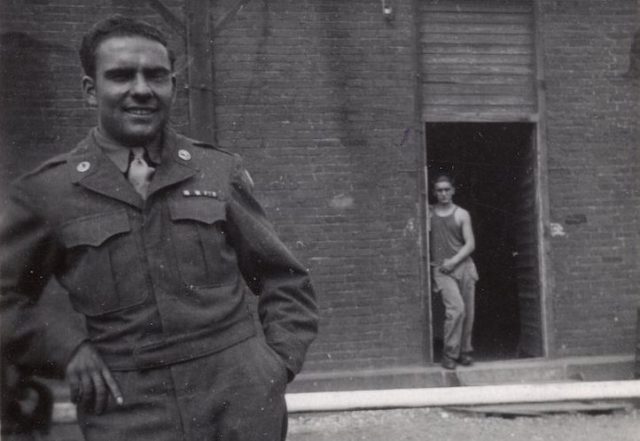 Fluent in several languages when he entered the military, Egidio Mangiardi became part of a Military Intelligence Unit that operated throughout Europe during World War II.

Editor’s Note: Egidio passed away in January 2018. This article was published in the August 2016 issue of Fra Noi and is being republished here in his memory.

One of 11 children, Egidio Mangiardi was born in 1921 to Concetta and Bruno Mangiardi in Spadola, Italy. Graduating from the local grammar school and going to the town of Vibo Valentia to continue his education, Mangiardi needed only one more year of studies to become a schoolteacher when his father was stricken with cancer.

At the time, his father and older brother were living and working near Austin and Madison in Chicago. His brother had a family to support and his father was sending money home to his wife and younger children in Spadola. Now Mangiardi’s help was needed. He crossed the Atlantic along with his sister in 1939 and moved in with his brother and family. Upon his discharge from the hospital, his father returned to Spadola to spend his final days.

Already fluent in French and Latin, Mangiardi studied English at Austin High School and attended Dante School in the Taylor Street neighborhood with other Italian students. He quickly earned his 8th grade diploma and two years later graduated from Austin High. Along with attending school, Mangiardi worked at various jobs, earning money to send home. His family needed money and his sisters needed dowries! And so carrying a dictionary under his arm to help him communicate in English, he found work.

Drafted into the Army in 1942, Mangiardi completed basic training in Cheyenne, Wyo. Based in part on his ability to speak several languages, he was chosen by the Military Intelligence Unit and transferred to Camp Ritchie in Maryland.

Its proximity to Washington, D.C., along with the remote location and rugged terrain, made this an ideal training facility. Secrecy prevailed as soldiers were told not to tell anyone, not even their families, they were with military intelligence. During the intense eight-week session, all ranks of soldiers studied together morning to night, learning such things as signal intelligence training and interrogation techniques. “At that age, it was not difficult,” Mangiardi says. “I found it very interesting.”

Close combat training was taught in a mock German village built at the camp. Many of the soldiers were German Jews who fled the country during the beginning of Nazi control. They came to the United States, joined the Army and were stationed at Camp Ritchie, where the soldiers were nicknamed the “Ritchie Boys.”

“We had to know what kind of plane was coming from the engine noise. We had to learn to recognize a soldier from the uniform,” Mangiardi says. “We had to know how to behave and how to get information.” He traveled to an Army base in Oregon to teach American soldiers how to act in case they were taken prisoners. “Say only your first name, last name and serial number,” he taught them. “Say no more!”

Prepared for battle, Mangiardi shipped out to England with the Military Intelligence Unit. Once there, he remembers boarding a train and the Salvation Army feeding all the troops. He traveled to Northern Ireland for more intensive training and then returned to England. In London, destruction was everywhere. Buildings were in ruins, collapsed into heaps, and streets were filled with rubble, “What could you do, it was a war,” he recalls. “Wherever you went you saw some bombing.”

The Germans launched their V1 flying bombs, called “doodlebugs,” over London. “We used to watch these planes,” Mangiardi says. “As long as we saw the flame, the motor was on and there was nothing to worry about. We knew it would keep going.” Once it ran out of gas, the plane spiraled down, exploding on impact. “We were watching the flame. If the flame ran out, we tried to run and hide someplace … anyplace … you got used to it.”

From London, Mangiardi travelled around Belgium, Germany and France, often translating for the American officers. The soldiers occasionally lived in abandoned homes in towns taken over by the Allies, and at one time in a castle in Northern France. In Germany, they had no food, and Mangiardi took on the responsibility of rustling up provisions for the soldiers.

Continuously honing their military intelligence skills, the soldiers participated in training exercises whenever possible. One in particular, in Northern France, stands out in Mangiardi’s mind. Soldiers, either alone or in groups of two or more, were taken blindfolded and dropped off in the mountains. Relying upon their extensive training and skills, they had to find their way back to camp. Mangiardi recalls, “At that time it was fun.”

He was stationed for a time at the Maginot Line, situated at the border of France and Germany. The line of defense included 22 large underground fortresses and 36 smaller fortresses, as well as blockhouses, bunkers and rail lines. Engaged in battles at the line, Mangiardi recalls, “bombs and gunfire, on and off, on and off.” Bombs flew through the air and the soldiers tried to stay close and look out for one another. “We were scared when the bombs came close,” says Mangiardi. His group suffered casualties, but thankfully no fatalities, “We tried to help whenever it was possible,” he recalls regarding the wounded.

Mangiardi was able to spend some time in Versailles and Paris. “I was lucky. I always had a lot of fun because I spoke the language.” He was in Fontainebleau, France when the war ended. The soldiers were thankful and excited, “We went out and got drunk,” he recalls. Before heading back to the states, Mangiardi traveled to Italy to meet with his mother and family in Spadola: the first time he saw them since leaving home in 1939.

Discharged in 1945, Mangiardi returned to Chicago and then moved to California. After operating a restaurant for three years, he came back to Chicago, where he was a successful salesman for Metropolitan Life. He then launched a second career operating a currency exchange in the city. Mangiardi married his wife, Maria, in 1965 and they have a close-knit family of three children and six grandchildren.

Always the provider, from sending money home to Italy for his sister’s dowries, to foraging for food for his soldier buddies, to sponsoring and providing for his two brothers and their families to come to Chicago from Italy, Mangiardi says, “The Army was a good teacher!”