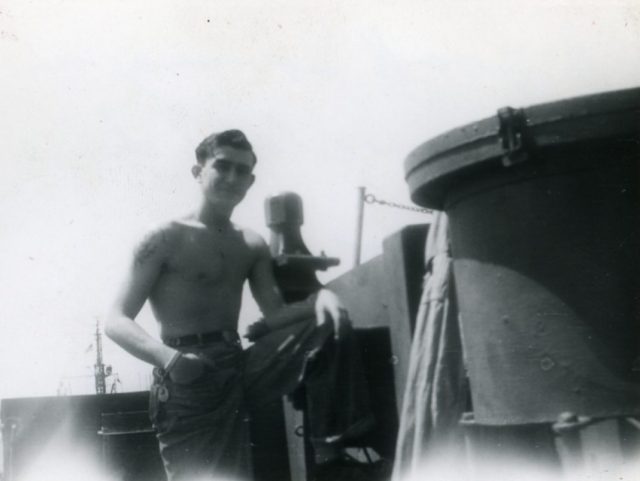 Carl Liture saw plenty of action on board the Shangri-La, which nevertheless survived World War II without sustaining serious damage.

Carl Liture was born and raised in Chicago. He joined the Navy when he was 17 years old, suffered an attack of appendicitis the same day and was sent home.

In March 1944, at the age of 18, Liture was drafted and he asked to be in the Navy. He trained at Camp McCoy in Farragut, Idaho, and then transferred to Detroit, where he learned to be a machinist mate.

Liture was a fireman first class, and after further training was assigned to the USS Shangri-La, CV38, a newly commissioned carrier.

After the shakedown cruise, the Shangri-La loaded up with supplies, sailed down through the Panama Canal and headed out to the Pacific. There were 2,000 sailors on board along with 50 Marines. The Shangri-La carried 100 planes, SB2Cs and Corsairs.

As the pilots practiced landing on the carrier, some ended up in the ocean. Liture watched as porpoises pushed at the men with their snouts, keeping them above water and leading them to the safety of the recovery boats.

Liture was a machinist in engine room No. 1, where he cared for the water pumps that cooled the propellers that moved the ship forward. 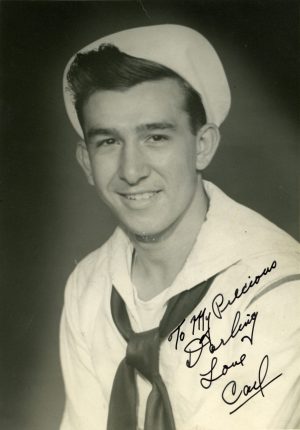 The Shangri-La traveled in a convoy with the Fifth Fleet and was fired upon about a dozen times during the two major battles in Okinawa and Tokyo Bay. Liture felt the jolt when the Shangri-La was hit and sailors scrambled to locate the damage. Often, pipes burst or leaked from the impact, and it was important to repair them as soon as possible to prevent loss of steam pressure.

While in combat areas, the ship traveled without lights and Liture was stationed at general quarters in engine room one, close to the telephone. He wore headphones to keep in contact with topside 24 hours a day. A sailor called down to tell him how much water to pump into the propellers to keep them cooled so the bearings would not wear out. He was also alerted if the ship was making smoke, which would give its location away to the enemy.

Once the “all clear” sounded, Liture went up top. He watched the planes as they returned from a raid. He said, “It was a fine experience watching pilots come in and land that thing on a tiny ship.”

Raids were made on several islands including, Leyte and Pie. The pilots targeted caves to flush out Japanese so American ground troops could land. Liture said they did not lose too many pilots: “We were pretty lucky.”

He remembered watching American ships, one after another, firing at the small islands. Liture said, “It was quite a sight to see.”

In the Okinawa battle, Liture came topside to see the USS Franklin billowing smoke and listing in the ocean about 200 yards away. Survivors from the Franklin and other torpedoed ships were plucked out of the water and brought on board. During the rescue, Liture’s thoughts were, “hopefully, we can get as many as we can.”

A hospital ship met them and the wounded were transferred. The Shangri-La was also hit in that battle, but not seriously. It was repaired in Honolulu and returned to Okinawa and then on to Tokyo Bay.

As the islands were taken, Liture set foot on them. He saw destruction and bodies hanging in trees. He said, “What I saw, I didn’t like.”

The islanders were friendly. Liture said, “They appreciated that we were there and we appreciated what they did for our boys.”

A highlight was the signing of the peace papers. Liture and his shipmates sat on an adjacent desk with his shipmates and watched the signing of the surrender documents aboard the USS Missouri. “I could actually see the Japanese in their high hats and silk coats, and MacArthur and all our military leaders,” Liture said. “The deck of the Missouri was a sight to see, and there we were, witnessing history!”

Liture was discharged in May 1946. He is the vice commander of the Italian American War Veterans, Post #1, and is looking forward to a USS Shangri-La convention in Branson, Missouri.